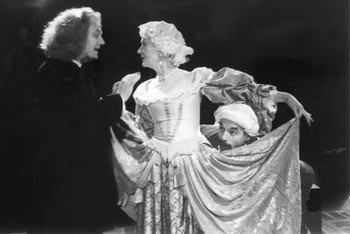 THREE CHEERS are in order for the cast of Cinnabar Theater’s production of Three Tall Women–brava, brava, brava! Director Deborah Eubanks’ tiptop troika of actresses is a smashing complement to Edward Albee’s Pulitzer Prize-winning vivisection of an old woman’s psyche, making for some of the finest theater this season. A seriocomic exploration of love, death, and myriad existential conundrums, Three Tall Women has a first act that’s as simple as ABC–literally. In an interesting stylistic turn, Albee shirks the notion of proper nouns, opting instead for alphabetic appellations.

Enter capricious 92-year-old widow, “A” (Laura Jorgensen), whose finances are being sorted out by young attorney “C” (Kate Sheehan), both of them trading wry banter with “A”‘s middle-aged, live-in caregiver, “B” (Joan Hawley). The mordant trio lathers on the blather as a century’s worth of emotional experience comes tumbling forth from “A” in an avalanche of anecdotes and confessions–some comic, others cheerless, but all expertly conveyed by Hawley’s faultless characterization (she is generations younger than her elderly character, but she plays age with aplomb).

Resentful, cagey, and unhinged by encroaching senility, “A” has a particularly painful recollection that plunges her into an act-closing coma. When the play begins again, the acerbic grande dame is portrayed by all three actresses in three life stages (think Edvard Munch’s painting Girls on a Jetty), parsing out her experience, awaiting the inevitable.

Sheehan shines here as the spritely and pugnacious young woman–her innocence is as beguiling as it is endearing. Likewise, Jorgensen’s dry-martini performance as the middle-aged “A” perfectly bridges the chronologically and spiritually disparate younger and older “A”‘s. These characters aren’t simply sounding boards for old “A”‘s many monologues; they’re whole people deftly brought to life by stellar performances.

Throughout, “A” schools her youthful selves with the portentous line “You’ll see.” This also applies to any self-respecting theatergoer. You’ll see Cinnabar’s Three Tall Women.

SHAKESPEARE HURLED countless neologisms into the English language, so why not French dramatist Molière? The playwright managed a crossover with tartuffe, a noun describing a hypocrite who affects religious piety–traits embodied by the title character of Molière’s masterpiece, Tartuffe, now playing at Sonoma County Repertory Theatre.

Directed by Jim DePriest from a singsongy English verse translation, Tartuffe details the misadventures of a mock-pious charlatan who insinuates himself into the wealthy graces of guileless Orgon (Tom McIntyre). The hapless mark believes that Tartuffe is the epitome of humility and a moral example for his reproving family, who see through the manipulator’s shenanigans. Hanging in the balance is the hand of Orgon’s daughter Mariane (a plucky and animated Sheeka Arbuthnot), the fidelity of Orgon’s wife, Elmire (crisply played by Caroline McKinnion), and the family estate, the deed to which Orgon signs over to Tartuffe in a fit of brotherly love.

Crucial to the play’s success is the transparency of the con man’s pious veneer. Like Orgon’s family, the audience must ask the question “How could Orgon be such a sucker?” Interestingly, Kesser plays Tartuffe opaquely, his piety seemingly genuine, with nary a nod or a wink to indicate his deception. His Tartuffe is eminently likable until his nefarious plans are revealed, and even then you still would loan the guy bus fare.

Though novel, Kesser’s about-face is not supported by Molière’s text, which relies on Tartuffe’s diaphanous persona. The result is an interesting but uneven production.