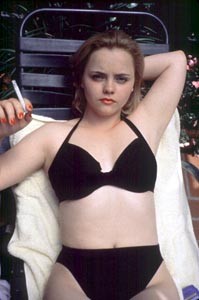 The Opposite of Sex.

In praise of Christina Ricci

THIS IS A SONG of breasts and thighs, peachy upper arms and a bubble butt. This is a hymn to the hint of a double chin, to a stomach that puffs up from under belts, to legs–as Scott Fitzgerald once wrote–that sink into shoes without the benefit of ankles. This is a heterosexual love poem to Christina Ricci, a young actress who proves that a blonde bombshell still has the right to explode. (Here’s hoping that her suddenly svelte form on a recent cover of Premiere is just a passing fancy.)

Anchored by a sweet smile and custardy breasts, Ricci is a kidnapped girl who play-acts the role of wife to Vincent Gallo’s more-than-just-troubled husband in the recently released-to-video Buffalo 66. The trailer to this film neglects Ricci’s cherub face altogether and shows only her bosom, her name slung across the breasts like a Miss America swag, giving the viewer a clue to how Ricci will be seen for the duration of the film: as tits that can talk.

Clad for Buffalo 66 with the innocence of a baby doll in a baby-doll nightie masquerading as a dress, Ricci moves with a jiggly purity that never allows her character unseemly carnality, refuses to suggest sluttishness, and defies such smears of whoredom as silver high heels, sparkly blue eyeshadow, and slip straps seek to bestow. Instead she is an overfilled angel, a cream cake with sugary thighs who shows no hint of a clavicle and has nary a muscle that isn’t smoothly encased in flesh. Nothing on Ricci bristles when it can undulate, no ripples appear that aren’t caused by exhaling, and her rear could never be described as less than ample.

How in Hollywood’s gym-culture has this woman gotten job after job as a sex queen? And who’d have guessed from watching the dour eyes and dark braids displayed in The Addams Family that Wednesday’s child would be so full of grace? Whether sweater-shrugging the seduction of a gay man in The Opposite of Sex or juggling down the pants of a frightened pubescent in The Ice Storm or rolling like a tube of cookie dough toward Gallo’s intense angularity on a motel bed in Buffalo 66, Ricci has nothing whatsoever in common with today’s notion of strained muscular beauty. She doesn’t even match the perfect size 12 waist of Marilyn Monroe in The Seven-Year Itch.

Like Drew Barrymore, Ricci displays a voluptuous milkshake beauty that must drive other actresses crazy. Surely she pays homage to the Stairmaster, but it’s hard not to imagine a plate of profiteroles sitting where the Evian should be. Yet there is nothing overfed about Ricci. Rather, she has the sturdy girl-next-door bounty of real girls–plus those custardy breasts. And it is her repeat portrayals of real-girl wickedness and real-girl sexuality that keep one riveted to the screen after the allure of breast and hip and impossibly round thigh begin to fade.

Ricci’s wan hitchhiker camping out in Johnny Depp’s nightmare hotel room in Fear and Loathing in Las Vegas gives the parent-chills to any who watch her. Her need to be returned immediately home to a five-food-group meal is shockingly apparent. In The Ice Storm, Ricci’s portrayal of sexual awakening lasts longer than Sigourney Weaver’s triumph at a key party, leveled as it is by Ricci’s head resting childishly on film-dad Kevin Kline’s shoulder as he carries her home. Even her black-bra’d flauntings in The Opposite of Sex eventually make some sense of why anyone would wish to ruin the life of her perfectly nice half-brother. And in Buffalo 66, Ricci gives meaning and rhythm to a role that should only provoke us to ask why the hell such a pretty young thing would hang out with a gaunt creep like Gallo.

In all these films, there is an inevitable moment when the viewer wants to scream “Run!” at Ricci’s pouting visage. But she’s stubborn and never does. Rather, she scowls at the Watergate hearings, tans her tummy by the pool, or sits on a mound of filthy Vegas carpet to wait it out. And with her sits enough creamy-silk real-girl flesh to make two of Parker Posey.

As most actresses seem to consist of little more than what’s left of a chicken after a barbecue–bones and a bit of skin–it’s heartening to see that someone as heroically built as Christina Ricci still gets to fill out a role, because she’s certainly got the talent to do it.