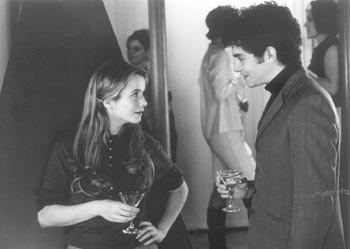 Poet Jane Hirshfield on genius, happiness, and the film ‘Hilary and Jackie’

Writer David Templeton–driven by an impulse he has never properly explained–takes interesting people to interesting movies in an ongoing quest for the ultimate post-film conversation. Each discussion is taped, labeled, and cataloged. When moved to do so, Templeton shares these tangential chitchats with the public. This time out he takes renowned poet and teacher Jane Hirshfield to see Hilary and Jackie.

JANE HIRSHFIELD gazes down at the round, white, marble-topped table between us. Sliding her decaf mocha to one side, and placing both of her hands on the cool, smooth stone, she glances up and smiles.

“They talked about wanting to be special,” she says, referring to Hilary and Jacqueline du Pré, the two real-life sisters at the center of the provocative new film Hilary and Jackie. Now seated at a small cafe in downtown Sausalito–Hirshfield lives in nearby Mill Valley–we’ve already found much to discuss since seeing the film at a nearby theater.

“Special,” Hirshfield repeats. “Well. I would say this about being special. Special doesn’t matter. This tabletop is not trying to be special. It doesn’t need to. It is sufficient in itself. As a matter of fact–it’s perfect.”

“At the very least,” I reply, now gazing at the table myself, “it certainly isn’t unhappy.”

Jacqueline du Pré, on the other hand–as portrayed in the film by Emily Watson–was most decidedly unhappy–this in spite of enormous international success as a concert cellist in the 1960s. The real Jackie du Pré died at the age of 42, a victim of a long illness, multiple sclerosis, that ended her career years before taking her life. Conversely, Hilary du Pré–who with her brother, Piers du Pré, wrote A Genius in the Family, the book on which the film is based–traded her own dream of playing the flute in concert for the less-glamorous role of mother and wife. Initially considered the more gifted of the two, Hilary (played by Rachel Griffiths) watched as her sister, by sheer effort and stubbornness, essentially willed herself into becoming a world-class musician. Ironically, it was Hilary who found the deeper happiness that always eluded Jackie.

“That’s one of the things that I found so interesting in the movie,” Hirshfield says, “that Jackie became a great musician out of envy. ‘God damn it, I will be noticed!’ Through sheer willpower, she changed roles with her sister. She became the genius.

Hirshfield, renowned as a poet and teacher, is the author of numerous award-winning books of poetry, including The October Palace and The Lives of the Heart. She edited Women in Praise of the Sacred: 43 Centuries of Spiritual Poetry by Women, and crafted dazzling translations in The Ink Dark Moon: Love Poems of Ono No Komachi and Izumi Shikibu. She is also the author of a recent book of essays, Nine Gates: Entering the Mind of Poetry, praised by the poet and fellow Zen-practitioner Gary Snyder as being “fearless” and full of “diamond-hard insights.” She is widely considered one of our country’s greatest living poets.

AS FOR THAT aforementioned notion–illustrated so clearly in the film–that artistic genius can be built by effort and determination alone, Hirshfield is still pondering the idea.

“Well, you know that saying ‘Ten percent inspiration and 90 percent perspiration,’ ” she says. “But what the movie is saying is that, without great ambition, no one will become a great artist.

“It’s certainly an idea that is supported by our culture,” I note.

“That’s the Western romantic image of the artist, that art is born of striving and torment,” Hirshfield replies. “And in Jackie’s case, as shown here, it was that torment of wishing to be seen–and wishing to be loved.

“If anything in the film troubles me,” she goes on, “it might be the implication that the one who chases art won’t be happy, and that the one who will be happy is the one who walks away from the realm of creativity. I think that’s a cultural stereotype, and it’s unfortunate. It’s the Sylvia Plath model, the ‘art-and-unhappiness’ connection.

Hirshfield pauses, absently running her hand along the table once again. After a moment, she describes the time she read all of Yeats’ poems, chronologically, from first to the last.

“I was quite delighted to see some very bad poems in there,” she admits. “It was nice to know that Yeats, too, could write badly. Because if Yeats can write badly, then I can write badly–and it doesn’t mean the end of everything. It merely means we all write badly.

“The trick,” she says, “is to sometimes write well.”