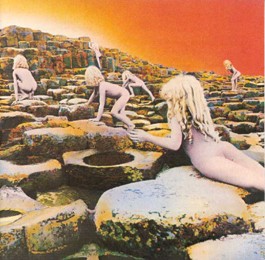 Broken up for 27 years, Led Zeppelin remain the world's greatest

Once the greatest, always the greatest? I felt this about the Ramones when I saw them on their 1996 Adios Amigos Tour, and again about the Rolling Stones when I caught their 1997 Bridges to Babylon tour. Now, it’s Led Zeppelin, but not due to any single kick-ass show. It’s the sheer snowballing weight of current Zeppelin quasi-events that makes them once again the Biggest Band on the Planet.

For starters, Nov. 13 saw the release of Mothership, a new two-disc set that’s the best Zeppelin best-of yet. But so what? Mothership has no new material, and these rock standards have been heard 85 billion times an hour for the last 500 years—or so. More newsworthy is the same day’s official release of the entire Zeppelin catalogue to digital markets. The availability on iTunes of The Complete Led Zeppelin, a 16-“disc” set that sells for $99.99, is notable for its legality and low price.

Why did Zeppelin hold out for so long, only to settle their digital rights for a mere $60 million, 10-year re-signing deal with publishing giant Warner/Chappell Music? That’s just $2 million a year for the three surviving band members. Surely, they make more annually on karaoke royalties. Zeppelin’s exclusive deal with the Verizon network for MP3 ringtones is also a yawn (I used “Black Dog” as my ringtone on an old Nokia for years, even if it did sound like Pac Man).

The biggest performance news is what the band aren’t doing. Reunion tour rumors roared when the band agreed to reunite in London for a Nov. 26 tribute concert to Atlantic Records maverick Ahmet Ertegun. But then guitarist Jimmy Page broke one of his little Satan-blessed fingers, delaying their one sure concert until Dec. 10. Vocalist Robert Plant insists there won’t be a tour, but everyone else, including Page, seems to think 2008 dates are possible. The site GoTickets.com is already promoting dates that don’t yet exist.

This accumulation of details starts to add up. We’ve heard small rumblings of Zep glory during the past year, from Page’s work with Jerry Lee Lewis on “Rock and Roll” on the Killer’s 2006 duets disc Last Man Standing, to Plant’s recent cameo on Goin’ Home: A Tribute to Fats Domino, to Ann Wilson of Heart de-sexing “Immigrant Song” on her new disc Hope & Glory. The clearest signpost of Zep’s 2007 greatness is Led Zeppelin: The Ride, a roller coaster designed with the band’s input that debuted this June at the Hard Rock Park in Myrtle Beach, S.C.

Legal downloads, concerts that aren’t happening and well-designed roller coasters are suddenly the foundation of revered longevity. But the deep layers of Zeppelin news really pay off with two recent discs, the White Stripes Icky Thump and the Robert Plant and Alison Krauss collaboration Raising Sand. Jack White’s alt duo is today’s hottest act, and he’s always worn his Zeppelin/Page influence on his sleeve, both as a producer and a guitarist. Icky Thump is dense, chaotic and open, making sure we get this well-documented connection.

Raising Sand is almost a country record. Krauss is a darling of both traditional bluegrass and alt-country crowds, and the disc features sweet material by Mel Tillis, Townes Van Zandt and the Everly Brothers. But the ethereal and solid edges belong to Plant, with the purest singing (i.e., non-banshee) vocals of his career.

Finally, the true indicator that Led Zeppelin are again the Kings of Rock is the release of the sure-fire blockbuster movie Beowulf this Friday. It’s the fifth film in the last decade to be based on the profound, enigmatic Anglo-Saxon epic myth. Why does this mean Led Zeppelin is currently great? Come on—if you’ve read this far, you know why.

This Zep news is all real, and they really are the Greatest Band of All Time.

Now 68, Coe could easily rest on his back catalogue of hits, which actually includes quite a few tender odes—Johnny Cash did a great version of “Would You Lay with Me (In a Field of Stone)”—but he’s still active, recently recording a country-metal collaboration with the Texas metal band Pantera, who have long been accused, as bad luck would have it, of also being closet racists. It’ll be interesting to see if Coe is ever inducted into the Country Music Hall of Fame, and if so, whether or not he’ll get the same sort of mixed reaction that faced director and House Un-American Activities Committee cooperator Elia Kazan when he took the podium in 1999 to accept a Lifetime Achievement Oscar.

Coe’s career magnifies the exact question that underlined Kazan’s big moment: What’s more important, the man or the artist? The hundreds of contributions to country music, or the one ugly stain? And how widely do we separate the two?

That is, of course, except for the Ramones and the Rolling Stones.