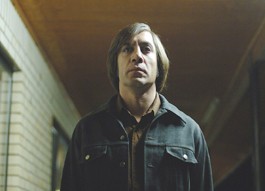 I would have thought that seven years of Texas metaphysics were enough for any country, whether it was filled with old men or not. But the new Joel and Ethan Coen film is already being heralded as a masterpiece and one of the best movies of the year. It certainly has punch, and if punch alone is what draws you to the cinema, it delivers.

In Texas, circa 1980, following a desert massacre, some killers and lawmen circle one another. All that’s left is a bundle of money, a group of bullet-ridden Mexican corpses and a truck full of contraband powder. A cagey Vietnam vet, Llewelyn Moss (Josh Brolin), out hunting antelope, discovers the mess, takes the money and leaves the drugs.

Then Moss puts himself on the criminals’ radar when he returns to the scene of the crime. He barely makes it out alive. Stalked by the worst of the drug runners, it would seem that his only hope of protection is rugged third-generation lawman Sheriff Tom Bell (Tommy Lee Jones), who is drawn into the case after a deputy is killed.

Trailing Moss is death itself: Javier Bardem, playing Anton Chigurh, a freakazoid with a black Prince Valiant haircut. He is a serial-killer-cum-professional-hit-man. “I gave my word,” he says, carrying out one murder just on the principle of the thing. That’s Texas metaphysics: you’re either for him or against him.

Chigurh is the proactive one in this movie, always going forward even as the other characters go into hiding, follow red herrings and turn up at the wrong places or too late. He displays superhuman abilities and a truly baroque murder weapon—he is a familiar figure from grindhouse cinema.

The human cattle who fall under his slaughterhouse killing machinery are grindhouse fodder: they’re peevish, old, obese or as trusting as village idiots. Chigurh is just culling the herd. Sometimes he gets cosmic on his victims in order to show them the transitory quality of their lives. It’s what Jigsaw does in the Saw movies—enlightenment through torture. If Chigurh uses psychological torture instead of a dungeon, he is still a torturer. The threat of death lies behind all torture. (An interrogator who says something like “I’m pulling out your fingernails, but then I’ll let you go” isn’t going to succeed in his career.)

Chigurh’s gambit appears less superficially ghastly: he allows some of his victims to flip a coin for their lives. True, his coin game with one aged gas station owner in the middle of nowhere is brutally suspenseful, almost as full of impact as the film’s finest moment, a brilliantly directed pit-bull attack on a riverbank.

The Coens approach Cormac McCarthy’s novel like kneeling penitents, crawling across Texas to follow his plot points. They are taken by Bell’s musings on the end of the old ways and how much weaker we are than those who came before us—and who wouldn’t be, when Tommy Lee Jones utters them. The Coens go flat and dry to heighten the tense set pieces; the movie is all motel blocks, vast skies scribbled with thin white clouds, tires soughing on roads instead of music.

It all leads to nada, to a postmodern finale, an action movie’s version of coitus interruptus. Like American Gangster and, to a lesser extent, 3:10 to Yuma, No Country for Old Men is a genre picture that has lost its faith in catharsis. Morose vagueness will get No Country for Old Men called a classic, instead of what it is: an often effective but pompous grindhouser. Its pretensions are so big, you couldn’t fit them in Texas.