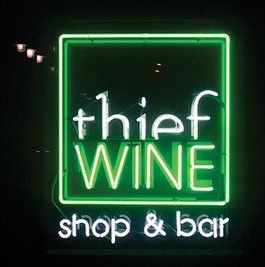 So accustomed are we in the North Bay to aisles bristling with hundreds of proud bottles from America’s premier wine-growing region that the Thief Wine Shop & Bar’s contrarian selection is almost shocking. Located in a bustling indoor market packed with cheese, fresh fish and bread, Thief shelves a sampler of sought-after local wines—Rochioli, Merry Edwards, Gary Farrell—but a much greater number from Spain, France, New Zealand, South Africa—even far-flung Oregon. So what’s their deal? Their deal is, they’re in Milwaukee, Wis. In lieu of the usual tasting-room tip, this week Swirl can offer this: A considerable savings may be gained in red-eying it to MKE instead of ORD (equivalent to a few bottles of top-notch Pinot, or more soberly, a day of unpaid vacation). With its broad, lightly populated streets and examples of German Imperial-style architecture, Milwaukee looks a little like Berlin in places—and like it suffered heavier bombing in others. Hemmed in between elevated freeways and the river in a revitalized historic district, the Milwaukee Public Market is that burg’s equivalent of Napa’s Oxbow.

Thief co-owner Phil Bilodeau, who as former communications director for Sonoma County Vintners should know a thing or two about America’s Premier Wine Region, explains that it’s typical for a region’s product to headline at home. Out here, there’s a whole world to choose from. A glass of Doña Paula Los Cardos Malbec rosé ($5.50) is a brilliant pink everlasting gobstopper of unreal, candied cherry flavor, and nearly made me forget about “Miller Time.” (The best tour and tasting in Milwaukee concludes with a visit from a holographic Frederick Miller himself, and of course, free beer in a concrete “beer garden.” I recommend the crisp satisfaction of Miller Light over the original recipe.)

What about America’s own heritage grape? In a liquor and wine shop in Chicago’s gentrified Andersonville district, it’s found under the sign, “Red Zinfandel.” I ask the clerk whether such a distinction is mandatory in these parts, but he doesn’t understand what I’m getting at. Any North Bay wines in the upscale Pastoral, which promises artisan cheese and wine in the heart of the Loop? Kudos to Healdsburg’s Banyan Wines, and Martin Ray’s second label Angeline. But that’s all.

Yes, the take-home lesson might be banal: Our fermented grape may be as fine, diverse and so very special as we would like to think, but when it comes to the rest of the America, there are plenty of other bottles in the sea. So that leaves more for us, and that’s damned good luck for us. From the redwood forest to the Napa Carneros, these wines were made for you and me.