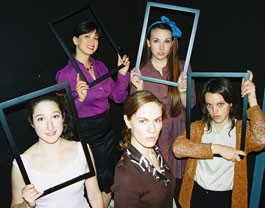 Caryl Churchill is arguably one of the greatest modern English playwrights, and for audiences unfamiliar with the groundbreaking feminist writer, not one but two of her better-known plays are currently running in Marin County. Ross Valley Players just opened Top Girls (above), Churchill’s 1982 fantasia on workplace women’s right issues. Directed by Cris Cassell, this potentially puzzling play gets a crisp, comedic staging that highlights Churchill’s playful pushing-on-the-bruises exploration of important issues.

Though some of the smaller performances are weak, the overall production is fine, offering twice as much grist for thought as most other plays. Then again, presenting challenging theater is what Churchill does.

Take, for example, her 1972 comedy Owners, running through May 30 in a makeshift storefront space in San Rafael. Produced by Marin’s fearless AlterTheater Ensemble and directed by Elizabeth Williamson, the show follows a stunning, escalating series of encounters between an obsessive property owner and the renters she is attempting to evict. Her goal is not commerce; she once had an affair with the man of the house, and she hopes to blackmail him into resuming their relationship. The resulting antics—involving arson, adultery and forced adoption—are aggressively unpleasant, and yet strangely riveting. The cast is excellent, and the clever use of the storefront’s cavernous space lends atmosphere to the “real estate” vibe of the show.

The star, of course, is Churchill. With both of these productions, this testy, tenacious writer demonstrates the intellect and creativity that has always made her work so fascinating, challenging and important.