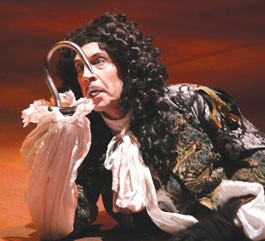 There has been a great deal of buzz about the big multimedia Peter Pan winging its way into San Francisco’s Threesixty Theatre from its successful London run. Anticipation for the high-tech extravaganza has been so high, in fact, that it caused the producers of Marin County’s Mountain Play to scrap their own plans to stage Peter Pan this summer amid worries that, if it came down to choosing one Peter over another, North Bay families would choose the fancy eye-candy with the dazzling high-fly effects. This was probably a good call.

The question, of course, is whether or not Peter Pan is equal to all of its hype—and the high ticket price. As an “event,” something akin to a few hours at a marine park or a day at the circus, a professional baseball game or a fireworks display, this Peter Pan certainly delivers its share of oohs and aahs. As theater, however, the show is a severely hit-and-miss affair.

The script adaptation by Tanya Ronder blends J. M. Barrie’s original nonmusical stage play with bits and bobs lifted from Barrie’s much better novel, retaining many of the author’s edgier observations, stuff that is scrubbed from most family-friendly productions. That said, the script’s sharpness ebbs and flows drastically. One moment, where the Indian princess thanks Peter for saving her by performing a sexy lap dance, is nothing short of bizarre.

Overall, the play is well acted but badly paced and sloppily directed by Ben Harrison. Brilliant flashes of art direction are mixed with stunningly unconvincing projected animations. After all, those animated surroundings, projected all around the audience using the theater’s fancy 360-degree technology, is the current catnip.

The flying scenes are lovely, with the landscape of London and the nightscape of the heavens whooshing past as the children appear to swoop under bridges and over housetops. But after that, the producers can’t think of very much to do with their bag of tricks. A second act scene involving a pair of children swimming through the lagoon among animated fishes and sub-par Cirque du Soleil mermaids is pretty but mainly just slows down the story.

Mostly, the projections serve to throw scenery up around the tent—bedroom walls, Neverland trees, the bow and stern of a pirate ship—but the effect is more clumsy than inspired. And once the adrenaline rush of that initial night flight is over, it’s hard not to notice that the animation is chillingly fake and cold, closely resembling that of the video game Myst. While children will likely be utterly transported by the show, the adults who shelled out the bucks might feel that there is a bit of bait-and-switch going on.

Ultimately, the best parts of the show have nothing to do with the techno-wizardry. Itxaso Moreno’s punkish Tinkerbell is delightfully bizarre. The famous ticking crocodile—a massive two-person puppet driven by low-riding bicycles—is incredibly satisfying, with teeth made of clothespins and a roar that shakes the seats. And as Captain Hook, British actor Jonathan Hyde (Titanic, Jumanji, Ananconda) is everything a Hook should be, until the otherwise sharp-witted script fails him, giving him one of the lamest exit lines ever forced upon kid lit’s most imposing and attractive villain.

In the end, one’s satisfaction with Peter Pan will depend largely on what one expects. Based on its marketing campaign, I expected a dazzling night of state-of-the-art theater. What I got was an above-average county-fair attraction.