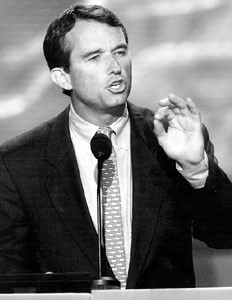 Healthy food promotes clean water; clean water promotes healthy food. This reciprocal relationship is about to get codified, as a leading environmental group and a leading organic farm cooperative join hands. On June 8, Robert F. Kennedy Jr., president of Waterkeeper Alliance, will announce the organization’s new partnership with Organic Valley, North America’s largest cooperative of organic farmers, during his talk at the Health and Harmony Festival in Santa Rosa.

“The Waterkeeper Alliance and Organic Valley partnership is designed to highlight the crucial link between pure farms and pure waters,” Kennedy said, commenting on the first formal partnership the organization has entered into since its creation in 1966. Details of the partnership will be released at a press conference prior to the speech. “All organic farmers should be recognized for the contribution they make to protecting our environment,” Kennedy added during a recent phone interview from his New York office. “Our partnership with Organic Valley will help to expand the market for all sustainable farmers.”

Waterkeeper Alliance is best described as an environmental “neighborhood watch” program. Its philosophy holds that the protection and enjoyment of a community’s natural resources require the daily vigilance of its citizens. Community members keep an eye out for polluters in their local waterways with one person designated as the riverkeeper for that area. Equipped with some type of boat, hip boots, vials for water tests, and a working knowledge of environmental law, the riverkeeper patrols neighborhood waterways. The local groups can turn to the umbrella organization for legal help in suing violators.

There are currently 87 international organizations in Waterkeeper Alliance, mostly in North America and several in Central America. Local groups include the Petaluma Riverkeeper, the Russian Riverkeeper, and the Tomales Baykeeper.

The alliance’s main concern is to protect waterways, and in order to do that, the organization has turned to promoting organic farming as well, said Jeffrey Odefey, staff attorney for Waterkeeper Alliance. “Many of our riverkeepers, especially those in South Carolina, kept finding large amounts of pollutants in the water due to nearby agricultural industries, mostly hog farms,” Odefey explained. These industrial hog factories have become one of the country’s biggest environmental hazards, he added.

Thousands of hogs are squeezed into tiny pens in giant warehouses. In order to prevent epidemic levels of disease amid such overcrowding, the hogs are fed antibiotics in addition to growth hormones. According to statistics disseminated by the alliance, up to 80 percent of antibiotics administered to hogs pass unchanged through the animal.

The waste from these hogs is then flushed into open-air pits. Animal waste is rich in phosphorus and nitrogen and can be used as fertilizer when applied in appropriate amounts. But the thick brew of feces and urine in the pits is too concentrated to be effectively used as fertilizer by most crops, so the untreated waste simply runs directly into public waterways, carrying with it the antibiotics and the high levels of nitrates.

Once antibiotics enter waterways, they spread through the environment in low concentrations, killing susceptible bacteria and leaving resistant survivors to multiply. Those bacteria can then infect people who swim in lakes and rivers or drink well water. Diseases that were once easy to treat with routine antibiotics are becoming difficult to cure.

What caught the attention of the riverkeepers in the Carolinas were the millions of fish in North Carolina that were dying because their skin was dissolving. It turns out that nutrient-rich waters spawn outbreaks of Pfiesteria piscicida, a microscopic predator that secretes toxins fatal to fish. Waterkeeper Alliance representatives believe that these same toxins cause fishermen, swimmers, and others to suffer respiratory distress, mental impairment, and body sores.

In hopes of cleaning up their waters, the riverkeepers turned to organic farmers to form symbiotic relationships. For example, Waterkeeper Alliance has trumpeted the work of farms–such as Marin County-based Niman Ranch–that do not use antibiotics or growth hormones. Additionally, in these small farms, the animals are able to engage in natural behaviors such as roaming the land, building nests, and socializing.

And now the alliance is forming a partnership with Organic Valley, the only national organic brand owned and operated by farmers. It was organized 15 years ago by a half-dozen family farmers who believed in sustainable agricultural. Now it’s made up of 450 farmers throughout the United States.

George Siemon, founder and CEO of Organic Valley, will speak at the upcoming festival along with Kennedy.

“We are pleased and honored to have been invited to participate in this year’s Health and Harmony Festival,” Kennedy said. “The success of the festival over the years makes it an ideal place to launch our partnership with Organic Valley. Knowing that many of the people who attend the festival are committed to protecting the environment makes it even more special for us.”

The event, consistently voted the best area festival by Bohemian readers, is now in its 24th year. Celebrating all that is good, healthy, and harmonious in life, the festival has a long-standing relationship with Organic Valley. “Bobby Kennedy doesn’t usually speak at venues such as festivals, but Organic Valley really went to bat for us to bring him here,” said Jeanne Friedland, one of the festival organizers.