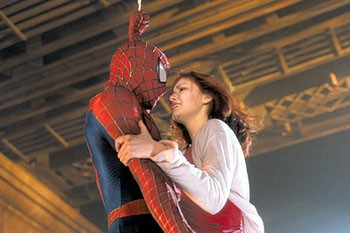 Arachnid Love: He’s more sexy than the Fly, more svelte than the Hulk.

The ‘real’ Spider-Man has his say

It’s late afternoon in Baltimore on the opening day of Spider-Man, and Dan Poole’s cell phone won’t stop ringing. Across the country, armies of thrill-seeking matinee-goers have already spent millions to catch the long-anticipated movie version of the classic Marvel comic book. Right now, thousands of internet junkies are hotly debating the movie’s controversial organic web shooters (in the original comic book, Spider-Man shoots webs from mechanical gizmos he invents himself). Poole himself caught the first Baltimore screening of the day, and now, not long after, his friends and fans are calling up to get his reaction to the movie.

But they’ll have to wait, because Dan Poole–the guerrilla filmmaker and comic-book fan commonly known as the “real Spider-Man”–is tied up, energetically describing that response to me.

And here it is: Spider-Man, the movie–directed by Sam Raimi and starring Tobey Maguire, Willem Dafoe, and Kirsten Dunst–very nearly drove Poole up a wall.

Literally. Of course, Poole is a guy who has actually climbed walls.

“It was very hard to sit still through,” he admits with a laugh. “It did make me want to climb something or swing from something. But I just sat there, wanting so badly to have been in it!”

That desire–to be in a Spider-Man movie–is what inspired Poole 10 years ago to shoot his own stunt-filled, crudely shot Spidey adventure, The Green Goblin’s Last Stand. Poole’s movie–in which he dons a Spider-Man suit to scale real buildings and dangle from incredibly high bridges–has made him a legend among independent filmmakers. Now, a self-made documentary about Poole’s exploits, titled The Real Spider-Man: The Making of ‘The Green Goblin’s Last Stand,’ has become a certified film-festival phenomenon, snagging two awards during January’s edgy No-Dance Film Festival in Park City, Utah.

“Well, climbing walls is a lot of fun,” he says. “I gotta tell you, though, that climbing in that costume is not easy. The mask is a bit suffocating and your eyes tend to get fogged up. But swinging–swinging from bridges, swinging from building to building–that’s when I really feel like Spider-Man. In this new movie, whenever Tobey Maguire is swinging, climbing, or jumping, it just made me feel so . . . envious. I could identify with those moments.”

“Damn! I loved it!” he confesses at considerable volume. “Ain’t nobody going to be saying too much bad shit about this one. It’s good. I give it an A minus.

“I have some reservations,” Poole continues. “I hated the Green Goblin’s mask. Willem Dafoe’s face is scary enough without a mask. And of course there’s never going to be any excuse for the organic web shooters. No excuse.”

“Hey, if I were bitten by a genetically engineered spider and mutated into a half-spider, half-man, I’d want organic web shooters,” I reply.

“OK. Look,” Poole replies, “when you read a couple titles a month of a particular character like I have, you absorb the parameters of the character and you expect others to be faithful to those parameters. His name is Peter Parker. His superhero name is Spider-Man. He builds his own mechanical web shooters. He never shoots web fluid out of his wrists or his ass or his nose or anything. You gotta do it the way it’s written. It’s history. Sure, it’s pop-culture history, but it has touched millions of people and you simply don’t mess with it. Otherwise, why not call him Bruce Parker? Why not call him Spider-Guy?

“Anyway,” he goes on, “other than those quibbles with the movie, you can’t deny how well Sam Raimi treated the material. You can’t deny that Raimi is a fan.”

I ask Poole to explain what it is about Spider-Man that makes people so passionate.

“Other superheroes–Batman, Superman, guys like that–are always sexy and alluring,” Poole explains. “They can almost do no wrong–the Hulk being one exception, I should add. But Peter Parker, aka Spider-Man, is a character that people identify with because he is so real. He’s got problems. Peter Parker is not somebody people feel like they want to be. Peter Parker is somebody we feel like we are.