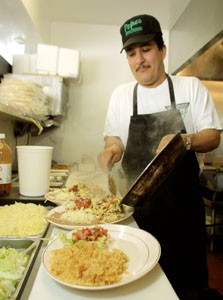 Pepe’s says so, and they just might be right

I’m from Ohio, where there are no taquerias. There are Mexican restaurants, usually decked out in velvet sombreros and airbrushed murals, with a wait staff of local college kids who serve indistinguishable entrées that get washed down with giant pitchers of Slurpee-like margaritas.

No wonderful carnitas, no savory al pastor, no tender lengua, and no way will you find cabeza or sesos. Menudo is the teen band Ricky Martin used to be in, not tripe soup. Mole is a thing you go to the dermatologist to get removed.

When I moved out to California, it was a revelation to discover that the Mexican food here is actually Mexican. To novices, the sheer volume of taquerias in most California towns can be dizzying, and neighborly advice is often the best place to start. My boyfriend, who had graduated from Sonoma State, raved about one taqueria in Rohnert Park that he claimed was the best he knew. I went there and was sadly unimpressed. I came to prefer a joint closer to home, on Mendocino Avenue. When I lived in Sonoma, my favorite place was on Arnold Drive, a mere few minutes’ walk from my apartment.

That’s when it struck me: the criteria for best taqueria may have as much to do with where the taqueria is in relation to your house as it does with overall quality. Rolling a block home–the comalike effects of a burrito setting in–is far preferable to (and probably safer than) stepping into a car.

In Ohio, the closest thing to a taqueria in the whole state was La Bamba’s in Columbus, where you could buy a “burrito as big as your head.” California burritos are always as big as your head. The point is, in Ohio you had to go out of your way to get good Mexican food; here, you often just have to cross the street.

Pepe’s Mexican Restaurant in Santa Rosa has just added a Fourth Street location to their original joint on Sebastopol Road, and I’ve found that they have a more legitimate claim to the best taqueria in town: the food is standout taqueria fare. Their sign boasts the “best burritos in town,” and I felt this needed testing.

Pepe’s new location is in what was once Quinley’s Drive-In, a place replete with chrome styling, black-and-white tile floors, and red vinyl booths that scream out “diner!” Instead of tearing out the Mel’s look, Pepe’s simply strung festive banners and stuck a few standard cheesy Mexican knickknacks up on the bright, white walls. It’s a bit disarming to step in there and see the classic American diner counter with its stools stretching out before you under the fluorescent lights. But it’s a fun juxtaposition.

Burritos come in regular and super sizes, the difference being that super has additions of guacamole, lettuce, cheese, and sour cream. A minimalist, I opted for a regular burrito al pastor (spicy barbecue pork–what burritos were made for!). The pork was superb, richly seasoned, not gristly, and it had just enough grease to be moist and appetizing without being greasy.

The ratio of meat to beans and rice in the filling leaned way to the side of meat, another plus–no one wants to dig into a rice burrito. (Pepe’s does offer a veggie burrito, which is slightly misleading as it contains no additional veggies, save salsa, lettuce, and guacamole; it’s essentially a regular burrito with no meat and more rice for the same price.) As pleased as I was with the seasoning of the al pastor, I promptly dumped both types of house-made taco sauce (surprisingly mild) all over it and dug in.

Next visit I tried a torta. I’m surprised these joyful bundles of gluttony are not more popular. A torta is kind of like a burrito rearranged in sandwich form on a soft white roll. I ordered the grilled steak torta, which at $6.50 was kinda spendy, but the generous amount of steak spilling off the bun served as redemption. Also plopped on my torta was shaved lettuce, slices of avocado and tomato, and pickled jalapeño. Sadly, the steak was a bit bland, and though I doctored it up just fine with salt and taco sauce, I felt let down (al pastor tortas are the way to go). A tasty, sloppy, filling dinner, overall.

Pepe’s offers dinner plates as well as à la carte options. I tried a combination with one chile relleno and one tamale, thinking it would be a reasonable amount of food. I think I am still full. For $9.95, you get a platter laden with copious piles of rice, beans, salsa, guacamole, and sour cream. The chile relleno, its delicate batter smothered under a mild tomato sauce, oozed with a gooey, barely tangy cheese filling. The whole affair was a treat, but so very rich that it was tough to finish (such is the nature of a good chile relleno). The chicken tamale was good, but the chile relleno’s filling gushed all over it bloblike, and after that, discerning separate flavors and textures was a lost cause.

In true diner fashion, Pepe’s is open all day, breakfast to dinner. A breakfast burrito is $6.95, more than either a regular or a super burrito, but still cheaper than an omelette in most local breakfast places. I ordered a chorizo burrito one morning (sausage in keeping with the breakfast theme) and found myself face-to-face with a bulky burrito of earthshattering proportions. Inside were tiny bits of egg, a small handful of rice, some beans, a scattering of melted cheese, and about one pig’s worth of chorizo. The only way I could have burned off the caloric count of the breakfast burrito would have been to scale Mt. Shasta or build myself an impromptu log cabin. I ate the burrito (well, most of it) at nine in the morning and did not feel stirrings of hunger until seven that night.

For a taqueria, the prices at Pepe’s seem a little high–until you actually get your food and realize how much of it there is. As you may have gathered, they don’t skimp on the meat. Those of you into the takeout thing can easily squeeze two meals out of one dinner. Tacos, at $1.95 each, are on the cheap side, but if you want more elaborate fare, you’re going to have to pay for it. And salsa fresca is 60 cents for a side!

Pepe’s new Fourth Street location seems to be doing pretty brisk business so far, and it has more than a few nearby taquerias downtown to contend with. Pepe’s, however, unlike its local competitors, has lengua, sesos, cabeza, and all that good stuff (real taquerias offer offal), plus breakfast, plus big, roomy booths, plus parking. And they sell beer. So even though Pepe’s is not as close to my house as a few other taquerias are, I am happy to overlook this technicality and proclaim it my new favorite taqueria.