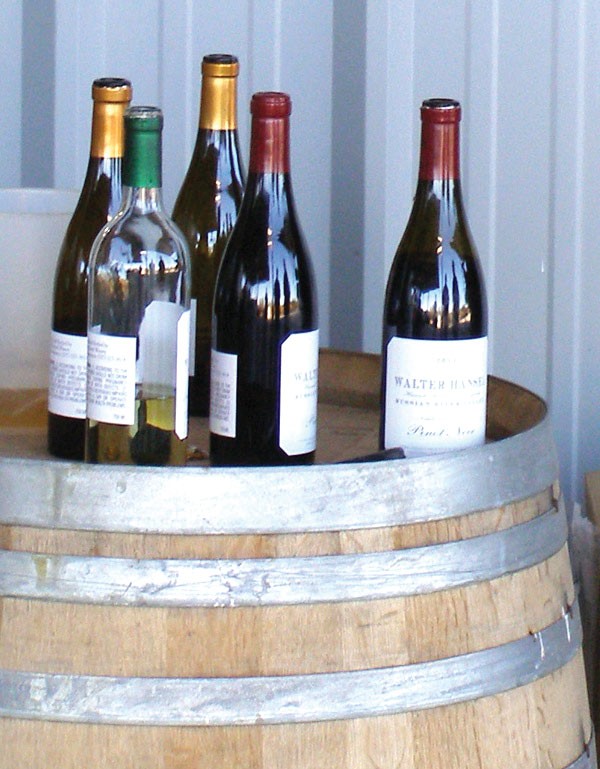 In the Russian River Valley as in Burgundy, there’s a difference between a north slope and a south slope. And there’s a difference between a long a and a short a. For several years I wondered, what is this Walter Hansel, quietly growing Pinot Noir and Chardonnay just west of Santa Rosa? Turns out, I’d been thinking of a Germanic pronunciation: “HAHN-zel.” Instead, as commonly spoken in these parts, it’s a red-blooded short a (as in Lina Lamont’s Singin’ in the Rain plaint “I keeeian’t steeeiand it!”). Oh—Hansel, as in the folks who have been selling cars to Sonoma County residents since 1961!

Proprietor Stephen Hansel grew up across the road from this plain, utilitarian winery, where he meets a group of visitors gathered around an upturned wine barrel on a weekday morning. Some only know about his Parker scores, and this is their first trip east of Napa. Hansel explains that after the wine turned out particularly good when Tom Rochioli farmed the family’s just-for-kicks half acre one year, they asked, “What did you do different?” Thus began Hansel’s education in the finer points of grape farming, which he explains in a way that makes you feel you’re getting straight talk, no slick salesmanship. If Hansel said the Chardonnay tastes better with a clear coat option, you might just go for it.

But first, the test drive. The 2011 Cahill Lane Chardonnay ($39) is characterized by concession-stand popcorn, while the 2011 Cuvée Alyce Chardonnay ($39), named for Hansel’s mother (“She was over the top, she drank whisky, she didn’t drink wine”) sizzles with lemon-drizzled apples.

The Pinot is where it really winds up. The 2011 Cahill Lane Pinot Noir ($39) is a pretty little spicy root beer and cherry cola number; the 2011 Cuvée Alyce Pinot Noir ($39) darkly perfumed with cranberry-black cherry, finishes silky-strawberry, with lingering tension on the tongue. And then Hansel thieves some 2012 samples out of barrel. The unusually fair price point—given all the Parker name dropping—will be held as long as practicable.

The plain talk at the barrel-top tasting, however, is no longer the whole story, now that Hansel’s opened the doors to Walter Hansel Wine & Bistro in the former Zazu location. Here you can wash down oysters cold and warm, cheese plates or Liberty Ducks rillettes with house and other local wines, as well as red and white Burgundy—Hansel doesn’t draw the line at driving a Ford or pushing a Chambolle-Musigny. He’ll sell you both.