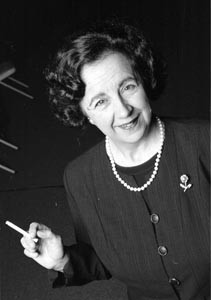 View to a Kill

IT’S BREAKING one of the last taboos left in our youth- obsessed culture to admit it, but everybody has to face the fact eventually. Sooner or later, death catches up with us all–ready or not.

Of course, most people fall into the “not” category, as demonstrated by the three characters in Jeffrey Hatcher’s Three Viewings, now at the Dreamweavers Theatre in Napa.

The three–a lovesick funeral director, a strutting thief, and a naive housewife–don’t face the end of their own lives. Instead, it’s the profound impact death has upon the living that lies at the heart of this play.

If this all sounds like a total downer, you’re in for a bit of a surprise. It’s not just that Three Viewings has the courage to broach the difficult subject of death. Hatcher’s witty play–divided into three monologues, all set in the same Midwestern funeral parlor–is also unafraid to look the Reaper in the eye and laugh in his bony face.

And the audience was certainly chuckling right along on the opening weekend. It’s no easy task for one actor to carry a third of a play on his or her own. But under the capable direction of Debbie Baumann, the cast managed–with a few minor stumbles–to mine both the rich humor and the deep pathos present in Hatcher’s work.

Joe Lewis brings a commanding presence to the stage in the role of Emil, a funeral director hopelessly in love with a woman who attends all his funerals for business reasons. Torn between prudence and desire, Emil experiences every casual touch from his beloved as a “detonation to the skin.” He longs to confess his love, but he fears “a howl of derision and 20 years of averted glances.” The humorous side of Emil’s predicament comes through loud and clear in Lewis’ hilarious performance. But the actor manages the transition to tragedy too lightly: his reaction to devastating news is so understated that it strains belief.

Victoria Field does a commendable job in the demanding role of Mac, a demented but sexy woman who earns “a high five figures” by going to funerals so she can steal jewelry off the corpses. Packing more venom than your average cobra, Mac slithers through her monologue, spitting out insults and wisecracks about the absurd ways our society deals with death.

Drawn back home (where she’s known as “the bipolar, bisexual drug addict”) by the death of a wealthy relative, Mac confronts her past–which reveals her to be far more complicated than appearances suggest.

But the shining star of this cast is unquestionably Gwennyth Trice, who finishes off the play in the uproariously funny role of Virginia, a naive housewife whose husband’s death reveals that the couple’s finances were built on debtor’s quicksand.

Every time she checks her answering machine, she gets another ugly surprise. It turns out she now owes big money to the bank, to her brother-in-law, and–ominously–to the mob-run Smith Trucking (“They own no trucks,” Virginia explains, “and there has never been a Mr. Smith”), which loaned her husband half a million at 50 percent. “I am not a financier,” she remarks, “but even I know this is not a good rate.”

Trice’s nearly note-perfect performance provides a suitable ending to this play, which offers more laughs than most comedies–and yet manages to send an audience out of the theater with plenty to think about.