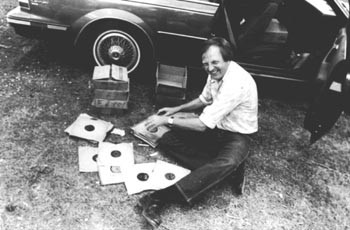 The recently released five-CD box set Arhoolie Records 40th Anniversary Collection: 1960-2000, The Journey of Chris Strachwitz maps out that legacy in what Strachwitz himself calls “raw, rootsy, and unpolished” fashion.

As the founder of Arhoolie Records and proprietor of Down Home Music in El Cerrito, Strachwitz is a familiar figure to Bay Area roots music enthusiasts. But he also is one of the most important influences in modern American music in the same league with musicologist and archivist Alan Lomax and documentary filmmaker Robert Mugge. As writer Elijah Wald underscores in the liner notes, Strachwitz is largely responsible for the regional revivals of Cajun and zydeco music, spreading the word about and helping to gain international recognition for Clifton Chenier, BeauSoleil, the Savoy-Doucet Band, and other giants of Louisiana music. In the same vein, Strachwitz spurred wider interest in Tex-Mex music by recording accordionist Flaco Jimenez and other purveyors of border music. His recordings of blues guitar greats Mance Lipscomb and Lightin’ Hopkins still are revered in blues circles.

Most recently, Strachwitz has issued a series of critically acclaimed steel-guitar gospel CDs.

A POLISH immigrant–his family fled the advancing Russian Army after World War II–Strachwitz grew up on a small farm outside of Reno, Nev., where he was quickly drawn to the hillbilly music beaming from radio station XERB in Baja California. A skinny kid with bad English and few friends, Strachwitz turned to music for solace. “I was longing for something that spoke to me,” he has recalled, “and I was listening to the radio and heard this amazing stuff.”

In 1960, Strachwitz was working as a German teacher at Los Gatos High School when he released the first Arhoolie album–a collection of songs performed by bluesman Lipscomb, a Texas sharecropper. The first pressing of 250 albums was stuffed inside of cardboard jackets and assembled on the kitchen table of Strachwitz’s home. The Arhoolie name was suggested by Texas folklorist, historian, and playwright Mack McCormick, supposedly referring to a style of field holler sung by black farmworkers. Soon Strachwitz–a “manic” collector of records–had transformed a simple love of blues and jazz into a legacy of American vernacular music.

Over the years, he has largely ignored commercial trends, compiling “audio snapshots” of what was rapidly becoming an outsider’s music in an increasingly homogenized society.

The result is a peerless scrapbook of roots music.