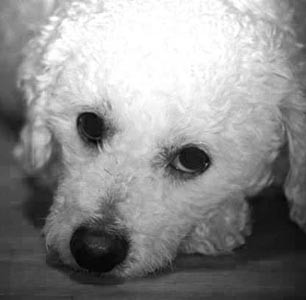 IT’S NOT EXACTLY Bosnia, but I live in the middle of a war zone. In my neighborhood, windows are flung open at 3 a.m. and anguished voices can be heard screaming, “Stop that damn barking!” In dog language this must mean, “Yes, do add your vigorous voice to the nighttime chorus that is so pleasing to the sleeping humans.”

It used to be that when people bought a home in the country, real estate agents would leave a celebratory bottle of champagne in the frig. Now I think they must chain several large and vociferous canines in the backyard.

Dogs out here are like sex lives. Even the most unlikely people have one.

Down the road, two of my neighbors–formerly friendly–are now warring over their pets. Threats have been hurled and allusions to guns have been made. Curiously, both have throngs of yap-happy canines. You’d think having so much in common would bring them together.

Another neighbor, when confronted with noise complaints, responds in three ways: (1) She denies that her dogs bark; (2) she states they bark to protect her property; and (3) she informs other neighbors that the complainant has pepper-sprayed her dogs. She obviously believes that the best defense is a strong offense.

The good news is that there’s an easy solution to this problem. And no, it doesn’t involve any pie-in-the-sky strategy like requiring pet owners to act responsibly.

My solution: we can all have as many dogs as we want, but we’d be limited to one breed–Boston terriers.

Scooter, my Boston, doesn’t bark. Oh, he may give out with a feeble yelp when the doorbell rings. And he may voice his objections if a cat dares to jump on a car he’s occupying. But other than those provocations, he’s as silent as a goldfish.

Boston terriers are intelligent, ecological (they eat less than big dogs), loyal, and cute. They’re also 100 percent all-American, being the only breed that originated in the United States. They do have a shortish intestine, so you may want to open a window when confined with your Boston to a small room.

But that’s a small price to pay for all that peace and quiet.