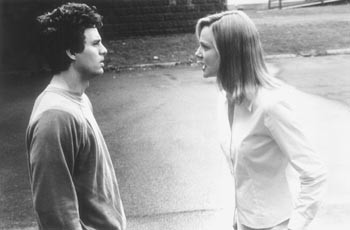 ‘You Can Count on Me’

‘You Can Count on Me’ earns its intimate warmth

ON THE SURFACE, You Can Count on Me is the typical dreaded Sundance movie, about family togetherness in a small town in upstate New York. Even the cellos on the soundtrack foretell a movie chock-full of hugging. It’s only when the film starts to unfold that you see differently.

The pleasant-looking small town here has its plain, dull side, and there’s congested Sunday traffic on weekends; the long memories of the villagers have a way of keeping the locals from getting over the past. Sammy, the heroine (Laura Linney, who was Jim Carrey’s deceptively sugary wife in The Truman Show) doesn’t mesh in sit-com timing with her shy, chubby fatherless son Rudy (Rory Cullen, Macaulay’s brother). Like real mothers and sons, they talk at slightly cross-purposes.

And Sammy’s job isn’t livened up by a lot of colorful characters. Do you know how it is in small-town movies, that the characters work at the bank? Sammy works at a bank.

As a regular churchgoer, Sammy values her uneventful life, but she’s about to get a shake-up from the arrival of her only other living relative besides Rudy, her drifting brother Terry (Mark Ruffalo). The friction between them is increased by her problems at the office with her new boss, a petty, inept martinet beautifully played by Matthew Broderick. His Brian is the sort of twerp who sends pink notes reading “See me ASAP!!!” to address the problem of an employee being five minutes late for work.

You Can Count on Me is especially a small delight in that no one here gets the last word. The four main characters recognize flaws in each other, but the flaws are left intact. It’s only in the movies that a snap diagnosis fixes a wobbly person and makes him/her sturdy instantly.

Jon Tenney plays Sammy’s pastor, a white mouse of a man who, sadly, insists on calling himself “Pastor Bob.” The reverend expresses himself awkwardly. Yet this Pastor Bob has something important to say about the kind of loneliness Terry faces. (And, naturally, Terry rejects the pastor outright–he may not have heard a word, but we have.)

When Sammy ends up closer to Brian than she could have predicted, the liaison makes no logical and yet perfect emotional sense; it’s Sammy’s reckless youth returning to her, even though she had almost completely sealed herself into middle age. Seeing the first scenes of Ruffalo, I was uneasy. I thought, this is an actor who tears the holes in his own T-shirt to make himself look haggard. Later on, I realized that Terry’s mask of toughness looks ill-fitting not because of Ruffalo’s acting, but because Terry himself isn’t as tough as he seems.

In a weak moment, director writer Kenneth Lonergan wrote the screenplay to The Adventures of Rocky and Bullwinkle, a film that may not have worked because the man wasn’t slick enough. Here he’s luckier. You Can Count on Me is mature, lovable, and touching work. This intimate film earns its warm, sentimental ending; the moments of awkwardness only increase the film’s common sense and charm.