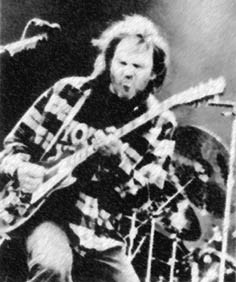 WHEN NEW YORK writer Jimmy McDonough interviewed Neil Young for the 1989 Village Voice feature “Too Far Gone: Fucking Up with Neil Young,” McDonough had no idea what his subject had in store for him.

In an auspicious moment of candor, Young announced, “The farther you go into this abyss called ‘obsession,’ the more dangerous it becomes. It’s like a drug. You can completely lose touch with your family, the people who count on you, people who would do anything to help you.”

Young was so impressed with McDonough’s resulting article that he asked the journalist to pen liner notes for a forthcoming 25th-anniversary CD anthology. That project was so successful that Young invited McDonough to serve as his authorized biographer.

At that point in his career, McDonough was one of the best music writers in the nation. Almost single-handedly responsible for reintroducing the public to presumed-dead R&B-jazz balladeer Jimmy Scott via his groundbreaking Voice cover story, McDonough characteristically used the money from the story to pay for a Scott demo session; not long after, the singer had a Warner Bros. contract and a chart-topping album.

McDonough’s writing is tough, probing, full of street-hustler style, yet hits with a cerebral impact. He was ready for a challenge, and Young magnanimously offered him a free hand with the biography, typical of the singer’s renowned image as an unfettered, purely creative force. Young consented to sit for five consecutive days of interviews and would have no approval over McDonough’s work, save for passages dealing with specific members of his immediate family.

With this assurance, McDonough committed himself to “devote his exclusive services and full time” to the book, and a lucrative deal was struck with Random House in August 1991. The contract was a $350,000 deal; the initial advance topped $100,000, with $85,000 going to McDonough and $20,000 to Young. McDonough relocated to the West Coast in 1991 to begin research, which is when I first met him. Although Jimmy left California in 1993, as a fellow biographer, fan, and pal, I watched his blunt style and relentless technique with no small fascination.

“Jimmy’s a wild man, and he obsessed on [the book],” says attorney George Hedges, who helped finalize McDonough’s initial agreement with Young.

After years of painstaking work and exhaustive research fleshed out by no less than 300 interviews–and supported by a loan of some $50,000 from Young–McDonough produced Shaky: The Authorized Biography of Neil Young, personally handing the nearly 800-page manuscript over to a seemingly pleased Young in 1998.

“The day Jimmy delivered the manuscript to Neil,” Hedges says, “he called me and said, ‘I feel good about it, it’s really gonna happen. I feel so relieved.’ ”

Random House, too, was eager to publish, but soon found that matters would not go exactly as planned.

In December of the same year, Young’s representatives, without explanation, abruptly announced that he would block publication. No one saw it coming. Random House spent the next year trying to reconcile subject and manuscript, but eventually chose to capitulate, citing in an April letter to McDonough both Young’s “sabotage” and the fact that the biography was contracted as an authorized–not unauthorized–project. Then the publishing house asked for the return of the nearly $200,000 it had by then already paid McDonough and Young.

On May 1 of this year, McDonough’s attorneys filed a $1.8 million suit against Young, seeking publication of the book and charging the rock star with, among other things, fraud and breach of contract.

The suit McDonough vs. Young, filed in Los Angeles County Superior Court, alleges that over a period of several years, “McDonough devoted himself to writing the biography. While doing so, he was repeatedly assured by Young that the musician would abide by his agreements with McDonough, and that McDonough should trust that Young would allow the biography to be published. Young repeated these assurances to McDonough . . . even on the day the manuscript was delivered to Young.

“In December 1998, however, Young revealed himself to be a contradiction in terms, using the wealth and power he had accumulated from his musical and business success to squelch publication of the Biography. Unilaterally and without contacting McDonough, Young, through his handlers, repudiated his agreements with McDonough and with Random House Inc. . . . without ever stating a single specific objection to any material in the Biography. But for Young’s actions, Random House Inc. would have published the Biography.”

THOROUGHLY weird stuff, but from the start, the entire project was unusual. Young not only insisted that McDonough agree to donate 25 percent of his earnings to the Bridge School in the Bay Area (which Young founded), but also insisted that McDonough submit to physical examinations so Young could take out a $350,000 life-insurance policy–with Young (or his designee) as beneficiary.

Merely negotiating the 13-page agreement was difficult–and McDonough, a notorious hard-nose, didn’t make it any easier. At one point, wrangling over a detail with Young’s representative, Irwin Spiegal Osher, McDonough admits he cried, “Go ahead! Do it–and I’ll blow my goddamn brains out all over your cheap fucking white shoes.” Calls to Osher were not returned.

It is perhaps McDonough’s very doggedness, his refusal to be intimidated (by Young’s chronic rescheduling of agreed-to interviews and by numerous clashes with the singer’s unctuous handlers), that led to this mess.

While the nature of Young’s role is mystifying, it’s not completely out of character. As longtime personal manager Elliot Roberts (recalling the occasion when Young quit Buffalo Springfield, excoriated Roberts as inept, and then almost immediately rehired him to oversee his solo career) told The New York Times, “I thought, ‘Wow, cool–this guy is as devious as I am.’ ”

The manuscript of Shaky is under lock and key, but Hedges, to whom McDonough supplied a copy, describes it as “a real serious effort to get inside what makes Neil Neil. It’s not a puff piece, which is apparently what he wanted but never said–I sat at the table and looked Neil right square in the eye. Outside of the fact that Neil’s been involved in some pretty juicy things in his life, no, this is not a Kitty Kelly kind of a deal; it’s a legitimate biography, the product of a lot of very hard work. As I understand it, the response from Random House on the book was very, very positive.”

In a January 1999 letter Random House attorney Diana Frost wrote to Young attorney Osher, she called the book “an important and artistic biographical work that they expect will receive a positive reception from a wide audience.” (Frost refused comment, and calls to the book’s editor, Bruce Tracy, were not returned.)

Young’s reasons for rejecting the manuscript, according to McDonough’s attorney Henry Gradstein, were that Jimmy delivered the manuscript in “an untimely fashion”; that he had delivered it to Random House without Young’s personal approval; and, finally, that he was simply not going to give his approval.

Gradstein counters that the manuscript’s lateness was in fact owing to delays caused by Young’s own refusal to schedule promised interviews. And, he continues, in any case Random House had previously granted McDonough’s requests for extensions of delivery deadlines. Finally, he says, Young had no approval rights (save over passages dealing with the aforementioned immediate family).

Barring a settlement (active discussions are ongoing), the case should go to trial in spring of 2001. Gradstein is “absolutely certain” McDonough will prevail, while Young’s attorney Lee Phillips insists that Young has “appropriate defenses and possible counterclaims.”

MUCH of the dispute revolves around the following clause in Young’s agreement with McDonough: “Notwithstanding anything to the contrary herein, if Neil prevents Jimmy from completing and delivering the manuscript to the Publisher, then the entire Indebtedness will be Neil’s obligation and he shall discharge the same and hold Jimmy free and harmless therefrom. This shall be Jimmy’s exclusive remedy from Neil.”

Young contends that this, in conjunction with the language granting him approval over passages relating to members of his family, gives him “the right to prevent release.” As Phillips explains it, “You can see that [the clause] indicates that it’s . . . his exclusive remedy against Neil, so in other words . . . he can’t complain if the end result is that the book doesn’t get published. He can keep the money, and Neil’s got the liability with Random House.

“If there’s one comment about the family and Neil disapproved it, that comment then has already been delivered to Random House. Why have an approval right to prevent it from going out to the public . . . if that person has delivered it to the public?

“I mean, the fact is, it was done,” Phillips continues. “If it said some terrible thing, and you said, ‘I disapprove,’ and he said, ‘OK, I’ll take it out,’ then it would only be known to Neil and Jimmy. But if you deliver it to Random House and then deliver it to Neil the next day, Random House and all their editors and everybody else . . . that sentence is in there. And that’s the reason why I think a lot of this problem came up.”

Wait, there’s more: Young’s attorneys are also claiming that he has approval rights by alleging that McDonough failed to meet the already-extended Random House deadlines, creating a breach “frustrating the purpose and intent of the agreement” and “independently granting Young the right to prevent” publication. So, it’s a back-and-forth exchange of legal interpretation, the deviltry of language on the one hand so clear, yet on the other so ambiguous–depending on which side one favors–that it is apparently best left for Judge Richard C. Hubbell to reconcile.

Still, to some, the situation couldn’t be clearer. “It’s horrible what Jimmy’s been through,” says Hedges. “It’s so kind of insanely arrogant and malicious–it’s unthinkable. The whole situation is just mind-numbing, the way Neil led him on; he was just playing with him–playing with a life, his trust, everything. I mean, Neil is notorious, but this is crazy–it’s like being in the belly of the beast. There’s a kind of arrogance to celebrity, and this is just a very raw, vivid example of it.”

This article originally appeared in the L.A. Weekly.