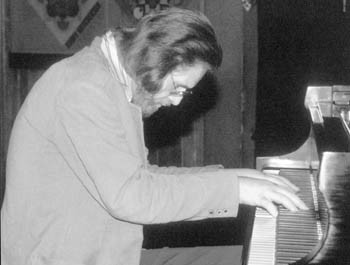 BIOGRAPHER Peter Pettinger once described the life of jazz pianist Bill Evans as “a slow suicide.” Racked by drug abuse and weakened by liver disease, Evans–renowned for his long lyrical lines and introspective style–displayed an unmistakable sense of urgency during the sessions heard on the newly released Bill Evans Trio: The Last Waltz (Fantasy), recorded just a week before his death in 1980 at age 51.

The eight-CD set, recorded over a nine-night engagement at the now-defunct North Beach jazz spot Keystone Korner, shows that Evans never gave up on his music, never lost his creative spark.

The box set is testimony that, as liner-note writer Derk Richardson points out in quoting Pettinger’s biography Bill Evans: How My Heart Sings, Evans’ personal “agony was defied to the end by his artistic ecstasy.”

There is little doubt that Evans knew he was dying when he performed these sessions. After the San Francisco dates, he returned to New York for a planned weeklong run at Fat Tuesdays. Evans managed just two nights onstage, staying home for three more and then succumbing to a hemorrhaging ulcer and bronchial pneumonia.

His death marked the end of a short but illustrious career that began in the early ’50s. Starting as a sideman for Charles Mingus, Miles Davis, and other notable jazz players, he established himself as a solo artist with the 1956 album New Jazz Conceptions. He went on to lead two celebrated trios under his own name and to record on several landmark jazz albums, including Davis’ Kind of Blue, Mingus’ East Coasting, George Russell’s Jazz in the Space Age, and Oliver Nelson’s The Blues and the Abstract Truth.

A quiet, somewhat nerdish figure, Evans didn’t integrate easily in the hip jazz world. In his 1989 autobiography, Miles Davis recalled the hazing he inflicted on Evans when the pianist took over Red Garland’s coveted spot at the keyboards in Davis’ band. One day, just to mess with his head, Davis told Evans that to stay in the band he would have to sleep with all the other band members, all males. Evans gave it serious consideration for 15 minutes before returning to Davis to say that he’d like to please everyone but that was something he couldn’t bring himself to do.

“I looked at him and smiled and said, ‘My man!’ And then he knew I was teasing.”

One thing Evans couldn’t resist at that time was heroin, a habit he picked up while playing in Davis’ band. Yet Evans left an indelible mark on Davis and the trumpeter’s influential work. Davis credited Evans with bringing the classical influences that underscored much of Davis’ finest work, including what Marin jazz writer Grover Sales once characterized as Davis’ “Debussy-like lyricism and reflective romantic delicacy.”

And despite the demons that dogged him throughout his troubled life, the artfulness of Evans’ improvisational work–so apparent in The Last Waltz sessions–was a driving force throughout his career. “There is a Japanese visual art in which the artist is forced to be spontaneous,” he once wrote in an essay on improvisation. “He must paint on a thin stretched parchment with a special brush and black water paint in such a way that an unnatural or interrupted stroke will destroy the line or break the parchment. Erasures or changes are impossible. These artists must practice a particular discipline, that of allowing an idea to express itself in communication with their hands in such a direct way that deliberation cannot interfere.

“The resulting pictures lack the complex composition and textures of ordinary painting,” he concluded, “but it is said that those who see will find something captured that escapes explanation.”