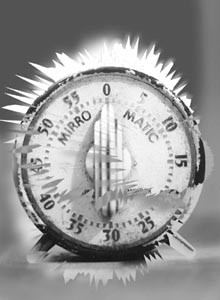 IN HIS TRAVELING days, Jeff Roberts always searched out the best local foods. Whether the trail led to an open-air Italian market in south Philadelphia or a great barbecue joint in the South, the ethnic or regional cuisine invariably made for better eating than fast-food restaurants.

“I like to eat. Part of my family is Italian and the other side is Jewish, so two of the world’s great food cultures have contributed to my interests,” says Roberts, who lives in Montpelier, Vt.

The goals of the Slow Food Movement fit perfectly with Robert’s ideas about food. Founded 10 years ago in Paris, the international organization encourages people to return to eating food that isn’t mass produced or processed in mass quantities.

The 60,000-member group, now based in Rome, is not just about slowing down and reconnecting with the good things in life. If it catches on, it could also have an impact on culture–and agriculture.

The president of the Slow Food Movement, Carlo Petrini, recently completed an 18-day tour of the United States to publicize the organization and to launch several new initiatives. Among those is a Taste Education Project aimed at introducing schoolchildren to traditional tastes and foods. Another is the Ark Project, which is intended to help save vanishing fruits and vegetables from the onslaught of convenience foods that are easier to grow and ship.

Roberts had already been involved in a program with similar aims. He is a member of the board of directors of the Vermont Fresh Network, which tries to connect the state’s small farmers with restaurant chefs. After Petrini’s visit to Vermont, Roberts and others plan to start a Slow Food chapter, or convivium as it is called, in the state.

Petrini originally had the idea for the movement after a McDonald’s opened in Rome’s Piazza di Spagna in 1986. The official founding of the group took place three years later in the Opera Comique in Paris. Among those present was Dario Fo, winner of the Nobel Prize in literature. Today, the group has chapters in more than 35 countries, including more than a dozen in the United States.

The group contends that “fast life” and the fast food that goes with it are overwhelming the good things in life, such as leisurely meals with friends or even ethnic cuisines. “Let us rediscover the flavors and savors of regional cooking and banish the degrading effects of fast food,” reads one line from the group’s “Slow Food Manifesto.” “Slow Food guarantees a better future,” reads another.

Eating this way may cost more, but that doesn’t put the group’s message out of the average consumer’s reach, Slow Food advocates contend. “In the United States, we spend more to diet than to eat well,” Roberts says.

FOOD IS important, but some members, like Karen Christensen, argue that food just opens the door to other attractive possibilities. Christensen helped organize a convivium in Great Barrington, Mass., in mid-May. Thirty people attended an afternoon tea that was complete with Welsh tea bread, watercress sandwiches, and homemade American pecan bars.

“Certainly there’s a gourmet element, but that’s not all,” Christensen says. “It is about encouraging people to get involved in issues by appealing to their sense of pleasure and taste in food.”

Christensen sees the Slow Food Movement as a way of alerting people to the need for taking environmental action, such as saving family farms that grow regional products. Referring to the doomsaying biblical prophet Jeremiah, Christensen says, “I’ve spent a lot of time on global warming and all these Jeremiah things. I don’t think it’s all that effective. It’s easier to get people involved by talking about things that are important to us.”

Christensen says she had her own run-in with the corporate fast-food world when she published a book, Home Ecology, in Britain seven years ago. References in the book to McDonald’s earned her threatening letters from the fast-food giant, which caused many bookshops to return her book, she says. The third edition of the book, under the new title Eco Living, will be published next spring–without the references to McDonald’s.

The Slow Food Movement has just launched a program designed to make children aware that there is more to eating than hamburgers and French fries. During a swing through California in late May, Petrini inaugurated the Taste Education Project, which included “slow food” cooking and tasting sessions in elementary school classrooms.

THE MOVEMENT leader also announced the start of the Ark Project. The project’s goal is to draw attention to fruits like the Gravenstein apple and vegetables like ramps and the Southern field pea.

The Gravenstein is one of the earliest-ripening apples. Sweet but tart, it is shunned by most commercial growers because it bruises easily and is difficult to ship, according to Barbara Bowman, who has written about disappearing American food for the movement’s magazine, Slow.

Ramps are a type of wild onion that grows in mountain areas of the South. Field peas, or cowpeas, once were grown in many varieties and flavors, but today the only commonly available variety is the black-eyed pea, which Bowman describes as bland in comparison with the other types.

Despite the organization’s aversion to mass-produced fast foods, the group’s website (www.slowfood.com) does make an effort to be even-handed. Besides offering connections to Internet pages dedicated to regional cuisines, it provides links to the corporate websites for Coca-Cola, Campbell, and Burger King.

Paul Bush, a journalist for 16 years, has published articles in the ‘Boston Globe,’ ‘Vermont Life,’ and elsewhere. He was also editor of ‘Southern Vermont Magazine.’

This article originated with the American News Service.