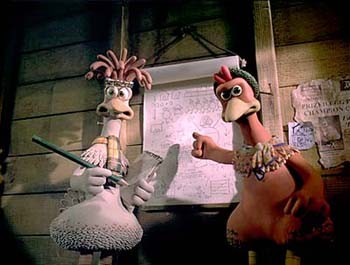 The Surreal Gourmet looks back on the year’s strangest hit

BOB BLUMER doesn’t get to a lot of movies these days. As one would expect from a man with so many hyphens in his title, the energetic author-chef-journalist-teacher-artist-designer-sculptor-television host and bon vivant is way too busy for movies, this year especially.

With the major release of a trippy new book–Off the Eaten Path: Inspired Recipes for Adventurous Cooks (Ballantine; $20)–and the massive 11-month tour to promote it, Blumer’s been a busy boy. So it’s something of a miracle that he found a bit of spare time, right in the middle of his tour, to go see the film Chicken Run.

An unexpected hit, the Claymation effort from Nick Park and Dreamworks has lingered in theaters around the world since its debut in June, and will probably still be playing somewhere when it’s released on video and DVD Nov. 11. A weird blend of The Great Escape and a Foster Farms commercial–the ones with the suicidal chicken puppets–Chicken Run brings us the story of a doomed flock of English chickens who’ve just learned they’ll be turned into chicken potpies if they don’t lay enough eggs. A broasted, excuse me, a boastful American rooster named Rocky (voiced by Mel Gibson) flaps in to attempt a rescue and add some spice to the animated stew.

“I saw the movie Chicken Run in a theater that was packed with kids,” reports the affable Blumer, whom I’ve managed to reach at a budget hotel somewhere in the state of Georgia. “Based on the looks of horror on the faces of those kids–mainly during the scenes where the chickens are almost sliced and diced and made into meat pies–I wouldn’t be surprised if a lot of those kids had a very hard time eating chicken from now on.”

“So, is that the effect it had on you?“ I suddenly wonder.

“Oh, not at all,” Blumer replies. “I had chicken for lunch.”

THE HOLLYWOOD-based Blumer, best known to Food Network fans as “The Surreal Gourmet,” is a spiky-haired 20-something for whom food exists mainly as another way to express one’s inner wackiness. And Blumer is wacky indeed. In his world, a bed of polenta must be fashioned to resemble an actual bed, with a crisp sheet-pasta blanket and matching ravioli pillows. A shellfish appetizer should be served in a plastic beach bucket with matching plastic shovel. And pound cake, instead of being offered up on a plate, can be cut into strips and served in a French fry container–with raspberry catsup on the side.

Blumer is equally fond of extraordinary cooking methods. In Off the Eaten Path, Blumer includes detailed instructions on how to steam salmon in your dishwasher, how to cook trout and shrimp on the engine of your car, and even how to melt a cheese sandwich . . . with your electric iron. There are also directions on how to throw Home Video Dinner Parties, in which Blumer imagines entire menus to accompany movies like The Godfather and Like Water for Chocolate.

But let’s get back to Chicken Run.

“You know, once it hits video, I think this movie really might end up doing for chickens what Babe did for pigs,” Blumer says, “which was to save a few from the old meat factory.” He pauses. “On the other hand, it could have the opposite effect. It could create a resurgence of chicken potpie consumption, a chicken potpie renaissance, as it were.”

“And why not?” I jump in. “I mean, chicken potpie is a dish so traditional it’s almost sacred, yet most gourmands seem to have relegated it to the ranks of such white-trash cuisine as possum stew and R.C. Cola. What’s so bad about chicken potpies?”

Blumer is amused at this outburst.

“There’s nothing bad about chicken potpies,” he says, patiently. “It’s just that they’re usually made with very mediocre ingredients. If I hosted a Chicken Run video night, the obvious thing would be to serve chicken potpies. I’d make it a really great chicken potpie, with really fresh, crisp vegetables, fresh peas, fresh carrots, and some really special gravy.

“But I’d take it one step further. I’d serve the pies in boxes, creating a piece of conceptual artwork in the form of boxes that match the pie boxes that the crazy farmer woman in the movie planned to package her pies in. And I’d serve wine in custom-made goblets that had little plastic chicken legs for stems.”

“I don’t know,” I queasily counter. “You said it yourself. Chicken Run is, in essence, a kind of defense of chickens, isn’t it? Wouldn’t serving chicken at Chicken Run be a little like serving ham at a screening of Babe?”

“Well, what about egg salad sandwiches then. Is that a decent halfway point?” He counters. “And for dessert, chocolate eggs, maybe. Or something with a good egg cream.”

“You forgot the appetizer.”

“Right,” he acknowledges. “For an appetizer there’s always chicken fingers and stuff like that. And the chickens in the movie actually have fingers, so chicken fingers would fit in very well.”

ALL OF THIS chicken talk is making me hungry. Which leads to the most important question of all.

“Of all the chicken characters in the movie,” I ask, “which one do you think would taste the best?”

“Good question,” he observes, then falls silent to consider it. “Hmmm. Do you remember if any of the chickens drank beer?”

“Well, there’s this fabulous recipe that has been sweeping the nation,” he says. It’s ‘Beer Can Chicken.’ Have you ever heard of that? It started off as an Internet thing, and I’ve never seen a recipe move so quickly.

“You take a tall can of beer–a Bud or something–and you drink half of it,” he continues. “Then you take a whole roasting chicken and you rub it down with salt. Now you grab it by the legs, and you pull the cavity of the bird down over the beer can, so the chicken is literally sitting on top of the beer can, using its legs to prop it up, like a tripod. You put it on your grill, in indirect heat, for an hour and a half. And that’s it.”

“It’s fantastic!” Blumer insists. “It cooks perfectly. The beer steams up into the cavity and keeps the interior of the bird very moist. And the beer can keeps the bird upright, exactly the way an expensive upright roasting rack would do.”

“So, if Rocky were a beer-drinking rooster,” concludes the Surreal Gourmet, “and I had the spare time, that’s the recipe I’d use to cook him up.

“And I bet he’d be delicious.”