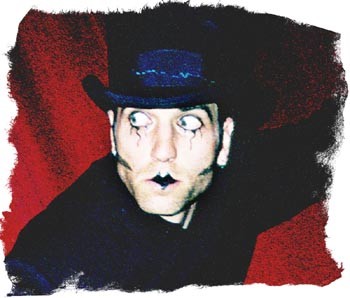 THE CROWD PEERS eagerly up at the darkened stage of the Phoenix Theatre. They know something is about to happen, but nobody’s quite sure what. Suddenly, flames shoot out from the abyss. An exotic, chiseled man in a turban and flowing pants steps center stage. He stares solemnly into the crowd for a moment–then spews a stream of fire from his mouth. The audience gasps.

Before this scorching opening act is over, the swami tosses fire back and forth between his hands, gulps down flames from a blowtorch, and lights rows of firecrackers on his forearms, standing stock still while explosives detonate on his skin.

So begins the Oddvillian Sideshow, a conglomeration of talents started in 1997 by three young performers from Sonoma: Jorg Scott, a talented trapeze artist who also serves as the show’s eloquent ringmaster; Andrew Spear, an adept physical comedian; and Tobias Weinberger, who performs as the aforementioned swami of flaming fame.

The entire show is darkly reminiscent of another era, when circus sideshows still offered access to the mysteries of the unknown, when the headless girl sent children screaming in terror, and the “unicorn” made women and men fall down and weep.

Scott calls the show a “collaboration of young, artistic energy.” At ages 16, 18, and 25, the three performers got together to turn their dream of the weird into reality, and the Oddvillian Sideshow debuted on the streets of San Francisco.

“It was a coming together, bringing all the things we’d done in our short lives and putting them in one crazy show,” says Scott, the oldest Oddvillian, who is now 28.

The group’s first performance took place in the tourist-trap atmosphere of Pier 39, and since then the sideshow has performed on the streets, at festivals, private parties, and the creative collective warehouse Cell Space in San Francisco. Every show is different, in part because Scott and his collaborators frequently bring in new guest performers.

One reason the act is so well honed today is the Sebastiani Theatre. Built in 1934 in Sonoma, the theater is operated by Roger Rhoton, a veteran vaudeville performer himself who has worked with Spear and Weinberger since they were kids.

Rhoton has been one of the troupe’s biggest influences: “The act developed here in the theater, so I’ve been involved with them since the beginning,” he says. “They’ve worked real hard, and they’ve put together a really good show.”

The Oddvillians spend up to 10 hours a week practicing on the Sebastiani’s stage: “The screen can be raised, and it gives us the time and space to work with all of our props,” Scott says. “We like that our show is such a production!”

AND WHAT a production it is. The next act at the Phoenix show is breathtaking. The lights go off, and a long, white stretch of transparent gauze drops from the high-vaulted ceiling of the stage. A muscular figure clad in white slithers from the wings.

It’s difficult to tell if the figure is male or female: its hooded body suit is skintight, and its face is painted with black-light-sensitive spirals in electric orange, blue, and green. The figure (actually Zeina Asfour, a guest performer from Marin) leaps up and grabs a length of the white gauze, dangling by one arm in midair.

For the first time, the audience notices a DJ (Darren Treinen) and turntables just behind the glowing figure. The music has thus far been so suited to the performances that it seemed to naturally float out of the air. Now, however, a pounding bass blasts out of the speakers and a techno-remix of Sting’s “Desert Rose” perks the audience up.

The mysterious figure begins to climb up the length of gauze, twining its ankles around the fabric as it gracefully pulls its way toward the ceiling. Suddenly, the figure lets go and plummets toward the stage. The audience gasps in horror, but the intricately looped cloth catches the performer, and it hangs in perfect balance, pivoting slowly in a graceful circle.

The act continues for 15 minutes, and the audience barely breathes until Asfour bows and runs offstage.

Suddenly, a loud crackling noise fills the theater and the audience looks around, wondering if all the excitement has shorted out the circuits at the Phoenix. But no, it’s actually Electro-Boy.

The stiff, silver-clothed figure is carried like a robot onstage by the ringmaster. He’s set upright, and the ringmaster flips a breaker switch on the battery pack Electro-Boy wears on his back. The DJ speeds up the crazy electronica, and Electro-Boy begins to break dance. He hypnotizes the audience with his skill for the five minutes it takes for his battery pack to wear out. Then the ringmaster returns to tote away the now-stiff figure.

Electro-Boy is Andrew Spear, who came up with the idea for the Oddvillian Sideshow at the age of 16. He lends a wildly humorous edge to the otherwise eerie production.

IT’S QUITE A SHOW– especially considering that it’s all presided over by a ringmaster who insists he didn’t think he’d go into the performing arts.

“I never wanted to do this!” protests Scott. “I didn’t know what to do.”

He ended up following in his father’s footsteps–sort of. Rick Scott is a children’s performer who travels the globe, telling stories and playing music. He’s also recorded seven albums.

“My dad was one of my hugest influences,” Scott says. “From him I got my stage presence, my sense of being comfortable on stage.”

Part of this presence may have been cultivated during Scott’s stint at circus school (from age 11 to age 15). He went on to teach the flying trapeze on cruise ships, and now teaches it at the San Francisco School of Circus Arts.

When asked about his future goals for the troupe, Scott thinks for a moment and then replies, “I want us to have a tesla coil.”

He won’t say what he wants it for. “You’ll just have to wait and see,” he says, chuckling evilly.