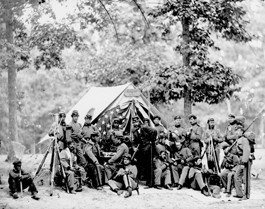 The Civil War is alive and literally booming in the pastoral burg of Duncans Mills. Civil War Days, one of the largest reenactments of the war west of the Mississippi, celebrates its 10th anniversary July 18–19 in the fields outside of town, currently being transformed into the Virginia battlefields of 1863.

Evidently, a strong physical resemblance between Virginia and Duncan Mills evokes the perfect setting for a Civil War reenactment. “The town’s isolation helps spectators pass easily from 2009 to 1863 because there are very few modern contrivances that meet the eye,” says Gary Amari, founding director of the event. Three encampments for public interaction occupy the site: two for Federal and Confederate troops and one for civilians that were displaced during the war. “Our main purpose is to educate the public by having people go into the camps to experience the environment of the time,” Amari says. Nearly a thousand re-enactors attend and recreate large armies for the battles. “We don’t use live shells, but we do shoot off real gun powder in the cannons, so don’t bring very young children or your dogs, because it gets extremely loud,” Amari warns. “We recommend people to bring earplugs.”

Civil War Days was created in 2000 by the nonprofit California Historical Artillery Society (CHAS) as a fundraiser for its “Sponsor a Rescued Horse” program. Over 35 horses have been rescued from the auction block (read: slaughterhouse) after their careers at California race tracks ended, and now board at ranches in Salinas and at Cassini Ranch in Duncan Mills. “We do a unique Civil War impression of mounted artillery,” says Amari. “CHAS owns cannons and rolling stock—wagons, caissons and limbers, rolling ammunition chests used by cannoneers. We are as detailed as we can get, and use authentic tack, saddlery and uniforms.” Only 20 artillery horse teams exist in the United States, and CHAS owns four of them. “If we weren’t supporting these beautiful horses,” Amari says, “they would be turned into food. We’re doing something useful.”