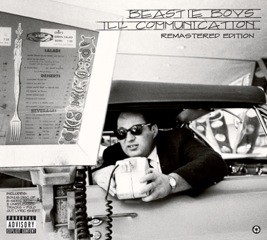 The Beastie Boys have proven that there ARE second acts in American lives. Case in point, 1994’s Ill Communication, which gets the deluxe edition/remastered treatment this week. While it’s hard to imagine today with the trio’s impeccable marquee status (which belies their last two quite tedious, lackluster records), there was a time when the trio seemed irrelevant has-beens.

But their fourth album took their potent new hip-hop/live punk, funk & smooth jazz mixture to the top of the pop charts. And the ways Ill Communication differed from their previous chart-topper Licensed to Ill make it one of the quintessential time-capsule works of the 1990s, along with Seinfeld, The Real World, and the same year’s Pulp Fiction. It was a negation or rectification of their former persona, the hard-partying, frat-boy prankster, misogynistic hedonists, and one that mirrored Generation X’s progressiveness (yet none of its postmodern disillusionment).

Instead of “skeezing with a whore”, Adam “MCA” Yauch had become a thoughtful urban Buddhist, showcased on solo songs “Bodhisattva Vow” and the eco-themed “The Update”, which possess the same devotion that led to the Tibetan Freedom Concerts two years later. They paid tribute instead of rebelled in “Root Down”. And although sex rhymes like the classic posse cut “Get It Together” with Q-Tip are anything but G-Rated, women are mentioned solely with love and respect throughout.

A decade and a half ago, it was really was novel to place different genres on the same record together. The sample-based rap track “Sure Shot” leading into the minute-long hardcore punk blast “Tough Guy” segueing into “B-Boys Makin’ With the Freak Freak”, a hip-hop amalgam of their live instruments, sporadic sound effects and their shrouded vocals, was innovative in the pop music world.

And before the Internet made available and engendered over saturation of all forms of media past and present, the Beastie Boys’ dizzying pop culture-survey course lyrics were exciting. Remember the perfect spoof of the “Sabotage” video? It was an original idea. And only then, in 1994, was Paul’s Boutique getting its well-deserved widespread attention.

While the benefits of remastering are pretty much unnoticeable, Ill Communication remains one of only three enjoyable Beasties albums, with no skipping required. While their lyrics and storytelling were already laughable by this point, what comes through the rather dated voice effect (sounding like a bad phone connection) is the ever-pleasing contrast of their voices, themselves becoming another form of instrumentation. As a whole, Ill Communication is intensely musically satisfying, and is more focused, conservative and polished (in a good way) than 1992’s more ragged yet uneven Check Your Head.

The bonus disc is a little skimpy at 34 minutes, but is worthwhile because of top-notch hip-hop outtakes, like the two-minute sparse gem “Dope Little Song” and “Resolution Time”, which more than deserved to be on the album, especially with its kick-ass sped-up busy phone signal loop. Highlights for fans will surely be the documented tomfoolery in “Atwater Basketball Association File No.172-C”, which is just audio of a particularly intense game of hoops, and “Heart Attack Man (Unplugged)”, a laugh fest revealing the song’s genesis as snapping on a friend. As always, the Beastie Boys seem here to be having more fun than the rest of us. Hopefully, September’s Hot Sauce Committee will exhibit that joy.––David Sason