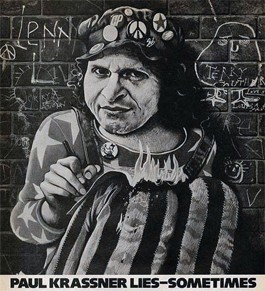 In the spirit of Lenny Bruce, his irrepressible muse and mentor, Paul Krassner has been talking dirty and influencing people for more than half a century. Unlike Bruce, he’s never been arrested and jailed for obscenity, and unlike Bruce, who died of a heroin overdose, he’s well into his 70s. He continues to talk dirty and he continues to be adored by the likes of Arianna Huffington, who wrote the preface for his latest collection, Who’s to Say What’s Obscene? Politics, Culture and Comedy in America Today (City Lights; $16.95). He appears July 18 in Napa.

All of the essays in Krassner’s new book have been published before—in High Times, The Huffington Post, The Nation and The L.A. Weekly—but they all read as though they were written yesterday. That’s because Krassner is always shocking, always provocative and for all his shenagigans, amazingly serious about the pornography of power and the obscenity of war (as well as Somali pirates and piracy on the web).

A standup comedian since the 1950s, and the founding editor of The Realist, the satirical magazine that gave birth to the underground press of the 1960s, Krassner isn’t afraid to make fun of anything or any one. I’ve known Krassner since 1970, when he published an article of mine in The Realist that spoofed Timothy Leary and Eldridge Cleaver. It was Krassner’s talent then to treat those two gods of the counterculture as irreverently as he treated the politicians in the White House and the generals into the Pentagon. A sycophant he never was. Today, his comedic spirit goes marching on in the guise of Jon Stewart and Stephen Colbert.

Who’s to Say What’s Obscene? offers a romp through the annals of American humor. Krassner has known most of the great 20th-century comedians, including Lenny Bruce, Mort Sahl, Richard Pryor and Chris Rock. In these pages, he pours out the funny stories about them that he’s saved up for years; whether they’re true or not is another story. As Norman Mailer points out in an article that’s reprinted here, Krassner has a knack for outrageous embellishment in the manner of Jonathan Swift’s Modest Proposal. Krassner, as Huffington asserts in her laudatory foreword, belongs in Swift’s “savory tradition.”

Krassner is also funny in person and his gravelly voice fills a room. It seems fitting that after a lifetime of making fun of back-room deals and of alcohol, too, he’s appearing in Napa at Back Room Wines. He’s as irreverent about himself as anyone else.