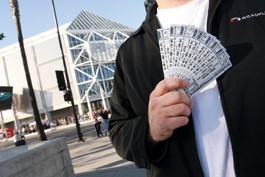 So, the Hannah Montana tour finally came to the HP Pavilion, ending not only the begging and pleading by tweenage girls desperate to go to the show, but also the moaning and groaning of parents who are still sore about the ticket prices. Face value for most tickets was less than $100, but according to StubHub, an online ticket marketplace owned by eBay, the average selling price was $249, with the most expensive single ticket selling for $2,565.

Me? I casually turned down two second-row tickets selling at face value on the day of the show. They were easy to find with the help of a friendly “ticket retailer” named Alex.

Alex is the guy who sells tickets just outside of a show. Many would call him a scalper, but he insists that what he does is different.

“I say, ‘No, I’m a retailer, sir,'” says Alex, who asked that his last name not be used. “I know where my tickets came from, I know they’ll get you in the door and they’re also good seats. You’re paying for the service, versus some scalper.

“The fact of the matter is,” he says, “it’s a kind of scummy business to be in, but I try to put it in perspective for people.” By which, of course, he means people who get angry about brokers buying up tickets. “I say, ‘Oh man, I went to New York City, and they bought up all the land! They didn’t even save any for me!'”

Here’s another real estate metaphor: He’ll sell you tickets for the price he paid for them, if you’ll sell him your house for the price you paid for it. And like some houses, some tickets depreciate in value, too.

The justifications for his profession are many, and so are the methods by which Alex procures his tickets, because in the $2 billion secondary market for tickets, he explains, there are “many different angles and loopholes and weaknesses that people exploit” to get the tickets you want before you can.

Why You Can’t Get Tickets

Unbeknownst to the average ticket buyer, many of a concert’s tickets are spoken for before they even go on sale. Some ticket brokers even own their own season tickets, which they can resell as a ticket to a particular show long before the tickets have gone on sale. The remaining seats are picked over by the promoter of the show, fan clubs, the venue itself, group sales and, if the promoter dictates, pre-sale auctions.

What’s left goes on sale to the general public, and this is the part where feelings get hurt. Popular shows like Hannah Montana literally sell out in a matter of minutes through Ticketmaster’s many channels, including retail locations, phone orders and online orders. So why, when the dust settles after tickets sell out in minutes, are you left empty-handed while online ticket brokers have immediately posted thousands of tickets for sale at premium prices?

Some people insist that Ticketmaster is conspiring with the brokers to extract more money from the public.”

I would like to know how, within 20 seconds of a show going on sale, I could not find any seats together at any price at this event,” complains one disgruntled Ticketmaster customer. “However, there are gobs of them for sale on many different scalper sites. How is this possible and why is this tolerated? The only explanation for this is that people inside TM are in cahoots with these criminals.”

Unsurprisingly, the computerized ticket ordering system is vulnerable to hacking, and Ticketmaster says the brokers are using software to “cut in line.” At Ticketmaster’s behest, a federal judge in Los Angeles recently ordered a company called RMG to “stop creating, trafficking in, or facilitating the use of computer programs that allow its clients to circumvent the protection systems in the Ticketmaster.com website.”

In the legal paperwork, Ticketmaster avers that “RMG has not denied that its programs were used by two admitted clients to block public access and thereby acquire tickets to highly sought-after ‘Hannah Montana’ events. . . . One RMG customer alone recently placed about 9,500 orders to purchase almost 24,000 tickets using RMG’s technology.”

But even if Ticketmaster implements better security to protect itself against such attacks, that wouldn’t stop tickets from making their way to the secondary market. Brokers are people too, so they still have a right to buy tickets, and reselling them is not illegal in most states (and even where it is illegal, the law is rarely enforced). Even nonprofessionals occasionally cash in by buying an extra set of tickets and reselling them for twice the price, effectively making their tickets free.

As one anonymous broker puts it, “Websites like eBay make it very simple for anyone to sell their concert tickets. History shows us that high prices will continue for any product for which demand is greater than supply. What the enraged public should be bitching about is that the concert promoters don’t plan more performances [increasing supply], so that prices come down according to the normal rules of a capitalist market. Government regulation not necessary, lawsuits not necessary, Timmy’s cryin’ not necessary.”

Economist Doug Campbell, who works at the Federal Reserve Bank of Richmond, Va., responded to a lawsuit brought by Lyn Peraldo, who sued a ticket reseller for charging her $1,050 for four seats, in a recent column posted on his company’s website. “This complaint misses the point,” Campbell argues. “The ticket company didn’t inflate the price; the forces of supply and demand did. . . .The more fundamental issue is that promoters of the Hannah Montana series apparently haven’t priced tickets commensurate with demand, opening the door to a secondary market with much higher prices.

“Campbell suggests an alternative model where seats are auctioned off to the highest bidder—a service already offered by Ticketmaster, but not widely used by the promoters who hire the ticketing giant. Industry insiders speculate that more promoters will start using auctions as a means of capturing some of the money that would otherwise go to ticket resellers.

In the meantime, according to ticket professionals like Alex, “Don’t wake up early on Sunday morning [to get tickets], because you don’t have a chance.”

I showed up at the HP Pavilion at 2pm on Sunday, exactly two hours before the Miley Cyrus (aka Hannah Montana) “Best of Both Worlds” show was scheduled to begin. I waited to meet with Alex, who was driving down from up north to take his tickets “on the walk.” He was dressed casually in a plain black jacket and a baseball hat, and explained that he likes to keep a low profile. He looked for and often spotted plainclothes cops.

“My angle is, 19 out of 20 times, I’ll be able to get you a ticket that is better than you could ever even lay your hands on—for face value or less,” says Alex. “That one time out of 20, I gotta pop ya—the market is what the market is.”

He says the eight tickets he sold made the trip down from San Francisco worth his while; he wouldn’t tell me how much he sold them for, but more important was knowing how he got them. Some he simply buys, from Ticketmaster or StubHub or from brokers. Some he gets himself by sheer diligence; Ticketmaster often releases more tickets to sold-out shows without warning. But mostly he gets tickets from brokers.

“I’m basically a liquidator,” Alex explains. “Tickets are a perishable good, and those ticket brokers, when they buy, they do everything they can to sell those tickets, but they get stuck sometimes. I have found a way to monetize those seemingly dead tickets.

“We watch as 14 girls poured out of a stretched limo in midscream and midstride, screaming and running towards the Pavilion. As the lines dwindle and the show finally begins, Alex introduces me to David, another ticket seller. I had seen him earlier chatting with cops, talking on his cell phone and spending time at the ticket booth, but had no idea that he was buying 90 tickets at face value, all of which he sold before 4pm. He said the insane demand was caused by the promoter, who simply didn’t release enough advance tickets.

David and Alex urged me to go see for myself, so I walked up to the ticket booth to find out if I could still get a pair of tickets. The woman in the booth quoted me the price: $116 each, for second-row seats. I felt a brief rush—the one you get for being in the right place at the right time. Then I just walked away, little girls’ shrieks still echoing in my head.