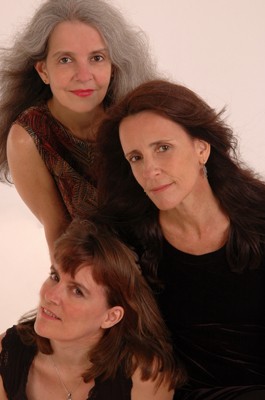 Christmas was the starting point for the Roches.

“We traditionally did Christmas shows in New York for years. That’s how we started singing as a trio, on the streets at Christmas,” Suzzy Roche recounts cheerfully by phone from her Manhattan home. “That was when you used to be able to hear things on the street in New York,” she adds, “before it was just a complete sound of trucks and construction.”

Eventually the trio—Suzzy and her older sisters, Maggie and Terre—released a full-fledged Christmas album, We Three Kings, a 1990 disc that features their choral harmonies on the second-best known chorus from Handel’s Messiah, “For Unto Us a Child Is Born.”

“That was one of the first things we started doing way back when,” Roche confirms. “It was something we learned in high school, and we just figured out how to do it on the street.”

Not that they improvised their arrangement on the fly, she adds. Like all of their vocalizations, it was the product of a determined, sometimes difficult effort.

“It’s very, very painstaking,” Roche says of their collaborative creative process. “I think it’s one of the reasons why nobody else sounds like us. I can’t imagine that anybody would be crazy enough to sit down and do what we do. It’s note by note and everybody picks their own note, and it can get pretty heated up there, deciding who’s going to sing what. But it’s the way we’ve always done it, and we have a kind of common musical language at this point.” The Roches appear at the Mystic Theater on Nov. 17.

All three sisters write, individually and in multiple combinations, but authorship is rarely a point of contention. “Sometimes we purposely will do something like, somebody will write lyrics, give them to somebody else to write music and then somebody else will sing the main melody,” Roche explains. “In that way, you take it out of singular voice and put it in the group’s voice, and that’s really what the Roches is. It’s a sound of three parts.”

The three sisters came together earlier this year to write and record Moonswept, the first new Roches album in more than a decade. Not that they’d been sloughing off in the meantime. “Since the last trio record [1995’s Can We Go Home Now ], I’ve been involved in four records, two solo ones and two with Maggie, and Terre’s made a solo record, too,” Roche notes. “So there’s been a lot of activity, just not as the trio.”

Why now? “It just kind of happened organically,” she laughs. “In some ways, the project decides for you, whether people are up for it or not. These projects are enormous undertakings, and you never know where they’re going to lead, so it takes a certain amount of commitment. This last one, we were all three on board right away”

Moonswept is a seamless addition to the Roches catalogue, with characteristically spare production, close but unconventional harmonies, and a brace of new songs with the sisters’ usual off-center humor and unexpected insights. The surprise is four tunes from outside sources: “Long Before” is written and lovingly sung by Lucy Wainwright Roche (Suzzy’s daughter with Loudon Wainwright III, who will open the Mystic show), while the old Ames Brothers tune, “The Naughty Lady of Shady Lane,” was a family favorite when the sisters were young and still sharing a room at home.

The other two, “Jesus Shaves” and “No Shoes”—the latter, an energetic, absurdist riff on the revelation of a shoeless man who met another who lacked feet—were both contributed by a New York character known as Paranoid Larry, with whom Maggie Roche sometimes performs.

Now, as the year winds down, the Roches are touring in support of the new album, with a few holiday shows soon to be sprinkled into their schedule. But the road is just a change of scene for their daily interactions. “We see each other pretty much every day,” Roche explains. “We sorta have to. It’s a full-time type of thing.”