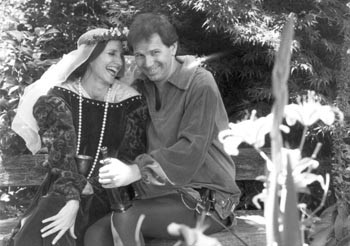 The Lady’s Not for Burning

Hot date: Elly Lichenstein and Lucas McClure star in The Lady’s Not for Burning.

CRANK UP Richard Strauss’ Also Sprach Zarathustra, grab a femur, and get down like an awestruck monkey: There is a monolith in our midst (à la 2001). This season marks the silver anniversary of Petaluma’s Cinnabar Theater–a veritable monument to local theater, whose A-class productions have been emblematic of innovation for the past quarter century.

This landmark year opens with playwright Christopher Fry’s pyrotechnic verbal extravaganza The Lady’s Not for Burning, under the expert direction of Lucas McClure. Written in verse, Fry’s play is a riotous frolic of wit and romance set in millennial-mad 15th-century England.

Enter Thomas Mendip (the ever affable Lucas McClure), a world-weary ex-soldier who has become dead-set on taking leave of life after contracting a virulent bout of existential philosophy. He pleads guilty to the murder of a missing “rag and bone man” and demands capital punishment from Mayor Hebble Tyson (an appropriately supercilious Sean Casey), who, of course, thinks him too foolish for further thought. Complicating Mendip’s death wish is the arrival of Jennet Jourdemayne (a positively glowing Elly Lichenstein), who has been accused of witchcraft–specifically, of turning the same “rag and bone man” into a dog. Love ignites between the two even as sundry complications are foisted upon them, including an impending doom at the stake. Together, McClure and Lichenstein produce more onstage sparks than an ice skater going for the land-speed record on asphalt. McClure’s droll, vitriolic deliveries are well matched to the playwright’s exquisitely crafted repartee, and Lichenstein plays Jennet with refreshing intelligence, sass, and romantic appeal. The lovestruck couple achieves a sweet and sexy banter that spans the gamut from salvos to salvation in two (slightly trimmed) acts.

But absolutely and unequivocally stealing the show for the duration of his lamentably brief stage time is J. Rene Bonel as the inebriated nincompoop Matthew Skipps. The broad comedy of the character’s rants and manner brings the house to convulsive laughter. If comedy is about timing, then clock-perfect Bonel is surely Swiss-made (even though he boasts the production’s only authentic English accent).

Cinnabar’s The Lady’s Not for Burning bodes well for the theater’s continued longevity and for the remainder of its 25th season. As they say, “It’s full of stars.”