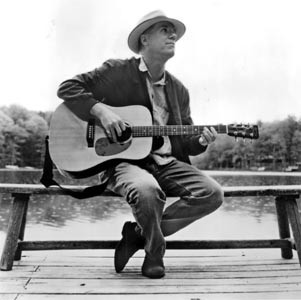 I’LL BE RIGHT with you,” says Loudon Wainwright III, answering the phone on the fifth ring. “I just want to turn down the old television–I’ve had Clinton up for a while.”

Oh. Right. Clinton. This interview is taking place, it so happens, on the very same day that the president’s infamous grand-jury video is being aired all over the world, part of the GOP’s transparent effort to turn its Democratic nemesis into road kill on the public opinion highway. Wainwright, who’s been keeping up with the whole debacle–and who doesn’t think Clinton looks half bad defending himself on the video–certainly knows a thing or two about road kill: Though he’s written hundreds of ingeniously crafted, inventive, and beautifully melodic songs throughout his 30-year career in music, he is probably best known for the campfire classic “Dead Skunk in the Middle of the Road,” a Top 20 hit in 1972.

Not to mention that he’s the father of rising music star Rufus Wainwright.

When Wainwright the elder arrives in Sonoma County Oct. 8 at the Mystic Theater in Petaluma, he’ll be performing songs selected from 16 albums recorded over the last three decades. His latest, Little Ship (Virgin), has been enthusiastically pointed to–by scads of publications from Entertainment Weekly to the New York Times–as an example of a singer-songwriter working at the top of his craft. With background vocals by Shawn Colvin, the CD is Wainwright doing what he does best: zigzagging from silly, tongue-tying goofball songs–the horny, pun-filled “Breakfast in Bed” and the manic-depressive “The World (Is a Terrible Place)”–to songs of heartbreaking honesty and frank personal insight (“Four Mirrors,” about his growing resemblance to his father, and the wise-in-hindsight “Our Own War”).

Then there are the songs, such as “Bein’ a Dad”–with the lyric “A daughter and son can be sort of fun, as long as they don’t defy you./ They’ll treat you like a king, they’ll believe anything, and they’re easy to frighten and lie to”–that can literally make an audience laugh and cry at the same moment. That’s a nasty little trick that Wainwright, a masterful worker of live crowds, seems to take special delight in.

“A show should be just that, a show,” he says when he picks up the phone again. “There should be a certain theatricality to it. I don’t see myself as a recording artist so much as a performer. I love to perform, to spontaneously banter with a crowd. The stage is the most natural environment for me.

“There are certainly nights when I don’t enjoy myself, for whatever reason,” he allows. “But in general, I love to stand up there and jump around and sing these songs.”

By “these songs,” Wainwright does not necessarily mean the one about the dead skunk. Though he will still occasionally surprise an audience with it, he rarely sings that particular song any more.

“That was a long time ago,” he says, good-naturedly. “And there are lots of other, better songs to sing.”

AS FOR THE PATENTED LW3 acerbicity, he doesn’t think he necessarily deserves a reputation as folk music’s reigning pessimist. This in spite of such songs as “The World,” with the verse “The world is a crappy old hole, from bottom to top and from pole to pole./ No, there’s no good news, this world’s useless./ I’m out of here, that’s my goal, ’cause the world is a crappy old hole.” This performed on a banjo, “the ‘happy’ instrument of folk music,” as Wainwright calls it.

“Well, the world is a crappy old hole, sometimes,” he laughs. “But ‘sometimes’ is the key word. I don’t want people to think I’m a complete misanthrope. The truth is that the world is interesting and amazing and beautiful–and it’s also a terrible place.

“Actually,” he adds, “I mainly wrote that song to mess with and piss off Pete Seeger,” the world’s greatest promoter of the Happy Banjo mindset.

As for son Rufus, Wainwright affirms that he’s done pretty damn well for himself. “As well he should,” he beams. “He’s extremely talented, I must say. His sister Martha, also, who sings on his record and who’s sung on my albums–she’s also doing very well. She’ll be cutting her own record soon, it looks like. So both of those kids are off and running.”

He pauses a split second, then adds one more remark to describe his parental pride. Not surprisingly, it sounds like the lyric from an LW3 song. “I’m proud of them, jealous of them, annoyed by them,” he says. “Hopefully, they’ll buy me a house.”