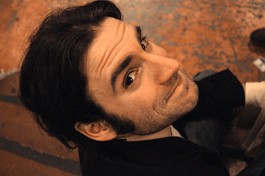 One would think that smiling on your brother would have broad, cross-generational appeal. But when you’re talking about hippie icon Jesse Colin Young, age 66, playing at the teen-friendly Phoenix Theater, then pierced eyebrows get raised. They ask, what’s with all the geezer acts at the Phoenix, man?

Never fear—it’s just the adventurous taste of 24-year-old Jim Agius, whose ancestors were in Petaluma before the Phoenix started life as the Hill Opera House and who has manned the Phoenix Theater’s booking now for nearly a year. While a small handful of teens who spend time at the Phoenix might cry treason, Agius has been challenging perceptions of an older local demographic who might otherwise fall back on the tired subscription of the Phoenix as a run-down punk palace covered in spray paint. “It is definitely a punk-rock-looking venue,” he admits, “and some people aren’t into that.”

The Phoenix’s reputation may have had something to do with this weekend’s Gallagher show getting cancelled, Agius thinks. Of the 50 dates on the watermelon-smashing comedian’s current tour, Petaluma’s show had the lowest ticket sales (about 80). Agius cites two sold-out shows at the then-LBC in 2001 as an indicator that Gallagher should theoretically still be popular around here, but, he says, “I just think a lot of people don’t really like the Phoenix, older people, and I think they will not go see a show at the Phoenix. I think that’s why this show didn’t do well.

“Ironically, before I started doing shows a year and a half ago,” he adds, “I never really went to the Phoenix at all, and I was in that same mentality. So I can see where they’re coming from.” But through sold-out shows in the past year with David Allan Coe and Blue Öyster Cult, Agius has also seen first-hand what experience can do to locals’ preconceptions about the historic haven. “They get there, and they probably have a bad first impression,” he says, “but then they get in and they like it.”

For the upcoming season at least, Agius is back to booking shows with younger appeal. Tiger Army, Bone Thugs -n- Harmony, MxPx, the GZA and New Found Glory are all on deck through October. But don’t count out classic rock just yet. Agius promises that he’ll remain on the power-chord prowl. And hey, after all, the Phoenix in the 1980s hosted the Allman Brothers, Van Morrison, Los Lobos and the Band. “I am open to any huge act who would want to play there,” he says. “I mean, Grand Funk Railroad? Sure! Bachman Turner Overdrive? That’d be neat! I hear they’re getting back together, actually.”