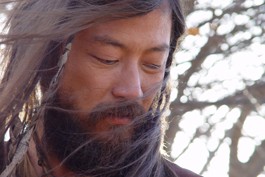 Forget Zohan, what about Genghis Khan? Now there’s somebody you don’t want to be messing with. Which might explain his cultural staying power, and why a movie about him made seven centuries beyond the man’s lifetime could actually find an audience. From Russian director Sergei Bodrov (fondly if barely known to American audiences for 1996’s Prisoner of the Mountains) and co-written with Arif Aliyev, Mongol is a beauty. As world-conqueror biopics go, this is sort of the anti-Alexander, consistently dignified in the way Oliver Stone’s picture was consistently risible, and justified by its enthusiasm alone in a way the latter certainly wasn’t.

At once sweeping and intimately confidential, with durably magnetic performances by Japan’s Tadanobu Asano as the adored warlord and China’s Honglei Sun as Jamukha, his blood brother and eventual enemy, the subtitled Mongol, a 2007 Best Foreign Film Oscar nominee, has to be by far the best action epic of 12th- and 13th-century Asian nomads screening this month.

And besides, really, how else would we get to know the founder of the Mongol Empire, one Temudjin by birth, whose heavily burdened boyhood and intensely stoic manhood combined to bring about his inevitable Khanhood? It’s no use holding out hope for the definitive written record of his early life, so an honorably dramatized, handsomely photographed motion picture record will have to do.

We all know about the rape and the pillage. But what about the honor and the justice? As a youngster, Temudjin (well played by Odnyam Odsuren) brazenly chose a bride from the wrong clan (or, more accurately, let her choose him), saw his father poisoned and his own clan betrayed from within, suffered long and grueling periods of slavery, watched helplessly as his wife got stolen, earned a break or two from the god Tengri, bringer of thunder and, yes, made himself into a willful, fearless warrior. None of this is at all easy to watch, but thanks to Bodrov’s clarity of purpose, it compels.

The first installment in a proposed Genghis Khan trilogy, Mongol is the movie that’s supposed to leave us thinking, “Oh, so that’s why he was so aggressive.”

“Mongols need laws,” Temudjin says about midway through the movie. “I will make them obey, even if I have to kill half of them.” To many a hawkish pundit’s dismay, they’re just not teaching this stuff in the MBA programs and legislative chambers nowadays.

But back in the day, or at least in the Year of the Earth Tiger (1218), well, guess who got some serious results with that particular strategy of governance? Doing so meant negotiating variously shifty and potentially deadly alliances, maintaining an unflappable determination to rescue his kidnapped wife (Khulan Chuluun) and enduring no shortage of blood-spraying combat on her behalf—and, of course, his own. It also helped that he wasn’t afraid of thunder.

True, simply having presided over the biggest contiguous empire in history doesn’t make him automatically interesting to everybody. To get the most out of Mongol, you’ll probably have to give a damn about the Greatest of All Rulers to begin with. But the richness of the movie’s detail and its overall temperament, demonstrably more at home in the art-house than in the multiplex, tend to seduce.

Shot on location in the snowy steppes of Kazakhstan and Inner Mongolia, Bodrov’s tale can’t help but seem ancient and authentic. The pace is commendably unhurried and the scope swells up in a way that is organic to a character-driven story, instead of simply eager to get to the next CGI-enhanced battle scenes. If it feels longer than its two-hour running time, it’s only in the best possible way. And if some of Bodrov’s sequences occasionally seem to drift and hiccup, the net effect remains an arresting piece of portraiture—not to mention an invitation to partake of his trilogy’s next two installments. The movies may not last another seven centuries, but thanks to their contribution, the Genghis Khan mythology certainly will.