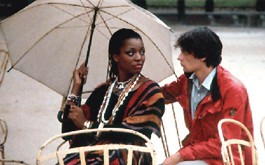 Rialto Cinemas proprietor Ky J. Boyd says that Diva “changed his life” and is one of the main reasons he became an art-house operator. No surprise, then, that his Santa Rosa theater made room in its already crowded summer movie schedule for a one-week-only run of a new 35 mm print of the film. But beyond the heaping piles of praise heaped upon it, what really makes Diva worth seeing is how darn entertaining and original it is.

Jules (Frédéric Andréi) is a mild-mannered, Moped-driving mailman obsessed with American opera star Cynthia Hawkins (Wilhelmenia Wiggins Fernandez), a diva who refuses to immortalize her singing with any sort of recording. After he secretly records one of Hawkins’ concerts for his own private collection, Jules naturally assumes that the dangerous men following him are intent on recovering the stolen performance.

While there are a couple of Taiwanese gangsters who know of his bootleg and are driven to retrieve it for their own monetary gain, Jules doesn’t know that a prostitute also recently hid a tape recording of damning evidence against the head of an international drug and prostitution ring on his person just before she was murdered. On the run for reasons he doesn’t fully understand, Jules, with the help of his eccentric bohemian friends Alba (Thuy An Luu) and Serge (Richard Bohringer), struggles to evade his pursuers long enough to make a romantic connection with Hawkins herself.

Beineix devotes ample attention to populating his world with full and wildly original characters. The diva of the title is a MacGuffin in the grandest sense; the storyline doesn’t revolve around her, but her presence nonetheless drives the narrative along. Jules plays something of a straight man to everyone around him from sunglass-wearing, awl-obsessed hitman Le Curé, played by Dominique Pinon (French film fans will recognize him as popular director Jean-Pierre Jeunet’s frequent collaborator), to the rollerskating, thieving, would-be fashion model Alba.

But the most unique of all is the enigmatic Serge, a recurring character in a series of novels from the author of the book on which the film is based. With his Zen-like demeanor and mysterious lifestyle, Serge is both a wild card and deus ex machina; we are never quite sure of his motivations and place in the story until the very end. And what an end!