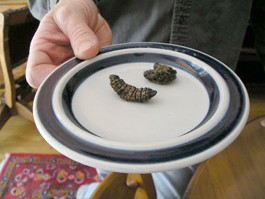 I‘ve figured it out. I’ve come up with a way to counter the world food crisis, ease global warming and alleviate rural poverty while at the same time interjecting some excitement into the daily routines of millions of Americans.

As a source of protein, eating insects is dramatically more efficient and easy on the environment than a bacon cheeseburger. Raising livestock is a resource-greedy industry that requires vast acres to grow feed crops, huge petroleum inputs in the form of pesticides, fertilizers and transportation. Then there are the clouds of heat-trapping methane gas that cattle release, shall we say, into the atmosphere. It’s estimated that cow flatulence is 23 times more potent than CO2, a major heat-trapping gas.

According to the Food and Agriculture Organization of the United Nations (FAO), livestock are responsible for 18 percent of greenhouse-gas emissions as measured in carbon dioxide equivalent. This figure includes 9 percent of all CO2 emissions, 37 percent of methane and 65 percent of nitrous oxide. Altogether, that’s more than the emissions caused by transportation.

Insects, on the other hand, are the clear green and nutritious alternative. In a recent issue of Science News, researchers found that that the lowly cricket contained more than 1,550 milligrams of iron, 25 milligrams of zinc and 340 milligrams of calcium, and can be more nutritious than an equal quantity of beef or pork.

Many insects also are richer in minerals than meat. And most lipids in insects, i.e. fats, tend to be long-chain, unsaturated fats that are healthier than those in conventional livestock. Many insects also have high concentration of essential amino acids including lysine and tryptophan, two nutrients that tend to be scarce in the diets of people in the developing world.

Of course, my idea isn’t new. Traditional, rural-based cultures around the world have been eating insects for thousands of years, because they recognize a free lunch when they find one. In Mexico, grasshoppers are an ancient delicacy. Toasted grasshoppers seasoned with lime juice, salt and chile are known as chapulines. The little bugs are cleaned and washed before being cooked, and have a nutty flavor. They’re served in a little bowl, and you eat them with your fingers, kind of like pretzels. They’re quite good.

In Southeast Asia, fierce-looking giant water bugs are roasted and yield a succulent morsel of meat that’s said to taste like scallops. Bamboo trees are host to the succulent bamboo worm.

In Central Africa, mopani worms, actually the larvae of the emperor moth, are a significant source of nutrition and income for the rural poor. They’re a good snack, too. I tried a dried and smoked mopani worm, and while it was a bit dry, it packed a crunchy texture and mild, meaty flavor. Add a little salt and maybe some chile powder, and it would go great with a cold beer.

There’s even a handful of entomophagy (insect eating) advocates in America, like Sunrise Land Shrimp (www.slshrimp.com), a company that seeks to educate people about the benefits of eating insects and develop sources and markets for edible bugs. Of course, there is some rather entrenched opposition to eating bugs in the United States. But our tastes are learned, culturally acquired behaviors. Why is it OK to eat fermented mammary-gland secretions (cheese) and trash-eating marine arthropods (lobsters) but not roasted grasshoppers? Maybe the changing climate and global food shortages will force us to reevaluate what we eat one day.

Who knows? Insects could be the next culinary trend. Peasant cultures have given us some of our most delicious food. Oxtails, short ribs, pig trotters, polenta and broccoli raab were once lowly ingredients that have been elevated to haute cuisine. At the French Laundry, one of chef Thomas Keller’s signature dishes is “Tongue in Cheek,” braised beef cheeks paired with sliced calf’s tongue, a dish made with cheap ingredients that don’t usually conjure up fine dining.Is it hard to imagine an avant-garde, white-tablecloth restaurant serving something like sautéed bamboo worm curry? At this point, yes. But with food prices high and climbing, and the environmental impacts of industrial agriculture, I’ve already expanded my little vegetable garden to help reduce my grocery bill. Maybe I’ll start training my ears toward the bushes when I hear that familiar chirp-chirp at sunset.

Land shrimp on the barby, anyone?