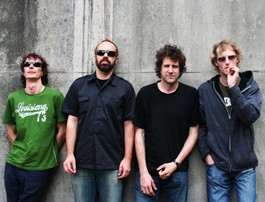 It takes more than a reunion to bring the past alive

Last month, the New Yorker magazine had a little write-up of an upcoming Swervedriver show in its “Night Life” listings. As a Swervedriver fan, I paid special attention to the brief mention, especially its last sentence: “Swervedriver lasted from 1989 to 1999, but it has since re-formed for a second stab at stardom.”

The word choice of that last phrase bugged me. Swervedriver’s following is small but devoted, and their importance in the general scheme of popular music is fairly minute—their first stab at stardom was marked with record label setbacks and the eclipsing glare of grunge. But it seems dubious that the motivating factor for the band’s reunion is fame; though currently touring internationally, Swervedriver have no new album to support, and the band members, fairly unassuming guys at the starting end of middle age, are not the type to seek the spotlight.

By the time the New Yorker‘s Swervedriver preview appeared, I’d already seen the band when their tour passed through my neck of the woods. Mr. Bir Toujour had been eagerly awaiting the show, and even though we’d already purchased our tickets, he kept on asking, “You still want to go, right?”

Yes, but wanting had nothing to do with it. This was Swervedriver, who I’d never managed to see live, and not going was inconceivable, just as we were duty-bound by our place and time in pop culture to see the new Indiana Jones movie, no matter how disappointing it might be.

My main reference point of what to expect from the show was Mr. Bir Toujour’s description of his experiences seeing Swervedriver through the 1990s. At one show in San Francisco, the band didn’t emerge onstage until nearly one in the morning, they wore sunglasses and they played all kinds of loud.

Such behavior should be met with approval, I suppose, but part of me was dreading the prospect of hating Swervedriver for making me stand around for hours while they fiddled with their sunglasses backstage. The last half-dozen shows I’d been to were all marked with narcoleptic episodes of napping, occasionally while standing up, and if I fell asleep seeing one of my favorite bands, what kind of music fan would that make me?

On the big night, I wore slacks and clogs to the club. There was a time when it was of vital importance to me to dress the part of a rock ‘n’ roll concertgoer; picking out an appropriate outfit was part of the fun. I probably would have worn motorcycle boots, black jeans and a T-shirt, but my boots were in bad need of re-heeling, and all of my once-favorite jeans are worn to shreds, not replaced because current fashion has made it impossible to find replacement pairs that do not make me look like an anorexic 19-year-old boy in art school.

It was already about 10pm when we got to the club. The place was only a third full, if that, and just as I steeled myself for prolonged waiting, Swervedriver took the stage and began playing “Sandblasted.”

Everybody paid attention, and most of us cheered, but I wondered where the energy was. The band played fine, tight—uptight, maybe. It was like a sightseeing tour of Swervedriver’s best-loved songs. I felt stiff, detached and inhibited. Why weren’t there more people at the show? And why weren’t those of us there going absolutely bat-shit?

But eventually the band loosened up, as did the crowd, and I was happy to be there, even if they didn’t completely blow my mind. Swervedriver left the stage well before midnight, and I wondered if any of them perhaps had kids back in England that they couldn’t wait to call.

This was not a stab at stardom, but a celebration of how music can—or did—make us feel. Not even slacks or clogs can totally keep it away.