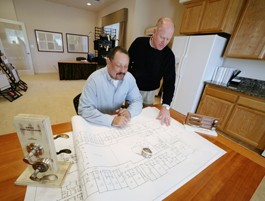 Headaches on the Hill

We have been panting, waiting!” says Jeanne DeJoseph, who is renovating and readying her house in San Mateo to put on the market. “We are so ready to move!”

DeJoseph, 64, and her partner, Suzanne Dibble, 61, have been together for 24 years. This September, they will be legally married in the state of California. Both are professor emerita at UCSF, and for the past three years have been at the top of the waiting list for the Fountaingrove Lodge, a unique upscale gay and lesbian retirement community still to be built in Santa Rosa.

Aegis Senior Living, the Santa Rosa&–based development company behind the recently opened upscale Varenna retirement community in Fountaingrove, has built over 32 retirement communities on the West Coast. But they haven’t broke ground yet for the Fountaingrove Lodge. Although over 50 percent of the Lodge’s planned units have been reserved by eager retirees since 2005, the development remains at the center of a long and bitter battle between neighbors, city planners and developers—a battle that keeps DeJoseph and Dibble on hold in San Mateo.

When built, the Lodge will be the only LGBT retirement community of its kind in the country. Its full spectrum amenities and on-site healthcare will be similar to Varenna’s, as will its high price tag (initial buy-in fees for the units top out at $1 million&–plus, with an additional monthly payment of about $3,000). The key difference is that it will be specifically geared toward the gay and lesbian community.

That’s good news for DeJoseph, who met the sad facts of old age when she placed her own mother in a retirement community. “Just sort of in passing, I asked the folks there what it would be like—could we be part of that facility?” she says. “And they said no, that only people who were connected by blood or marriage could live together. That’s still true there today.”

Aegis marketing director Wes Winter says that because of its unique scope, the Lodge concept has taken on life as a de facto core for Sonoma County’s aging LGBT community. “There are organizations regarding different healthcare initiatives like HIV,” he says, “and there are great youth service organizations like Positive Images, but there’s nothing, really, for adults, folks in their middle and senior years.”

Also because of its unique scope, the gay and lesbian factor remains an issue in the project’s planning. “Early on, there were some things that were said that were uncomfortable to hear,” Winter says. “Since that time, the conversation has obviously become more sophisticated. And so it’s sort of hard to weed out what’s based on perhaps a homophobic response and what’s based on something else.”

Aegis partner Bill Mabry cites the disparity between the neighborhood’s response to Varenna, the larger and more widely visible 29-acre Aegis project just up the hill, and its sudden involvement in the Lodge project. For Varenna, Mabry says, “we didn’t have anything from the homeowners association but positive response.” When the smaller, 10-acre Lodge was announced, he says, opposition suddenly arose, even for a temporary model unit to be built near the Lodge site.

Skip Epperly, president of the Fountaingrove Ranch Master Association (FRMA), says that the claims of homophobia are outrageous and untrue. “I can tell you where that came from,” he says. “I got a call from Jennifer Onley about two years ago from Channel 7 in San Francisco. She’s a reporter. And Wes Winter, who’s their marketing rep, called Jennifer and said, ‘Jennifer, these folks in Fountaingrove are a bunch of homophobic people, and they are opposing our project for homophobic reasons.’ At that point, I went ballistic. There must be any number of gay couples that live up here. Several of the residents who are our friends are gay and lesbian friends. Wes Winter is where that came from. It’s no secret.”

Epperly charges that Winter fabricated statements made by neighbors, denies that any name-calling or inflammatory remarks were made at meetings, and says he’s seen no actual homophobia among Fountaingrove residents toward the Lodge at all. “That was a mean-spirited, untrue campaign on Wes’ part to get a toehold—sympathy, I don’t know what,” he says, “and it didn’t work.”

As for not originally opposing Varenna, Epperly says at this point the FRMA only has itself to blame. Varenna’s retaining walls and multistory design are clearly a problem for Epperly. “The prior board of directors for the homeowners association chose not to get involved in the [design] review,” he says. “It was a big mistake. It was a big mistake. A big mistake. Did I say big mistake? Big mistake.”

Much of Aegis’ irritation with the FRMA stems from concerns which prompted the city council, in August 2006, to request an environmental impact report on the Lodge site. (Though Varenna required an EIR, Aegis did not anticipate needing one for the smaller, flatter, less-visible Lodge.) The EIR and its 20-month waiting period have cost Aegis over $1 million, estimates Winter, although Epperly, who had a 29-year career with Contra Costa County Public Works before moving to Fountaingrove in 2004, claims that’s a normal figure. (“Look at the scope of the project. Look at the value of this project. What is it, a $37 million&–plus project? And what’s an environmental review cost? It’s a speck!”)

Earlier this month, the long-awaited EIR came back for review, and even Epperly admits that it fits within the land-use criteria the city had. However, he points to the design review as another step entirely. Epperly is unsure at this point what the FRMA’s comments will be at the upcoming July 24 planning meeting, nor can he specify any of the association’s potential concerns before the design review board. “We haven’t formulated them into ink yet,” he says.

“We’re certainly concerned that the city looks at the Lodge project with a little more consideration of how this community feels it’s a fit,” Epperly says. “We’re looking for a balance. We’re looking for something that fits.”

Epperly does not state which other types of residences he would rather see built on the Lodge site. He further denies speculation that the FRMA wants the Lodge to be built smaller or that it should be set back farther from the road or that the site should remain undeveloped.

One thing Epperly remains firm about, however, is refuting accusations that Fountaingrove residents are in any way homophobic. “It’s an untruism, and it’s an insult,” he says. “It’s an insult to our intelligence, and I would say that the people up here are an intelligent group of people. And when we got blindsided by Wes Winter’s gay/lesbian tactic, we were shocked. And then we were mad. I’m not happy with Wes.”

For his part, Winter asserts that ABC News initially contacted him about alleged homophobic response to the Lodge, and that he never fabricated any statements. “That’s simply not true,” he says. “We had heard actual comments that were made by Fountaingrove homeowners that we were trying to turn it into the ‘Swish Alps’—just silly statements that were definitely homophobic remarks.

“Ultimately, when they didn’t fight Varenna—when there was no problem with Varenna—why are they fighting the Lodge now? The Lodge has less impact, it’s smaller, it’s less visible to the community. What’s the real difference between Varenna and the Lodge?” Winter asks rhetorically. “The only one that we can come up with—and this is not just me, this is the company—is the nature of who the residents are.”

In the middle of all this is the city. “In the beginning of the project,” says Santa Rosa acting mayor John Sawyer,  who is himself openly gay, “when it was first known by the public that this was going to be a retirement community marketed to the gay community, there were some of what I would characterize as unfortunate remarks. But in my opinion, it was a very small minority who voiced those concerns.”

Sawyer says that among the city council, he has seen “nothing but support” for the Lodge, but adds that waiting is simply part of the process.

“With most municipalities in California,” he says, “at least in areas where the property values are high, these projects take a lot of time.”