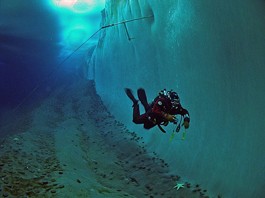 After a career full of odd films, Werner Herzog made one of his oddest with The Wild Blue Yonder (2005), in which Brad Dourif plays an alien who speaks directly to the camera. Surrounding Dourif’s bizarre monologues/rants about aliens and humans, Herzog alternated between footage of astronauts aboard a NASA shuttle and footage shot beneath the Antarctic ice shelf; the latter was meant to represent the alien’s home planet.

The film, as tedious as it was daring, was barely released. On the upside, it inspired Herzog to make a new documentary, Encounters at the End of the World, another triumph in a string of astounding, highly personal nonfiction works that includes Grizzly Manand The White Diamond. The underwater world of unbelievable creatures, shapes and displays of light apparently continued to fascinate Herzog well after the completion of The Wild Blue Yonder, and so he journeyed to the earth’s southernmost point to learn more.

At the start of Encounters, Herzog arrives at Antarctica’s McMurdo Station, the headquarters of the National Science Foundation, where some 1,100 people live on top of the massive, groaning ice chunks. He interviews some locals, described as “full-time travelers and part-time workers.” But Herzog is as disappointed as he is enchanted, and he allows these conflicting emotions to comfortably mix throughout the film.

Herzog describes McMurdo as an “ugly mining town,” filled with tractors and black, muddy tire tracks. He’s even more repulsed by the idea of a remote yoga studio (he calls it an “abomination”). He devotes some time to the legendary Antarctic explorer Ernest Shackleton, whose adventures in that pristine land make our modern-day nomads look lazy.

Nevertheless, Herzog dutifully interviews several scientists to get details about things like shifting ice, neutrinos and volcanoes. But he also follows his instincts and lets his curiosity lead him to the next sequence. Other times, he becomes enthralled by minor, almost incidental characters, such as a plumber (David R. Pacheco Jr.) who shows proof of his royal Aztec/Incan lineage with his odd-shaped fingers (his first and fourth fingers and second and third fingers are exactly the same length).

When talking to an antisocial penguin scientist, Herzog’s interview stalls, and so he begins asking increasingly absurd questions (“Are there gay penguins?”). He eventually becomes more fascinated by a single penguin that strays off from its course and begins wandering alone toward the mountains—and toward an almost certain death. Herzog adds some poetic narration, wondering about the penguin’s lonely, perhaps pointless journey.

Encounters at the End of the World does contain a few facts about Antarctica, and most viewers will walk away smarter than they were before, but it’s also a kind of rambling, exploratory mess, alternately curious and fastidious. That’s why our lonely penguin gets more love than all the scientists and all their facts: the film is really more about Herzog than Antarctica. Far too many PBS-style documentaries claim to be journalistically accurate on subjects like this, and so when Herzog blatantly scraps objectivity, it comes across as refreshing as an icy breeze.