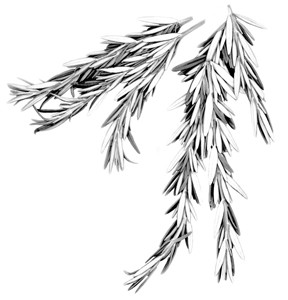 There’s no need to pine for plentiful rosemary

Dear Neighbors: I owe all of you an apology–but not really. Though first I must explain that if you have spotted a shadowy figure of limited stealth darting around the fringes of your yard with a pair of scissors at dusk, it was probably me, violating your rosemary bush.

It’s simply impossible to resort to buying rosemary at the grocery store, since it’s much more logical to steal a sprig or two from you. Buying rosemary makes about as much sense as investing in pet rocks when you’ve got a gravel driveway. Though my residence is the only house on the block that has not incorporated rosemary as a landscaping element, I do intend to rectify this situation. But in the meantime I shall continue to rape the locks of your shrubs’ plumage.

In your yards you will find two general types of rosemary shrubs: upright and prostrate. The upright has longer, spindlier leaves, straighter stems, and takes well to being shaped into whimsical topiary forms. The prostrate type’s leaves are shorter and stubbier, so this type is best suited for herb pots, edging, and rock gardens. You find both types in abundance in yards throughout Northern California–and, yes, our block. Pruning helps to keep rosemary young and shapely, so my thieving actions are in reality quite helpful to you.

A recent visit to my parents’ home in Ohio clarified our fortunate situation here in California. Despite all efforts, my mother’s rosemary refuses to grow into anything beyond a few anemic sprigs, and she can’t toss the stuff around as casually as we can in its many applications, culinary and otherwise.

Hearty rosemary thrives in cool climates tempered with salty winds from the sea. The rocky coasts of France and Spain were originally home to rosemary. Pliny the Elder gave the herb the name rosmarinus, which means “sea dew.”

Rosemary’s potency will impart a lingering perfume, clinging and sticky, upon the fingers after even the slightest brush. Perhaps this is why the herb has, for ages, been equated with strengthening memory. This attribute has made it an emblem of lovers and fidelity, giving it strong symbolic ties to wedding ceremonies.

During the dark and smelly Middle Ages, rosemary’s pungency was called upon for all sorts of household freshening. Clothes and bed linens were stored in chests filled with rosemary sprigs, and it was said that bedding on rosemary-scented sheets would rid sleepers of evil dreams. Branches were strewn on floors to release their fragrance when trod upon. Even today, rosemary branches placed under doormats will omit welcome doses of low-tech freshness highly preferable to a Glade Plug-In.

There’s a charming legend of the Virgin Mary which claims that while resting on the flight from Egypt, she draped her cloak over a white-flowered bush of rosemary, and for ever after its flowers were as blue as her robe. Another legend likens the growth of a rosemary shrub to that of Jesus, and states that after 33 years, it increases in breadth but never in height.

With the exception of landscaping, we now most commonly see rosemary employed in the kitchen. Very liberal use of the herb most often will not pay off, as rosemary can be a stage hog if you let it, spoiling all the other ingredients’ fun. There’s also a texture issue: Rosemary’s spiny, stiff leaves have a penchant for cramming themselves between your teeth.

There are a few ways to harness the flavor of rosemary and get around the unsightly smile problem. One is to tie the rosemary in cheesecloth to simmer in soups and stews (you could just throw a whole sprig in there, naked, but the leaves will most likely fall off the stem).

Another method is to infuse your cooking oil with rosemary just prior to sautéing or roasting. Over medium heat, allow the herbs to steep in the oil until they are fragrant and dark, but not black. I especially enjoy this technique for flavoring puréed white-bean dips, because the rosemary leaves can make them look oddly speckled.

Rosemary’s piny heft pairs well with meats like beef or pork but especially chicken, and in particular roasted chicken. All you need to do is stuff the cavity liberally with rosemary sprigs and roast away, maybe scattering some roughly chopped rosemary on the outside, too. To make a quick sauce for sautéed chicken, quickly simmer lemon juice, honey, and rosemary in the pan drippings.

Rosemary and lamb have long been a good pair. I like to make a highly seasoned green herb paste with basil, parsley, rosemary, olive oil, and a few cloves of garlic to smear all over a leg of lamb before roasting.

Recipes for bar nuts can get an unusual punch from the inclusion of roughly chopped rosemary, tossed in while the nuts are still warm from roasting. And olives, marinated with garlic and rosemary leaves, are also a real treat.

Rosemary, an herb with muscle, can stand up to the grill–kebabs, vegetables, whatever–and in many applications beyond rubs or marinades. Use the branches as brushes for basting the meat, and during the last moments of grilling, toss them over the coals for a fragrant burst of smoke. Woodier branches of upright rosemary can, when stripped of their leaves, even be used as skewers for shrimp, vegetables, or fruits (pineapple and grapes work well).

So use all you want. Heap branches upon the grill, shear off piles of the sticky, piny leaves for all sorts of uses culinary, medicinal, and decorative. There’s plenty to go around.

The idea for this comes from Nancy Silverton’s Breads from the La Brea Bakery. Make your favorite focaccia dough, shaping and proofing as you usually do (I hope this involves a good brushing of olive oil). Just before sliding the focaccia into the oven, push red grapes into the surface of the dough. Use as many as you like; the more you use, the more of a pretty polka-dot effect you’ll get. Sprinkle with sea salt and roughly chopped rosemary. Bake and eat for a nice breakfast or lunch, preferably with goat cheese.

There’s no need to give a recipe for these, really–just a loose method. The glory of rosemary potatoes results no so much from following precise measurements as it does from affectionate adherence to a short list of steps. These potatoes, eaten out of hand warm or at room temperature, will leave a slick of salty grease on your fingers, easily beating out potato chips for decadent snacking when no one is looking. That is why I prefer to use smaller potatoes, which make better finger foods.

Heat the oven to about 425 degrees. Rinse off and pat dry 5 to 8 smallish skin-on new potatoes or fingerling potatoes (I prefer the buttery roundness of the former). Don’t use russets, whose interiors will be too cottony and not creamy enough. Across the length of each potato, make deep, crosswise incisions about 1/8 inch apart (the more incisions, the more yummy salt, oil, and herbs penetrate the potato). Use the handles of two wooden spoons or chopsticks as guides to keep from slicing all the way through the potato.

Place potatoes on a foil-lined baking sheet or roasting pan and drizzle each potato with a little olive oil (more, if you are bold in this manner, is preferable to less). Sprinkle generously with sea salt, freshly ground black pepper, and a smattering of chopped fresh rosemary. Massage the oil and seasonings affectionately into each potato for a few seconds.

Roast for 30 to 60 minutes. This is a very liberal time frame, but roasting time will depend on the size of the potatoes. You will know they are done when their skins are wrinkly, the oil sizzles, and the incisions yawn open and look like accordions. Give the potatoes a little roll or two in the excess oil during the cooking time to keep them nice and glossy.

Serve however. If you are roasting a rosemary chicken, you can cook the potatoes in the same oven (or the same pan, even) for an enduringly one-dimensional meal.