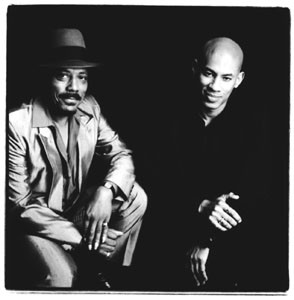 Randy Jacobs and the Boneshakers

Bred in the Bones: Sweet Pea Atkinson (left) and Randy Jacobs rock the R&B tip as the Boneshakers.

Randy Jacobs and the Boneshakers ready to rattle Sweetwater

OK, so Randy Jacobs and the Boneshakers aren’t a household name, but rest assured that this hard-rockin’ R&B band’s upcoming show at Sweetwater in Mill Valley probably will stand as a benchmark on the local club scene this year.

How good are these guys? Let’s just say that few musicians have the courage even to attempt to record an audacious cover of soul brother No. 1 James Brown’s “Cold Sweat.” Their version comes complete with visceral funk grooves and mind-numbing Hendrixesque guitar lines, all wrung through the funk filter to reshape this soul classic into something that is distinctly their own, as the Boneshakers did on their 1996 debut Book of Spells.

Sculpted initially around the creative core of guitarist Randy Jacobs and vocalist Sweet Pea Atkinson–both alumni of the eclectic pop band Was (Not Was)–the Boneshakers have consistently delivered a beguiling bitch’s brew of soul sorcery. Over the past couple of years, the Boneshakers have gone through a few personnel shakeups, with Atkinson at one point leaving, only to return for a guest spot on the recent Pouring Gasoline album, which also features Dave Immerglück of Counting Crows and organist Billy Preston.

No doubt about it, the band revolves around Jacobs. Or as the band’s website declares, “Randy Jacobs is the Boneshakers.” And that means this band rocks hard. For some, that’s almost unsettling because, hey, African Americans aren’t really supposed to play rock, right?

“I feel a lot of different times that people are almost shocked that I’m a rocker,” admits Jacobs, 40, during a phone interview. “I mean, the band is an R&B rock band–like the old Bar-Kays or Rick James or Prince. It’s a hard thing to pull off, and sometimes people almost have to see it to understand what it is.

“When they used to see Sweet Pea walk on stage in his hat and silk suits, they’d think, ‘Oh, Bobby ‘Blue’ Bland,’ but when you hear the music, it’s a lot more modern than that.”

You could say that rock is very much in Jacobs’, uh, bones. Growing up in Detroit, he started playing guitar at age 13. “I used to put my Fender super-reverb amp and Sears guitar in a little red wagon to go play around the corner,” he recalls with an infectious laugh that punctuates much of his conversation. “Older guys would stop me and ask, ‘Hey, can you really play that thing?’ And I’d set up and show them. That’s how I got a lot of my first gigs.”

It wasn’t long before he’d left those childish pursuits behind. In the early ’70s, the Motor City was fertile musical ground, ranging from the gonzo guitar rock of protoheadbanger Ted Nugent to the rockin’ soul of singer Mitch Ryder. “It was fairly diverse,” says Jacobs, whose stinging guitar licks signify his Detroit roots. “When you played at a fraternity or a sorority on one of the local campuses, you’d play ‘In-A-Gadda-Da-Vida’ by Iron Butterfly, but then you might also play ‘Chocolate Buttermilk’ by Kool and the Gang.”

It wasn’t long before Jacobs earned a reputation as an ace session guitarist. Unfortunately, that led to some fairly forgettable gigs. For instance, he backed Detroit boxer Tommy Hearns on a dreadful take of Queen’s “We Are the Champions” (Hearns lost to champ Sugar Ray Leonard). It did, however, spark a burning desire in Jacobs to front his own band.

In 1981 he met Atkinson when they both began recording with Don Fagenson and David Weiss, the studio wizards behind Was (Not Was). “We hit it off right away,” Jacobs says of Atkinson. “I think we just shared musical tastes and styles.”

During his tenure with Was (Not Was), Jacobs honed his songwriting talents, co-writing the band’s only Top 10 hit, 1987’s novelty tune “Walk the Dinosaur,” a playful dance song that started out as a lament about Armageddon.

Four years later, the band split up. Atkinson and the other Was (Not Was) singers inked a deal with Fagenson’s MCA-distributed label. Jacobs joined John Butcher’s Axis and toured with Australian rocker Paul Kelley. “I learned a lot from Paul, and that made me all the more want a band of my own,” he says, “because I had spent too much time just collecting a paycheck.”

He returned to the States and backed everyone from rapper Coolio to pop star Elton John, and from punker Iggy Pop to Yemenite dancehall queen Ofra Haza. In 1995, Jacobs and Atkinson reunited, blending groove-heavy R&B and hard-rock riffs. The next year, Fagenson–who has produced acclaimed albums for Bonnie Raitt, Bob Dylan, and Willie Nelson–left to produce the Rolling Stones, leaving his home studio to Jacobs and Atkinson to work on Book of Spells. The Boneshakers followed up with three more great cult albums.

For Jacobs, the Boneshakers are a dream come true. “This is a great band,” he enthuses. “Sometimes when we’re playing, I just get chills because it’s so funky and it’s so hard.”