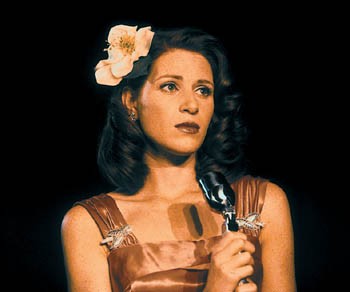 Strike a Chord: Isabel Rose, as Billie in ‘Anything but Love,’ finds someone to share her music with.

Music Is the Message

It’s hard not to get excited about film–just look at the opening weekend numbers for a film like Charlie’s Angels: Full Throttle. A full $37 million worth of excited fans found refuge in the film’s mindless blather on the first weekend alone (and even that was a disappointing number for the studio). But though that’s often the caliber of summer film offerings–big money, little thought–that’s not the excitement I’m talking about.

For Steve Ashton, founder and artistic director of the Wine Country Film Festival, summer has nothing to do with mindless blockbusters, but everything to do with excitement.To Ashton, along with wife Justine and a horde of volunteers, summer means the culmination of a lot of work, putting the final touches on the almost month-long film festival that brings a bevy of thought-provoking cinema to Sonoma and Napa starting July 17.

While the festival focuses each year on “films from commitment,” meaning films that focus on social and political issues, Ashton and his team have managed to tweak that theme slightly each year, offering a slew of cinematic delights that leapfrog boundaries. For this, the 17th annual festival, the idea that music can expand cultural and social boundaries, as well as tear them down, has spawned one of the festival’s themes: music in film.

It’s a generic term, “music in film,” and Ashton and company have interpreted it liberally. From a panel discussion with David Robbins, brother of Tim and music man behind the films Dead Man Walking, Bob Roberts, and more, to a documentary about quirky indie rockers They Might Be Giants, to a charming independent film about a lounge singer finding her music, the offerings projected out over Sequoia Grove and Kunde Estate vineyards, as well as film-fest fave the Sebastiani Theatre, tickle the ivories in various ways.

Even the festival’s closing-night film, The King Is Dancing, which is seeing its stateside premiere at the festival, puts music at the forefront. Director Gérard Corbiau calls music “one of the main characters of the narrative.” The film is about the young Louis XIV and his relationship with the composer Lully, whose music enchanted the future Sun King.

Ashton looks to the philosophical underpinnings of the era, the beginning of the Age of Enlightenment, to extract a context for the idea of music’s link to film. “Music,” he says, “was not considered to be an art.” In fact, though the art of music is hard to deny, 17th and 18th-century philosophers still considered music to be a science. “It was designed to have an objective effort on the listener,” notes Ashton. “There was the concept that we could engineer people’s feelings, that there was a direct connection to the soul through music.”

And that right there is the very heart of the matter. That music is an art seems a nobrainer, and the strict delineation between art and science being a thing of the past, the idea that music strikes at the soul–even manipulates feelings–is a concept familiar to adolescent *NSYNC fans and Beethoven lovers alike.

Gigantic (A Story of Two Johns) will be soulstriking to a certain segment of the population that came of age in the ’80s and ’90s. Short on the sort of social commentary found in spades elsewhere in the Wine County Film Festival, the documentary about the band They Might Be Giants (which opens with former senator and avatar of nerd-cool Paul Simon comparing the boys from Lincoln, Mass., to Abraham Lincoln) serves mostly to map the career of one of the longest-lasting (platonic) couplings in rock. As the strains of the iconic “Birdhouse in Your Soul” ply the eardrums, it’s hard to resist that time-travel feeling, back to when “alternative” was new, before grunge and before MTV was co-opted by major-label tastemakers.

The film enlists the help of intellectual hipsters like Sarah Vowell, Dave Eggers, and Ira Glass to deconstruct the band composed of John Flansburgh and John Linnell, from their modest beginnings at East Village performance art shows to their 1990 major label debut, Flood (which, in case you need reminding, inaddition to “Birdhouse,” also contains the songs–nay, cultural touchstones–“Istanbul (Not Constantinople)” and “Particle Man”). Amid record-label trauma and general maturing (i.e., baby making), the boys haveevolved into überhip rock icons, in recent years composing music for the journal McSweeney’s, the film Austin Powers, and the theme to the TV show Malcolm in the Middle.

Coming at music from an entirely different angle (a fictional one, to start), Anything but Love is similarly charming and heartstring-plucking. Taking both overt and subtle cues from classic romances of the ’50s, the film follows Billie (Isabel Rose), a beautiful, underappreciated cabaret singer who, according to her mother, lives her life “like she’s in a technicolor dream.”

Billie starts dating a man she knows from high school (where, in their production of Guys and Dolls, she was just a chorus girl and he was Sky Masterson), who is now a rich lawyer. The classic love triangle is complete when the scruffy, gruff man who sabotaged one of Billie’s auditions (the long-missing Andrew McCarthy) becomes her piano teacher.

The little touches are perfect. Billie dresses like a latter-day Audrey Hepburn; the lawyer boyfriend just doesn’t appreciate her style. She does things like kicking up her heels and doing little dancer swirls when she’s happy, and while the overall effect could easily come off as terribly sentimental, it’s all so sweet– including Eartha Kitt’s life-changing advice to choose the man who “hears the same music”–that one can’t help but be drawn in. And Rose’s performance (she also co-wrote) is pitchperfect, in her singing as well as her acting.

Other festival offerings that fall into the music-in-film category move more toward the social commentary direction, or at the very least toward expanding borders. Los Zafiros: Music from the Edge of Time aims its lens at postrevolutionary Cuba, where the doo-wop quintet Los Zafiros swept the nation, second only in popularity to the Beatles.

The film is no Buena Vista Social Club, primarily because it’s so sad; three of the members are dead, and although the remaining two have fond memories, the pain and divisiveness caused by the Castro revolution–and the self-destructive behavior of some of the band members–is a shroud hanging over the documentary.

Footage of the group performing is delightful. They resemble the Platters in their mannerism and style–classic ’50s synchronized dance steps and crooning vocals, with a distinct Cuban sensibility. That’s what gets to you about these guys–their swiveling salsa hips and quirky vocals, combining R&B with bossa nova and calypso beats. It’s a formula that should have worked wonders in the States, but the band remains obscure outside Spanish speaking populations.

The film festival’s Latino music sub-theme continues with Queen of the Gypsies, a marvelous film about Carmen Amaya, the woman who popularized flamenco outside Spain and brought the dance into the 20th century.

Amaya was born in a Barcelona barrio and grew up in abject poverty, dancing for pennies with her father. Her impoverished beginnings seem ripe for a deeper look, yet the documentary is more of an overview of her life and influence. Her fame grew in Spain, and when the Spanish Civil War started, she fled to South America and then the United States. She performed at Carnegie Hall and the White House, and played stereotypical Gypsies in films like Knickerbocker Holiday (1944) and Los Tarantos (1963), her last and most well-known role. She died in 1963.

Amaya’s revolution in dance was in appropriating the previously male role of tapping out the rhythm with the feet. The furious heel-stomping of modern flamenco dancers both female and male is now familiar, but it was Amaya who paved the way, as it were, for the modern style.

The film captures her determination–she never stopped dancing, never stopped supporting her extended family–and the adoration of her friends and family. It also captures her passion, through extensive footage of her performances, which sometimes are so frenzied they appear to be sped up.

Were Amaya still alive, a deeper look into her psychology would be fascinating; her story in the film is told entirely through interviews with family, friends, and experts, and one wonders what lies beyond the hero worship. But as a document of one woman’s love of flamenco and tireless talent, the film stands strong.

Steve Ashton notes that “flamenco has the earthiness of the blues–it’s very tied to the American blues–in its form and folk art,” pointing out that, like film, music and dance tell stories. The story told in PeaceJam, though not specifically about music or the Columbine tragedy, tells of both. PeaceJam is an education program which organizes retreats that put kids together with Nobel Peace Prize laureates in an attempt to spread the skills and wisdom of peacemakers.

Richard Castaldo, who survived the Columbine shooting (familiar to viewers of Bowling for Columbine as the wheelchair-bound boy who joins Michael Moore in a successful plea to stop Kmart from selling ammunition), is active in PeaceJam and used what he calls “whatever fame [he] has” to gather supplies for war-torn East Timor.

Castaldo, too, uses music to express himself. He is shown playing the keyboard in the film, and he wrote three songs for the film’s soundtrack. He will be in attendance at the film’s screening (Aug. 8 at Kunde Estate Winery) and has agreed to perform.

We’ve come a long way since Louis XIV’s era, when music was denied its status as an art. From the characters–real and imagined–in the Wine Country Film Festival’s “music in film”series, there is little doubt that it flourishes as art, while retaining the sociological and anthropological qualities of science. As Ashton says of The King Is Dancing, “The philosophy and attitude about music [in the film], the direct connection to the human self, is similar to the way film music can be considered. . . Great film music takes you into the film.”

Ashton goes on to say that “we see [music] as an enhancer of the cinematic experience. . . and in some cases, music is the subject matter. It’s a bridge to a deeper understanding of the other arts.” It’s also a bridge to a deeper understanding of what it is to be human–which is, in a wide sense, one of the particular beauties of the Wine Country Film Festival.