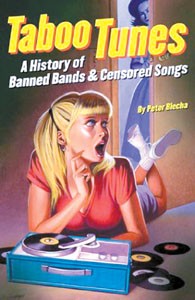 We Don’t Need No Thought Control: Leave your kids alone.

Say what you want about Albert Goldman– the Kitty Kelley of rock writers–but his cutting, no-holds-barred biographies of such rock icons as Elvis Presley and John Lennon put the false images of our heroes under the full glare of the sun. In true Hollywood Babylon-style–and unlike Greil Marcus, who could find a fathomless ocean of mystery in every note Robbie Robertson ever played–Goldman plowed fearlessly through the sordid backwater of sex, drugs and rock ‘n’ roll, earning enemies but making for great summer reading.

Goldman himself even pops up in one account, in which Morrison, clad in skin-tight leather pants, allegedly produced an erection while being interviewed by the critic. Accord-ing to British press reports, lawyers excised a sado-masochistic affair between the Lizard King and a major Hollywood star.

For the most part, you’ll have to settle for stories about Morrison copping blow jobs from Velvet Underground chanteuse Nico in the bathroom at Andy Warhol’s Factory (Morrison declined a role in Warhol’s avant-garde skin flick Fuck); the FBI’s lengthy surveillance of the singer; and the drunken exploits preceding his 1971 death in Paris.

Sex, drugs and rock ‘n’ roll also take center stage in Taboo Tunes: A History of Banned Bands and Censored Songs (Backbeat; $17.95), in which author Peter Blecha casts a fresh eye on the travails of musicians–Billie Holiday, Woody Guthrie, Frank Zappa, Nirvana, 2 Live Crew, the Beatles, the Sex Pistols, et al.–who have come under fire over the years for challenging the mores of their times with provocative lyrics. If you can get past the tirades, Taboo Tunes reads like an essential primer for a Culture Wars 101 course. Blecha comes across as a bit naive at times but does a good job of exposing the morality police as they continue their self-righteous attacks.

“It always amazes me how these God-fearing freedom fighters are so ready to spit on the First Amendment every time they see the bogeyman,” shock-rocker Rob Zombie tells Blecha.

Meanwhile, Rob Jovanovic’s Perfect Sound Forever: The Story of Pavement (Justin, Charles and Co.; $19.99), sporting a pleasingly upscale fanzine design, takes a reverential approach to its subject. Jovanovic, a British writer and frequent contributor to Mojo and Record Collector, tumbles head over heels as he tells the tale of the pioneering Stockton, Calif., indie-rock band that was one of the most influential acts of the ’90s.

To his credit, Jovanovic serves as an informed literary tour guide, taking the reader backstage as the rock scene is transformed in the post-punk maelstrom by such innovative bands of the times as Pavement, Sonic Youth and Nirvana.

But the mother of all new music biographies has to be Ramblin’ Man: The Life and Times of Woody Guthrie (Norton; $29.95) by Ed Cray. Best known for his earlier portraits of such nonmusical historical figures as Gen. George C. Marshall and former Chief Justice Earl Warren, Cray gained access to a treasure trove of unpublished letters, diaries and journals at the Woody Guthrie Foundation and Archives to create a compelling look of this legendary champion of the underdog.

Cray never goes for the jugular, à la Goldman, but he makes it clear that Guthrie wasn’t exactly the consummate family man. Guthrie’s second wife, Marjorie, emerges as the real hero of this story for her willingness to stand by her man so that the rest of us could reap the fruits of his Dust Bowl-era genius.

Meanwhile, look for Bonnie Marson’s quirky novel Sleeping with Schubert (Random House; $21.95) to become a real summer sleeper. This fast read describes a female pianist who becomes a musical genius after she is possessed, literally, by the spirit of the late-19th-century Viennese composer Franz Schubert, who is hell-bent on completing his famous Unfinished Symphony. Light and breezy, Marson fills this charming book with witty observations about growing up, struggling with bad hair and just trying to get by. The newly released companion CD, Sleeping with Schubert (Sony Classical), will put you right in touch with the great man himself.