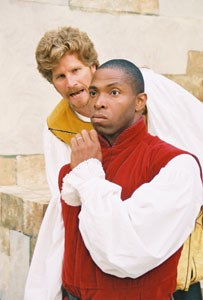 ‘Othello’ and ‘She Stoops to Conquer’

Othello, which will be celebrating its 400th anniversary this November, is without a doubt one of Shakespeare’s best and most important plays. In the famous tale of forbidden love and newlywed bliss gone very, very bad, Othello is a black mercenary soldier living in Venice who falls for Desdemona, a beautiful white woman, and marries her. But when driven to a jealous rage by another soldier’s false reports of his bride’s infidelity–exacerbated by Othello’s socially reinforced suspicion that his blackness makes him unlovable–he has a breakdown, kills Desdemona and finally himself.

It’s no surprise that in most modern productions of Othello, all of this is played very, uh, sensitively. The play is a tragedy, after all, and like Shakespeare’s Merchant of Venice and Taming of the Shrew, is packed with material that, while vividly representative of the social attitudes that existed when it was written, could easily be seen as just plain offensive, to today’s audiences. As a result, many directors work so hard to de-emphasize the tricky stuff while highlighting the “important” parts of the play–the poetry, the passion, the sweet and tragic beauty of it all–that they end up with a show that is cautious, denuded and boring.

Talk about a tragedy.

In director Cynthia White’s new production of Othello, one of two shows that opened the 2004 Marin Shakespeare Festival in San Rafael, the issue are presented sensitively enough, with a first-class Othello played by a mesmerizing Aldo Billingslea. But this is a production that embraces Othello for what the Bard most likely intended it to be: a grand, slightly dirty soap opera, and a white-knuckle thriller packed with enough lies, heartless plots, accusations of infidelity and incidents of spousal abuse to thrill the very heart of Jerry Springer. It’s Shakespeare meets the Young and the Restless, and it’s the most entertaining production of Othello you are likely to see.

Jennifer LeBlanc, as Desdemona, maintains the necessary amount of believable virtue but also imbues her with just a hint of fresh, eager sexual enthusiasm, enough to give a veneer of possibility to Othello’s rising suspicions. Those suspicions, as everyone knows who’s seen other productions, are created by the machinations of the evil Iago, Othello’s ambitious third-in-command. This Iago, energetically portrayed by Paul Sulzman, is convincing as a charming sociopath whom nobody should trust and yet everyone does. His oily manipulations of Othello are astonishingly masterful; we can see why everyone keeps saying that Iago is an honest man.

At the heart of any production of Othello, of course, is the love between Desdemona and the Moor of Venice. This one works. Billingslea and LeBlanc are convincingly crazy about each other, even after Othello finally goes crazy.

It is another flavor of insanity entirely that runs the show in the delightfully staged She Stoops to Conquer. In Oliver Goldsmith’s 1771 farce, young Mr. Marlowe, a rich gentleman, is on his way to meet the Hardcastles, the family of the woman his father wants him to marry, none of whom he has never met. For complicated reasons related to the crass tomfoolery of one Tony Lumpkin (Jonathan Gonzalez), Marlowe is tricked into believing he is lost, that the Hardcastle’s house is an inn and that his would-be parents-in-law (the hilarious Phoebe Moyer and George Maguire) are the innkeepers. To say he is rude to them is an understatement. But that’s not the worst of his problems.

Poor Mr. Marlowe (a foppish Darren Bridgett), though charming and witty around barmaids and serving women, becomes a stammering idiot around females of his own social class. When he first meets his intended, the beautiful Miss Kate Hardcastle (Deborah Fink), he is so flummoxed he can’t bear to look her in the face. Later, when he bumps into her after she’s donned more casual attire, he mistakes her for the cleaning woman and falls instantly in love. It’s ridiculous, yes, but it’s extremely well-done, and quite funny.

Too bad Othello didn’t have a Tony Lumpkin on board. Things might have turned out better if he had.