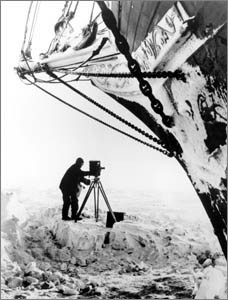 CLASSIC FILMS are getting harder and harder to find on the big screen as the revival theaters shut their doors. But is there a ray of hope on the horizon? Writing about the Hollywood screenwriters’ strike, the possibility of which has already put Batman V and The Wild Wild West II on hold, one reporter speculated in Entertainment Weekly that movie theater owners might be forced to fill up the theaters with nothing but foreign films and revivals.

Terrifying possibility, isn’t it?, I ask Denis Doros of Milestone Film & Video, a distributor of independent, silent, and foreign films.

“The strike is an example of how the film business treats everybody,” Doros says, speaking by phone from the company’s Manhattan office.

“Knowing how the writers are treated, you tend to support the writers,” he continues. “I doubt if the theaters will be filled with revivals. Even today, there are so few places you can go now to see the classics. The Castro Theater and the Sonoma Film Institute are among the few that are left. It’s a bad time for rep houses; the prints are bad, the seats are broken. The only survivors are the professionals.”

As the rep theaters closed, Milestone filled the gap with home video and DVD, along with programming for film festivals. Now the company is celebrating its 10th anniversary with a mini-fest of its films at the Sonoma Film Institute at Sonoma State University.

The films in the series include two from 1975: Chac: The Rain God (screening Oct. 6 and 7), restored from too-purple Eastmancolor by Milestone (“restored by hand–digital is for the big boys,” says Doros); and Winstanley (Oct. 20 and 21), the noted silent-film scholar Kevin Brownlow’s feature film about the original Diggers, farmers who seized land from the landlords in 1649.

Particularly memorable are two films about the fury of the ocean: the remarkable 1916 Antarctic documentary South (Oct. 13 and 14) and Michael Powell’s terrific 1937 drama Edge of the World (Oct. 27 and 28).

Edge of the World is a compassionate but unsentimental look at Shetland Islanders, as homely, sturdy, and appealing as the stone crofts they live in. Even here you can see the mystical elements that surfaced later in Powell’s The Red Shoes (1948) and Black Narcissus (1947) in the double-exposed figure of the departing villagers, who linger like ghosts as the story is told. Fishing trawlers have cleaned out the ocean, leaving bad harvests and fewer young men to do the work.

Just as Edge of the World makes the waves and cliffs of the island of Foula ominous and ravishing, South–probably the first film made in Antarctica–brings in the deadly beauty of the ice. The 1914 voyage of the Endurance, commanded by Sir Ernest Shackleton, was both success and catastrophe. Shackleton lost his ship and yet returned the entire crew alive.

Milestone’s co-founders, Denis Doros and Amy Heller, came into independent film distribution from two other companies specializing in revival and foreign films. “I was at Kino,” Doros says. “My partner, Amy, was at New Yorker films. We both thought we were smart enough to run our own business. We were wrong. The film business is an oxymoron.”

Despite this gloomy prognosis, heard whenever you talk to those who own their own record business or art gallery, Doros and Heller have an impressive catalog of films, a treasure trove for those burned by Blockbuster.

HERE ARE several films by the silent era’s Mary Pickford, the first female cinema superstar. There’s Rouben Mamoulian’s 1936 musical The Gay Desperado, scored with Rodgers and Hart tunes and as full of irresistible South of the Border trinketry as a 50-year-old Mexican restaurant.

Of the many films Milestone offers, Doros is especially proud of having got Edge of the World back in front of an audience. Doros met the film’s director, Michael Powell, and his wife, Thelma Schoonmaker–editor of Raging Bull and most of Scorsese’s subsequent movies–when a retired Powell was on the film festival and university circuit. Eleanor Coppola brought Powell to the Sonoma Film Institute in the early ’80s.

“He had such a wonderful time,” Doros said. “These trips and award ceremonies meant so much to him.”

Powell managed to prove he did have the rights to Edge of the World, and when the film became available, Milestone sprang into action, working to get it back before the public.

“The day I acquired the rights, I called the British Film Institute and asked how quickly they could get a print,” Doros recalls. “The BFI printed up a new print from the nitrate negative in only two weeks for us. I’ve heard complaints about archives being doddering and unhelpful, but that’s not our experience.”

The 10-year career of Milestone, which made a niche for itself with an eclectic and yet exciting collection of films, shows that there’s a future for non-mall movies, as well as a past.