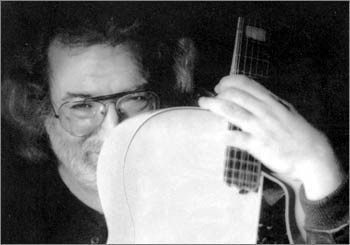 THERE’S a particularly poignant moment in Grateful Dawg–Gillian Grisman’s musical portrait of her mandolin-playing father, David, and his longtime collaborator, Jerry Garcia–in which Gillian’s little brother talks about how much he’ll miss Garcia, who died in 1996 of a heart attack. As the child chokes up at his loss of a good friend, the screen lights up with a shot of Garcia, not the sage rock icon who captivated millions with his freewheeling electric jams, but a good-natured, aging white-haired musician, puttering around Grisman’s makeshift living-room studio with his acoustic guitar and mumbling to himself about not wanting to forget a new lick he’s trying to work out.

Just a kindly old man with an obsession for bluegrass music.

It’s a very human moment that speaks volumes about the character of a man elevated as a deity by a legion of rabid fans who sought out Garcia as a mystical dream-weaver.

The film–chronicling some of the 44 bluegrass sessions shared by Grisman and Garcia–is one of several noteworthy music programs included in this year’s Mill Valley Film Festival, running Oct. 5-15.

Grateful Dawg–featuring unreleased audio tracks and rare concert footage–screens Friday, Oct. 13, at 7:30 p.m. at the Rafael Theater in San Rafael at a special showing that features a post-film concert by Grisman (tickets are $30); the film shows again, by itself, on Sunday, Oct. 15, at 9:30 p.m. at the Sequoia Theater in Mill Valley.

One of the most anticipated music documentaries of the year, Rhythm ‘n’ Bayous: A Road Map to Louisiana Music by Robert Mugge, will make its world premiere Thursday, Oct. 12, at 6:30 p.m. at the Sequoia Theater, and screens again Saturday, Oct. 14, at 9:30 p.m. at the Rafael Theater.

Known for his acclaimed work Deep Blues, which introduced the world to Mississippi bluesmen Junior Kimbrough and R. L. Burnside, and the Robert Johnson tribute Hellhounds on My Trail, Mugge has emerged as the foremost documentarian of American roots music. His latest offering samples a tasty jambalaya of simmering Southern sounds. It provides a tour through the state’s ebullient and diverse musical culture, from Cajun and zydeco to gospel and country, jazz and rockabilly to swamp pop and blues. During the filming, Mugge and his crew traveled to Shreveport (home of the legendary Louisiana Hay Ride), Monroe, Winnsboro, Baton Rouge, New Orleans, Lafayette, Ville Platt, and Eunice to capture such stars as rockabilly great Dale “Susie Q” Hawkins and relatively obscure local heroes like Henry Gray and the Hurricanes. In connection with the film, Hawkins performs two live shows Thursday, Oct. 12, at 7:30 and 9:45 p.m. at Sweetwater in Mill Valley. Concert tickets are $15.

Meanwhile, John Goddard, proprietor of the Village Music record store in Mill Valley, digs into his considerable archive of musical film footage for The Hi De Ho Show, an evening of rare clips from his personal video vault. This eclectic vehicle veers wildly from the hilarious to the outrageous, winding its way through decades of musical history. The footage runs the gamut from Al Jolson and Muddy Waters to the Clash and Hank Williams.