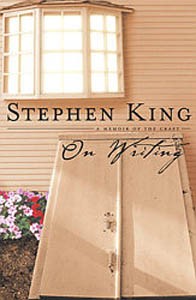 THE WORST-KEPT secret in publishing is that Stephen King’s On Writing: A Memoir of the Craft is as much a confessional autobiography as a guide for aspiring writers. The promise of the cellar door in the cover illustration is kept: King gets down and dirty with the tale of his addictions to booze and cocaine and the recovery that followed wife Tabitha’s tough intervention about 15 years ago.

The book hits the stores Oct. 3, but Simon & Schuster has already been sending excerpts to a free-for-the-asking fan e-mail list. Moreover, The New Yorker ran excerpts, Amazon.com has posted advance reviews from professionals and fans, and Advance Reading Copies have been offered for sale on Web auction sites (although, strictly speaking, ARCs are meant for reviewers only). Of course, given King’s recent history of Web publishing, nothing should surprise us.

Readers familiar with 12-step jargon figured out several books ago that the world’s richest writer had given up booze, recreational drugs, and cigarettes. We also had an idea, based on snippets of autobiography and a steadily increasing list of gutsy women characters overcoming daunting odds, that he had a pretty well-developed feminist consciousness. That’s confirmed, too, with his declarations that his mother–abandoned by their father when Stephen was 2 and his brother 4, and ever after a toiler in menial jobs–was his single biggest influence.

King won’t go so far as to say he’s a feminist, but he has called his writing about women “psychological cross-dressing in order to know the other” (On the Issues, Fall 1995).

Like most writers who write about the craft, he has no startling revelations about the writing process: “The adverb is not your friend.” “If you want to be a writer you must do two things: read a lot and write a lot.” “If you don’t have the time to read, you don’t have the time or the tools to write.” There are no limits on subject matter, “as long as you tell the truth.” “Avoid the passive voice. Omit needless words.”

No revelations there, but it never hurts to be reminded.

What’s new, and quite fascinating, is King’s analysis of what was really going on in some of his books. “There’s one novel, Cujo, that I barely remember writing.” Some blackout.

To readers, they may have been a writer’s imagination, but King says the kidnapper of Misery, the mind-possessing monsters in The Tommyknockers, and the haunting of the blocked writer in The Shining are symbols of his addictions.

A combination of events makes King news right now. He’s recovering from a near-fatal road accident last year. He’s the first big-time writer to totally bypass publishers and release a serialized novel on the Internet. And, in On Writing, he discusses his addictions in graphic terms.

Before a group of family and friends, Tabitha emptied his trash can onto the rug. Out poured, as King writes, “beer cans, cigarette butts, cocaine in gram bottles and cocaine in plastic Baggies, coke spoons caked with snot and blood, Valium, Xanax, bottles of Robitussin cough syrup and NyQuil cold medicine, even bottles of mouthwash.” Interventions are always tricky; this one worked.

King respects the darkness we all carry, and he’s not afraid to tap into it. The novel The Dark Half and his collection of essays on the horror genre, Danse Macabre, are filled with the importance of fearless examination of the things that lurk in the cellar. But now the horrormeister, the abandoned kid who did his early writing while living in a trailer park, is finally getting some respect from the literary establishment.