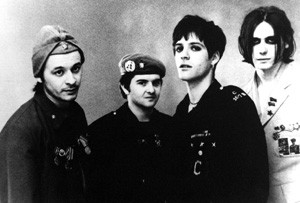 Glamour Pusses: The glam-punk legend of the Manic Street Preachers lives on.

There’s an old adage that goes something like this: If you have to choose between the truth and the legend, go with the legend. The Manic Street Preachers, who crawled out of a Welsh working-class town with plenty of defiant spit and fire to become the darlings of the British rock press in the early ’90s, left behind lots of interesting music and one helluva legend. And that’s the simple truth.

Now Sony/Legacy has released a deluxe 10th anniversary edition of the band’s 1994 album, The Holy Bible, a three-CD set that should take that legend to a new level. The lavish reissue features a digitally remastered version of the original album with four live bonus tracks; the previously unreleased U.S. mix of that original material, plus five bonus tracks (including two demos) and three radio session tracks; and a DVD containing six U.K. TV performances, four U.K. festival performances, two full-length music videos and a new 30-minute interview with the remaining band members discussing The Holy Bible.

The press used to liken the Manic Street Preachers to the Sex Pistols and the Clash, and the band did display lots of fiery energy. You could hear it on their 1992 debut album, Generation Terrorists (the Manics said at the time that any band with integrity should release just one album and then break up). But the band was a long way from the stripped-down hardcore punk of the Pistols or the Clash. In fact, there’s a strong glammed-up Queen influence to The Holy Bible, and occasionally shades of a big-hair Ian Gillian thing creeps into the songs.

The All Music Guide even compares the Manic Street Preachers to Nirvana, Oasis and Pearl Jam, but these songs exhibit none of the self-conscious ’90s sonic wash that marked those modern-rock bands. Instrumentally, the band is more Rush than Radiohead.

The appeal of the Manic Street Preachers at the time of the album’s initial release was that the band had nothing in common with the navel-gazing tripsters lighting up the Manchester scene, the Beatlesque pop of Oasis or just about anyone else in the U.K. To hear them now is to appreciate just how handily the Manic Street Preachers recycled the music they heard growing up and parlayed it into a unique sound while managing to build a legend that still looms large.

Most of that legend centers around the self-destructive antics of rhythm guitarist and songwriter Richey Edwards, an anorexic, depressed alcoholic capable of shock tactics worthy of ill-fated Sex Pistols bassist Sid Vicious (which may help explain the constant references to the Pistols in the British press). In 1991, during an interview with the British rock magazine NME, and after the interviewer questioned the band’s authenticity, Edwards carved “4 REAL” into his forearm with a razor blade.

Do you spot a trend?

In 1994, Edwards and his penchant for self-mutilation made headlines again when, at a Bangkok concert, he slashed his chest onstage with knives provided by a fan. So it’s no surprise that The Holy Bible is a troubling manifesto filled with stark and bleak lyrics. What is surprising, and not always immediately apparent beneath its hard-rock veneer, is just how incredibly intelligent the lyrics are. Such songs as “Of Walking Abortion” and “She Is Suffering” lay bare society’s shallow obsession with beauty and power, wealth and fame.

And the Manic Street Preachers never hesitated to tell fans to think for themselves.

“Do not listen to a word I say,” Edwards sings in the easy rocking “This Is Yesterday,” “just listen to what I keep silent.”

In the end, Edwards practiced what he preached: in 1995, just weeks after the release of The Holy Bible, he stepped out of a London hotel room and disappeared forever. The police found his empty car parked on a nearby bridge, a favorite suicide spot. His record company cancelled plans to release the album in the United States.

A decade later, the legend lives.