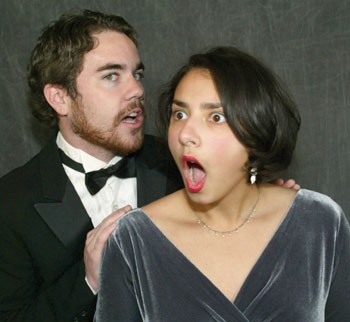 Something Wild: Daniel G. Thompson and Katy Birnbaum are among the madcap cast of ‘Rumors.’

Raunchy ‘Rumors’ funny if not classy

Of Simon’s three dozen or so plays, Rumors, which was first performed in 1988, might stand as his least significant, at least in terms of social relevance. Here, Simon deviates from his usual approach of mixing pathos with humor. It is also his most ridiculous and least believable play. That said, Rumors is very probably his funniest.

Without the patented Simon sentimentality to balance the raucously R-rated exclamations (“Fuck-a-doodle-doo!”) and the constant avalanche of gags, what we end up with is an over-the-top nonstop farce that literally begins with a bang and adds one personality-disordered character after another until all hell breaks loose in an outrageous and side-splitting finale that somehow includes a rambling soliloquy packed with wacky slapstick. In the Santa Rosa Junior College’s production, directed by Wendy Wisely, the first-rate cast attack this material with a purity of focus and energetic dedication that is usually not seen outside the Olympics.

Working with a script that demands its cast to run up and down the staircase every few minutes slamming doors and dropping one-liners as various snotty rich people suffer whiplash, gunshots, temporary deafness, skillet burns, steak-knife wounds, bloody noses, nicotine cravings, bad dancing, death-defying deceptions and, in one case, the near-sexual love act with a very large crystal, this is the kind of thing that only works if the actors steadfastly refuse to hold back.

These people don’t hold back.

Rumors takes place during a dinner party that has gone wrong before it has even begun. Married lawyers Chris and Ken Gorman (Deidre Ferro and Kevin R. Bordi) are among those invited to the home of Myra and Charlie Brock to celebrate the Brock’s 10th wedding anniversary. As the play commences, the Gormans, having arrived just in time to hear a gunshot in an upstairs bedroom, find the house empty except for Charlie, deputy mayor of New York, who has apparently shot himself in the earlobe and taken a Valium overdose in a failed suicide attempt. Myra is nowhere to be found, and the kitchen staff have vanished before finishing the dinner.

As the other hungry guests arrive in pairs, the increasingly panicked Gormans–fearing a career-ending scandal for Charlie–try to cover up the situation by inventing an outlandish series of lies, intercut with their own rumor-fueled speculations as to what really occurred.

Each new couple, of course, bring their own problems. Claire and Lenny Ganz (a hilariously composed Elaine Kozlowski and the pitch-perfect Khalid Shayota) have just experienced a hit-and-run car accident, leaving Lenny with a case of whiplash that makes him walk funny for much of the play, to the bemused indifference of his wife. The upper-class Ganzes have perfected the art of below-the-belt sarcasm, but while they revel in their suspicions that something naughty has been going on (is Myra having an affair? or is Charlie the cheater? if so, with whom?), once they are clued in to the situation, the caustic couple become the Brocks’ most impassioned defenders.

To the mix and the mix-ups, Simon adds the Brocks’ analyst Ernie Cusack and his cooking-show hostess wife, Cookie (Robert Campbell and Brooke Wallace). Finally, someone who can cook! Also arriving are the constantly battling Glenn and Cassie Cooper (Daniel G. Thompson and Katy Birnbaum), and eventually a pair of cops played by Terrence Garner and an actor whom the program identifies as simply “Liberty.”

Every new character brings something strange and special to the proceedings, and all cast members hold up their part, no matter what specific humiliation is required. That it all comes together in the end, as Lenny improvises an outrageously plausible explanation for the various gunshots and car crashes and mysterious disappearances of the evening, and that any group of actors can commit themselves this completely to so silly an endeavor, is nothing short of breathtaking–and fully deserving of a large audience for the remainder of the run of this ridiculous, hilarious show.