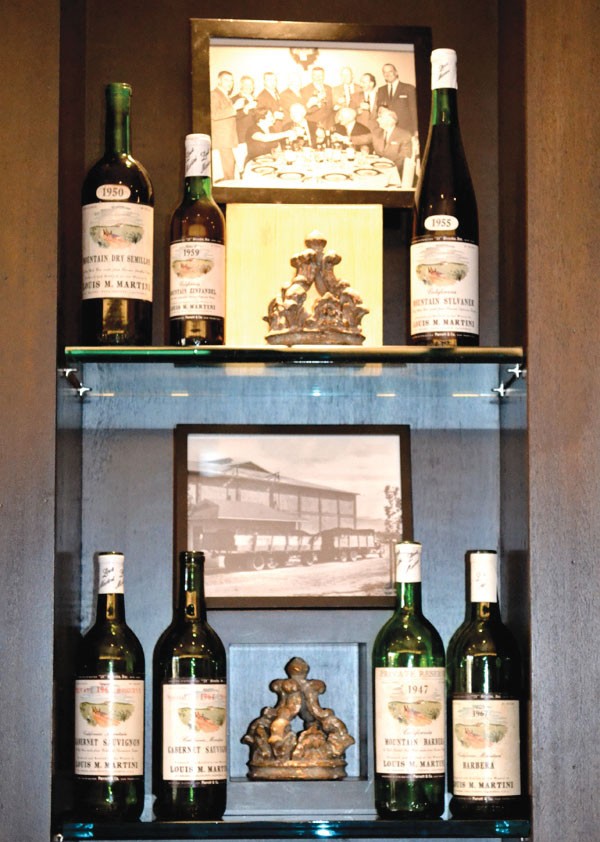 Looking for a peak experience from Cab mountain

If the Cabernet Sauvignon from Louis M. Martini’s famed Monte Rosso vineyard needs no introduction, none is offered, either.

Seen one way, the lack of background information offered by the otherwise friendly and attentive staff at this tasting room, located on St. Helena Highway where the 80-year-old winery was founded in 1933, could be taken for what we moderns call “a positive.” If, as advocates of blind tasting would have it, knowing absolute nix about a wine is crucial to an honest organoleptic appraisal of it, then this is a very savvy strategy indeed, stroking the wine taster’s sense of dignity with a touch as light as a morning breeze. If, on the other hand, the goal is to sell the uninitiated on an $85 wine from a mountain site with an incomparable view and a rich history—I don’t know, maybe the air’s getting a little thin up there.

One thing’s for sure: the ladies who just sidled up to the bar on my right will not start their session with a nice white. The bottles of 1950 Mountain Dry Semillon and 1959 Mountain Sylvaner behind the bar are just for decoration; these days, besides a Moscato dessert wine, you can have any color of wine you want, as long as it’s red.

Dubbed the “King of Cabernet” by none other than Robert Mondavi, the enterprising Louis M. Martini first set up shop during Prohibition, making totally legit sacramental wine and grape concentrate. Around 1938, he purchased and renamed the Mt. Pisgah vineyard “Monte Rosso” for the color of its volcanic soil, and planted Cabernet Sauvignon. The winery sold to the Gallo empire in 2002, the deal “sweetened” with a microwinery where third-generation winemaker Mike Martini makes limited release wines like the 2010 Cellar No. 254 Meritage ($65), a big, chewy blend of Cabernet Sauvignon et al. that sticks to the palate like a chocolate mint cookie.

Visitors may also enjoy the 2011 Cellar No. 254 Petite Sirah ($55) while seated at shaded tables just a few yards from the Thomann Station vineyard from which it’s sourced. The 2008 Monte Rosso Cabernet Sauvignon ($85) is the main event here, with aromas of medium-plus toasty oak, cocoa truffle dusting, saddle leather and sweet raspberry, with flavors of Cabernet fruit leather. Would that there was such a snack. This brand’s grand old flagship vineyard, just by the by, is located in Sonoma Valley—as you’ll learn by looking very closely at the bottle.