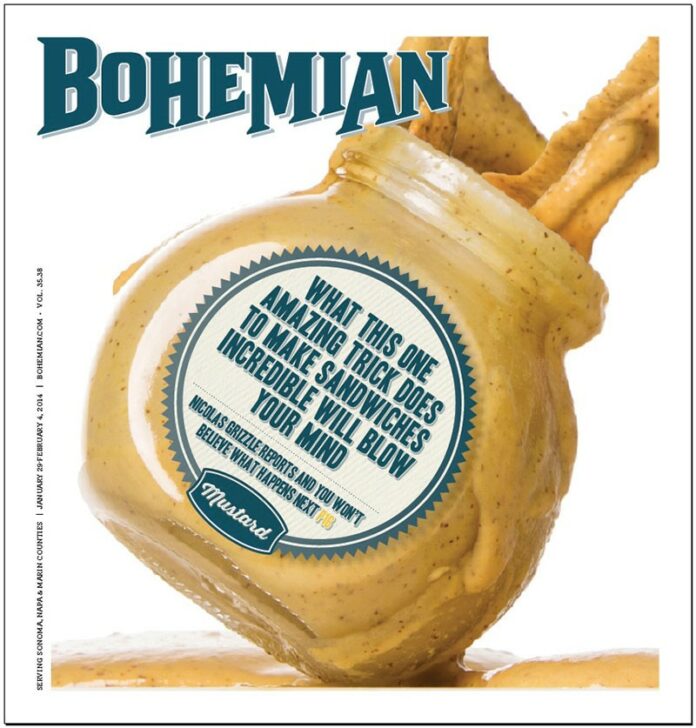 ‘Mustard!?” exclaims the Mad Hatter, after adding butter, jam, salt and sugar to the White Rabbit’s comically oversized pocket watch in Disney’s Alice in Wonderland. “Let’s don’t be silly!” But with mustard’s endless styles and desirable flavor, fixing a pocket watch may be the only thing this superior condiment cannot do—and its connection to the North Bay runs deep.

“Prepared mustard goes back to the 15th century,” says Michele Anna Jordan, a Sonoma County author with over 20 cookbooks to her credit. And the foundation of the spreadable gold itself dates back even further. “The mustard seed goes back to pre-biblical times, and that seed contains so much flavor.” It’s a heritage that once spawned an entire local festival celebrating the immense value of just one tiny seed (alas, the Napa Valley Mustard Festival has been on hiatus since 2012).

Some say the bright fields of yellow first came to Sonoma County thanks to a Franciscan missionary who spread the seeds as part of his landscaping duties at the early churches in the area. That’s cute, but the more likely story is that mustard arrived here with other foods, like grains, on a shipment long ago, making it an invasive species. Both black and field (yellow) mustard are classified as weeds, despite their beauty and nutritious qualities. According to the California Invasive Plant Council, the turnip relative cannot be eradicated by a simple lawnmower job, and inhibits the germination of native plants.

But the bright flowers contrast beautifully with the green grass, creating a visual bridge to the region’s vineyards, which are just starting to green when the mustard blooms. They’re an inspiration for countless oil and watercolor paintings, and it’s not uncommon to see cars pulled over on Highway 12 or Petaluma Hill Road to admire the rolling hills of yellow and green. Another good thing this invasive weed has going for it is that it keeps away harmful nematodes and other unwanted soil dwellers, giving added protection to vineyards.

Mustard is made from mustard seeds, mustard powder, vinegar, water and salt. Of course, there are different varieties; sometimes it’s hard to believe sweet Zinfandel mustard and Chinese mustard are based on the same condiment, and modern times have spawned wild innovations like wasabi horseradish and hickory bacon mustard. “There are a hundred different ways to make it,” says Dennis Dunn, who makes his own stoneground beer mustard and sells it at the Santa Rosa farmers market. (No surprise that it goes perfectly with the sausages he also sells for his brother’s company, Diavola.)

Grinding is the key, says Jordan, whose out-of-print 1994 book The Good Cook’s Book of Mustard will be updated and rereleased next year. It’s the difference between true Dijon and paltry imitators. “True Dijon style from France—taste it next to American versions, and you’ll notice a difference in texture,” she says. “They’re very secret in how they do things, but from what I could ascertain, the mustard is ground between two steel plates.” The secret seems to be contained in the ratio of pressure per square inch, but Jordan still isn’t 100 percent certain. She tried to find out how Grey Poupon does it, but, she says, “They won’t let anyone watch the process. I tried really hard.”

“People can make mustard at home pretty easily,” says Duskie Estes, award-winning chef at Sebastopol’s Zazu. Her husband, John Stewart, makes mustard at the restaurant by soaking the seeds in Guinness. The final creation gets slathered on their pig’s heart pastrami sandwich with homemade sauerkraut. “I would love for him to make one with Tilted Shed hard cider,” adds Estes.

Estes is a fan of mustard, especially on burgers and corn dogs. Her daughter loves it on hot pretzels. “It’s got great acid, and sometimes heat,” she says. When the plant is in bloom, Estes likes to use mustard flowers as garnish. “It’s one of my favorite things, just driving around Sonoma County and seeing the mustard everywhere,” she says.

NO NEED TO GET FANCY

Not everyone needs a fancy mustard to get by. “I like brown mustard,” says Ralph Morgenbesser, whose Courthouse Square hot dog cart has been a fixture of downtown Santa Rosa for over 25 years. “Most people like brown. But you’d be surprised how many people still like yellow mustard.” Morgenbesser, who hails from Brooklyn, has strong opinions about hot dog toppings. Chicago dogs with pickle spears and tomatoes? “I don’t want a salad on my hot dog,” he says. But the Big Apple and the Second City can agree on one thing: no ketchup or mayo allowed (he does offer them, but never partakes). He tried offering new condiments, like mustard-and-onion sauce (sautéed onions in mustard with some crushed tomatoes), but says nothing has approached regular mustard in terms of popularity.

Not everyone even needs mustard. John Vrattos, owner of Yanni’s Sausage Grill in Penngrove, says he doesn’t allow condiments on their house-made meat torpedoes. “You wouldn’t put mustard on a pork sausage with spinach and feta, would you?” he asks. But after four years, he’s relented to the demands of his customers—somewhat. “We’ll give it to them,” he says, “but we say, ‘Take two bites without it, and if you need it, we’ll give it to you.’ Nine times out of 10, they don’t need it.” He concedes the one sausage that does have mustard is the “naughty brat,” but it’s a seasonal special.

With so many different flavors and styles, why is yellow mustard the default in America? Manufacturers realized that Americans like flavors to be on the plainer side, and French’s released a very basic version of the classic condiment to great success. Other companies followed suit, and a uniquely American take on an Old World condiment was born.

Jordan has several recipes that use mustard as a key ingredient, as well as her own recipes for the condiment itself. “I love mustard as a base of flavor,” she says, listing ingredients for her cream of mustard soup, which is still served at Santa Rosa’s Cafe Europe after her Good Cook’s Book of Mustard launch party there 20 years ago. She speaks with such appreciation for something that is taken as granted in everyone’s refrigerator door, the question came up: Is mustard the queen of condiments? “Most people would say that is ketchup,” she says, quickly adding, “but I wouldn’t.”

Yes, the pioneering brewery makes mustard. Just like its original strategy for beer, the company makes only a few styles: pale ale with honey, porter spicy brown and stout stoneground. The hops in the beer lend a fresh, sweet and aromatic experience to the mustard. The porter makes a good accoutrement, the popular pale ale can turn a normal ham sandwich into a gourmet deli lunch, and the stout stoneground transforms the lowly corned beef into an explosion of complex flavors. Something about brined beef fat mixes well with stoneground mustards, and this is certainly no exception.

Sonoma County’s Kozlowski Farms is well known for its jams and jellies, but they also make a fine mustard. Two fine mustards, actually: Ol’ Uncle Cal’s sweet and hot mustard and a Dijon honey mustard. These are best enjoyed with pretzels, either warm and soft or small and hard. They’re great in marinades and sauces, or brushed right onto glistening, dripping, flame-licked chicken thighs on the grill. The Dijon honey is made with Chardonnay and honey, while the sweet and hot is made with brown sugar and eggs for a creamy consistency.

Made in Fort Bragg, Mendocino Mustard produces two styles: hot and sweet, and seeds and suds. The former is a dangerously delectable treat with a vicious kick at the end (horseradish fanatics rejoice). Those preferring the savory side of life will be attracted to the seeds-and-suds style. The crunch of brown and yellow seeds mixed with the deep flavor of North Coast Brewing’s Red Seal Ale make it a gold medal winner, and it pairs well with red ale and fresh pretzels.

For almost 80 years, Beaverton Foods has been producing delectable condiments, but it’s most known in the North Bay for its Beaver brand mustard. Popular styles like Dijon, stoneground, traditional yellow and the sinus-clearing sweet hot are staples at local restaurants, and sausages just don’t taste the same without them. In fact, four types of Beaver mustards are brought to the table upon each order of bratwurst at Santa Rosa’s Third Street Aleworks. Lesser known flavors like hickory bacon, extra hot jalapeño and wasabi horseradish deserve love, too, and Beaver’s Chinese mustard is so hot, just thinking about it produces the specter of a full-mouthed sneeze. It’s embarrassing to think about, so just dive in head first to this mustard (don’t worry—it’s Kosher). The Oregon-based company also makes Inglehoffer, a German-style spicy Dijon with white wine. It’s an eye-opening kick to even the richest German schnitzel. As for local products, Beaverton also produces Napa Valley Mustard Company’s products, which include more refined selections like honey mustard with orange ginger and Dijon with herbs and garlic.