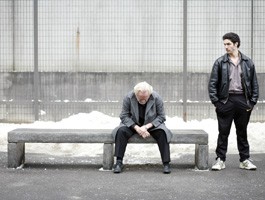 'A Prophet' follows a young man schooled in murder

Jacques Audiard’s harrowing story of a 19-year-old whose life is redefined by a six-year stint in a French prison has been compared in some corners to The Godfather, and the comparison makes sense on some superficial level.

Malik (newcomer Tahar Rahim) begins his exhausting two-and-a-half-hour journey as a fresh-faced petty criminal, penniless and alone in the world, a sheep condemned to live among wolves. He loses what remains of his innocence in short order. Commanded by Corsican mobster Luciani (Niels Arestrup, terrific) to murder a fellow Arab or suffer an equally gruesome fate himself, Malik reluctantly learns to kill, concealing a razor in his cheek and clumsily slashing his victim’s throat.

The episode stays with him—he’s haunted by visions of the man whose life he stole—but it never seems to inform the other choices he makes behind bars. Malik embraces his supposed rehabilitation, learning to read and write, carrying out menial errands for his newly anointed Corsican protectors. But his education doesn’t stop there.

Over time, Malik shrewdly injects himself into the prison drug trade, eventually establishing himself as a gangster equal in stature to the aging Luciani. The boy who shuddered at the prospect of killing becomes a man for whom it’s a lifestyle. He works his way up the jailhouse food chain, climbing over the corpses of his competitors along the way.

Malik is no Michael Corleone. He is graceless and, more often than not, resistant to introspection. But he is every bit the opportunist, a scrappy apprentice taught too well by Luciani, who takes him under his wing. Malik’s ascent isn’t exactly triumphant—he survives several brushes with death—yet his increasingly complex criminal enterprises, even at their most brutal, seem vested with a perverse logic. In planning for a post-prison future, what choice does he have?

We are grateful for Malik’s survival, but the violence that becomes second nature to him is nothing to celebrate, something Audiard (The Beat That My Heart Skipped) understands. A Prophet is no fairy tale; there are neither heroes nor villains, merely men married to a desperate career path, some by choice and others by necessity, all fighting to eke out an existence. Malik proves better at it than most, but his tragedy is a depressingly common one: to save his life, he must sacrifice his soul.