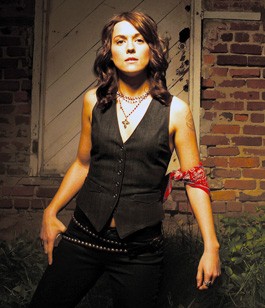 Now 28, Brandi Carlile has come a long way from her teenage years busking on street corners and playing restaurants in exchange for food in her native state of Washington. Since the 2007 release of her second album, The Story, which has sold more than 313,000 copies and been prominently featured on Grey’s Anatomy, Carlile and her band have played to adoring audiences across the country, drawing raves for her rich country-tinged voice and energetic live performances. She plays a sold-out show at the Mystic on March 13.

“I think it created an interesting vocal style,” Carlile says by phone from her tour bus in Lexington, Ky. “Any uniqueness to my voice at all—it’s just that you can’t tell which one of those artists I’m mimicking at any given time.” As a kid obsessed with music, she says she would wait until everyone left the house so she could practice hitting the high notes on songs by Cline, K. D. Lang and Roy Orbison.

“I just loved it so much,” she recalls. “I wanted to get better and be the best. I spent a lot of time practicing by myself, because you don’t want anyone to hear you practicing singing out loud or yodeling.”

At 14, Carlile became a back-up singer for an Elvis impersonator, an experience she describes as a milestone in her evolution as a performer. Repeated viewings of Elvis videos and movies taught her not only about vocal harmonies but also the importance of showmanship. “I realized that he had a respect for the people who came to see him, like no one else did,” she says, “and that’s why he moved that way, that’s why he dressed that way and that’s why he talked to the crowd.”

Carlile and her band are currently touring in support of their third album, the Rick Rubin&–produced Give Up the Ghost, which features a guest performance on the buoyant anthem “Caroline” by Sir Elton John himself. Recorded with Carlile’s longtime band mates—the twin brothers Tim and Phil Hanseroth, who work closely with Carlile on songwriting duties and have backed her since her 2005 self-titled debut—Give Up the Ghost comprises of a solid mix of rollicking pop songs, from the soaring album opener “Looking Out” to more down-tempo ballads like “That Year,” a melancholy meditation on a friend’s suicide.

Carlile calls these songs “time travelers,” explaining that her songwriting process is driven by a desire to write songs that stretch beyond her present experiences as a touring musician on a rigorous schedule. She laughs, aware that songs about Starbucks, tour buses and sound checks might not make for great art.

While the band has worked steadily to reach this moment of success, Carlile says none of it has felt like work so far. “To me, all I ask for is music,” she says. “Whatever happens as a result is bonus. I look back on it, and, yeah, it does feel like a lot of work. If I had to go busk right now, I might not have as good a time, but when I was busking, it was a great time, it was a blast. It was the best six hours of every day. So it doesn’t look like work, from where I’m standing.”