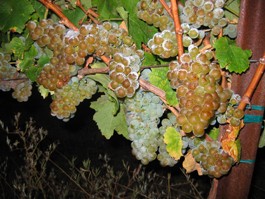 How Sweet Is Dry?

After years of popular neglect, Riesling begins to get the cred it deserves

Like the resurgence of good manners, rumors of Riesling’s comeback are regularly heralded and often exaggerated. A noble European grape, Riesling seems like some jet-setting, down-on-her luck baroness, one minute the star of sushi bars worldwide, the next, sharing the company of cheap swill on the bottom shelf. Riesling and Chardonnay have long been recognized as the two reigning white grapes of the wine world. Chardonnay remains ubiquitous. So what happened to Riesling?

Riesling has everything people are supposed to want in a white. It’s naturally low in alcohol, it’s food-friendly—and it’s not Chardonnay. Furthermore, Riesling is not always pancake-syrup-sweet. As consumers overcome this and other misconceptions, interest continues to grow. Sales have increased so fast in recent years that wineries now import bulk wine to keep up, giving us curious California wine labels with the appellations Pfalz and Rheingau. Riesling is often sold as the wine that goes with sweet and spicy Asian foods. But with the advent of small-producer, dry Rieslings that show terroir with more crystal clarity than Pinot Noir, that is just the beginning.

“We had to pass up an entire generation that looked down on Riesling,” says Smith-Madrone Vineyard’s Stuart Smith. A flood of cheap Blue Nun and Liebfraumilch in the 1970s eroded the status of once-respected German wines in general, and Riesling was collateral damage. Smith blames an overripe 1973 harvest at Freemark Abbey for the creation of a super-sweet California style that consigned Riesling to the end of the wine list.

“On the other hand,” says Greenwood Ridge winemaker Allan Green, “that bias disappeared some years ago. For a lot of the wine drinkers coming up now, that’s before their time.” Still, Riesling is a sobering lesson in supply and demand. It occupies fractions of shelves, facing encroachment by Gewürztraminer and even Grüner Veltliner. Yet sales data collected by the Nielsen company have shown faster growth than other varietals.

Marin vintner Jonathan Pey sells a tiny portion of that, but is excited about Riesling’s upswing, noting “in the 2000s, every single year has seen double-, triple-digit growth, but the base is pretty small when you peel that apart.” In honor of the varietal’s burgeoning growth, several area restaurants and even one wine shop are participating in Riesling Week, June 16&–22, organized by Wines of Germany.

In Santa Rosa, Zazu has its Riesling down. “We’re Riesling nuts here, we love Riesling,” says Duskie Estes, co-chef and -proprietor of Zazu and Bovolo restaurants. “Wednesday through Sunday, we are going to offer three Rieslings by the glass and a tasting flight.” Food pairings include Zazu’s own house-cured black pig salumi with pickled cherries, rabbit sugo strozzapretti and veal Wiener schnitzel.

But for many, Riesling is stuffed in a bento box. Without a doubt, it’s been overtly linked to Asian foods for several decades. Washington state’s K Vintners’ “Kung Fu Girl” Riesling features calligraphic label art and a bowl of rice with chopsticks on the back label. Originally launched by Bonny Doon Vineyard, Pacific Rim Riesling comes in clearly labeled dry and sweet styles—a helpful innovation. On the label, a geisha emerges Venus-like from an oyster shell, with a menu and chopsticks at ready. Images of sushi swim across the salmon-pink-pastel-themed bottle. Is this wine gendered?

It’s understandable that people associate sweet wines, light in alcohol and perfumed in apricot flavors, with the feminine. More importantly, wines are often associated with the food of regions from which the vines originally sprang. Chianti with pasta, red Burgundy with, well, beef Bourgogne. Surely Riesling needn’t be confined to a straightjacket of seaweed. Knockwurst, anyone? Surely no wine stands up to sauerkraut like Riesling.

The old hofbrau-style restaurant has been in decline for decades, but Santa Rosa’s popular Cafe Europe offers a California/German menu with several Rieslings. “Sauerbraten goes great with it, all of our bratwurst, fresh fish, seafood pasta,” says server Dan Regan. “But as far as German wines, we don’t sell a lot.” They steer diners toward popular wines like La Crema Pinot Noir.

Back when Pinot Noir was being codified as the grape of choice in Burgundy in the 1400s, Riesling took its place in the Rhineland (although it’s likely much older than that). A popular choice in 1800s California, Riesling was called white Riesling or Johannisberg Riesling. Adding to the confusion is the entirely different gray Riesling, not to mention the formidable gallon jugs of “Rhine wine.”

Back in 1978, Stuart Smith argued that since he didn’t ask Germans to label their wine “Smith-Madrone Riesling,” why should he call his wine Johannisberg, which is actually one picturesque winery near Geisenheim? After a decade of haggling with the BATF, Smith-Madrone pioneered varietally labeled Riesling. Now it’s the standard, and in an ironic twist, today a Washington state winery is fighting the Fed to keep its “Johannisberg” moniker.

As might be expected from its continental origins, the Riesling vine is cold-hardy, and the grapes, which turn from green to speckled gold as they ripen are the last to be harvested; in the case of “ice wine,” it’s well into winter. A long, cool growing season is best for Riesling, one of the reasons California has so drastically abandoned the varietal since the 1980s. Washington and New York grow far more, and Canada’s production of the ice-wine-style nearly eclipses Germany’s.

That’s not to say there aren’t cool areas with great potential, such as Greenwood Ridge’s vineyard in the hills above Anderson Valley. Asked about the potential for new, great Riesling sites, Allan Green says we’re unlikely to find out. Pinot mavericks can micromanage exquisite coastal sites and then command high prices, while Riesling, which may well flourish in cool and marginal sites, is woefully underexplored. “It’s tough to make money on,” he admits.

A passion for the cultivar is what keeps explorers like Jonathan Pey going. “We make Riesling because we love it. We grew tired of oak-bomb, high-octane Chardonnays that overpowered our meals and our senses after the first glass,” he says. “We found Rieslings from Germany, Alsace, New Zealand and Australia to be so much more diverse and interesting, and most of them are much less expensive than those big, fat Sonoma Coast Chardonnays.”

Pey’s wine has received scores in the 90s and gained a reputation as one of the finest examples of the “new” trend in dry Riesling. The growing season is long but cool in the cow-studded hills of West Marin, and the Peys are happy to get a few tons to the organically farmed acre. “Once it’s in the winery, I don’t do anything to it,” Pey says. “Literally, I mean, zero.” Riesling is said to be one of the most utterly transparent varietals in terms of expression of terroir. California vintners say they don’t aim to achieve an Old World ideal, instead coyly declaring, like Pey, “Nor can European vintners replicate my Pey-Marin Riesling!” Smith echoes the sentiment, declaring, “We make the finest Smith-Madrone Riesling.”

The real beauty of Riesling is its enticing floral aroma and a palate profile from austere minerals through tropical fruit that is every bit as subtle as Pinot Noir. The California sun pulls flavors of nectarine and peach from the grape. Older Riesling may display a not-unpleasant—no, really—”petrol” or “diesel” aroma. Why doesn’t great Riesling taste hot, with low pH and buckets of acidity? Because most Rieslings have a low alcohol content. Perfectly ripe wines may come in at 8 percent, lower than many a California IPA. When acidity is dumped in a 14.8 percent Chardonnay steeped in new oak, there is a scorching fireball of wood and buttery acid.

If there weren’t already enough hurdles, affordable Riesling may not be expensive enough. Smith tells the story of a Los Angeles restaurateur who was impressed by the wine. When Smith told him the price, he said, “Too bad.” The man explained that at that low price, it wouldn’t be taken seriously in his restaurant—and waitstaff are not inclined to recommend something that does less for their bottom line.

But Smith says he’s been “pushing rocks up hills backwards” all his life. He and his brother founded their winery in the mountains above Napa Valley 25 years before others returned. By then, Riesling, widely planted through the 1960s, had been replaced by Cabernet. Nowadays, when Smith-Madrone re-releases older vintages for $60 a bottle, they are snapped up.

At the Bottle Barn, the North Bay’s largest wine shop, buyer Jason Schneider says that while interest is still high, Riesling buying actually peaked two to three years ago after a wave of great vintages. Little wonder. The hot summer of 2003 brought temperatures that made Europe ripen grapes like it was California. In a rainy fall like 2006, farmers bring in loads of brown mush that would break the hearts of California growers and assign them to everlasting shame.

Pey asserts that Riesling is “arguably the greatest white wine for food in the world,” and suggests it be paired with fresh, local foods wherever it’s made. “Try it with duck and choucroute in Alsace, grilled barramundi in Australia, green-lipped mussels in New Zealand, pork and potatoes in Germany—or try Pey-Marin Riesling with Hog Island oysters,” he adds, “both grown within about 10 miles from each other right here in Marin County.”

Greenwood Ridge’s Green says that while he is not a beer drinker, Riesling stands in. “Any of the foods that pair well with beer are Riesling-friendly to me, like Mexican food and curry. It has a quenching attribute that is similar to beer; Riesling holds its acidity well. It’s a much more versatile food wine than Chardonnay,” Green says. “One of the reasons I like Riesling is that you can make it from completely dry to very sweet, and you can make good wine all the way.”